Most reporters don't have millions of YouTube subscribers or the ability to make a 60-second video go instantly viral, but then again, today's interview with President Obama wasn't your typical Q&A -- which is precisely why it was a game changer.

In a major win for political youth engagement, three of YouTube's most popular stars sat down with POTUS himself Thursday in a livestream where they asked him questions amassed through their followers using the hashtag #YouTubeAsksObama.

Vlogger Hank Green was up first, asking the president about drone technology, North Korea and marijuana legalization. Next, GloZell spoke up about police brutality and same-sex marriage, while 19-year-old Bethany Mota concluded the session by touching upon cyberbullying and the power of young voices.

But perhaps more important than the topics discussed, the livestream made teens feel like actual political participants and part of the conversation. Ground-breaking, indeed.

Below, we've rounded up the best, most magical moments from the livestream.

1. When Hank looked extra dapper in a blue button-down and tie.

2. When POTUS used a copy of "The Fault in Our Stars" to sign Hank's prescription receipt.

3. When GloZell asked POTUS how we can bridge the gap between African American males and white cops.

4. When GloZell hilariously referred to FLOTUS as the "First Wife" by accident.

No worries, Glo. We know what you meant.

A gift for President Obama's "first wife": http://t.co/2diTTNHkJQ via #YouTubeAsksObama

5. When GloZell brought green lipstick for Obama to give to FLOTUS, Malia and Sasha.

6. Bethany's adorable interview set-up, which included cut-out stars, owls and a photo of her niece.

Stop being so cute, Beth.

7. When POTUS said this:

"Your voice is more powerful than the President of the United States." President Obama to @BethanyMota. Wow. #YouTubeAsksObama

8. When POTUS revealed what super power he would have.

beth: if you could pick any superpower what would you choose?
obama: the flying thing

9. And when they all took a group selfie at the end. 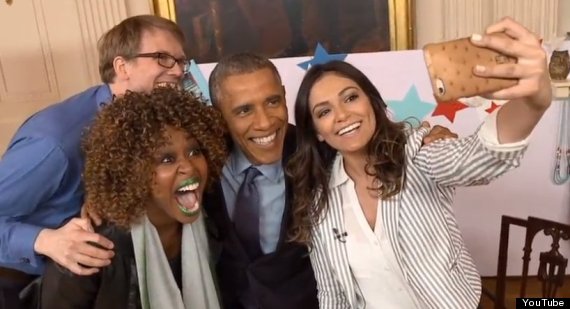