One gag gift we wouldn't ever want to receive? A glass that "surprises" drinkers with the message "you've just been roofied" when they reach the end of their beverage. Etsy seller ThatGlassStore, which specializes in custom sandblast etching, stirred up some ire on Facebook after a user noticed the item for sale.

This glass holds a suprise for the unexpected person drinking from it. When they tip up the glass and get to the bottom the message reads "You've Just Been Roofied" You can have any variation we have listed or make up your own.
This makes a great gift for the person who has everything. All of our glass is sandblasted for a deep professional etch that will last forever.

Because drugs primarily associated with the date rape of women are hilarious?

Etsy user Emily noticed the glass and sent the sellers, Rickell and Charles Robbins, a message. She shared that message and the response with The Huffington Post: 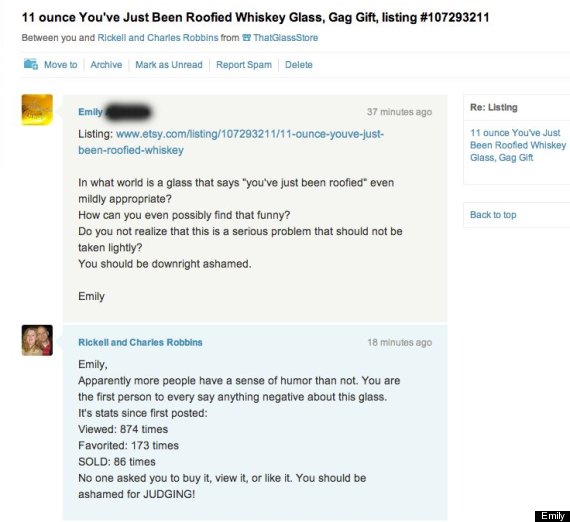 Charles Robbins told The Huffington Post that this was the first complaint they had received about the glass in over a year of it being listed. After receiving Emily's message, they decided to reevaluate the listing, remove the "you've just been roofied" photo and change the name of the glass -- though still sell the product -- because, as the Robbins communicated to both HuffPost and Emily: "we are not hateful or hurtful people and if this glass offends one person or hurts one person that is one too many."

However, this morning The Huffington Post received a follow-up message indicating that the Robbins had decided to reactivate the original listing despite the couple of complaints. "My wife is thoroughly irritated that people can't see this for what it is...a gag, a joke," wrote Charles Robbins. "It's ok for stores like cafepress and spencers to sell similar items and no one thinks anything of it. It doesn't promote rape, it doesn't promote anything. If people don't like it voice their opinion, this is America and we have a right to voice ours."

Personally, we'd much rather see these DrinkSavvy glasses -- which actually detect when certain date rape drugs have been put into a drink -- being sold on Etsy than ones that make light of sexual assault.

What do you think of the "You've Been Roofied" glass? Let us know in the comments!

Etsy had not returned our request for comment at the time of publication.

1 / 6
#1: Vaginal Douches
Here's the thing: In addition to having the power to usher actual human beings into the world, vaginas also have their own distinct scent. "A healthy vagina will usually have some sort of smell, but the scent may vary day-to-day depending on how active you are," <a href="http://www.cosmopolitan.com/advice/health/vaginal-odor#slide-1" target="_blank">Cosmopolitan explains.</a> Vaginal douches are generally marketed to women as means of reducing that perfectly healthy and natural odor, fueling totally unnecessary insecurities. Added bonus: They're not safe! "Repetitive douching disrupts the normal organisms that reside in the vagina and can actually increase your risk of vaginal infection," explains the Mayo Clinic. In other words, douching puts women at risk for certain infections that can actually lead to unwanted odors and discharge. Just say no.
Getty