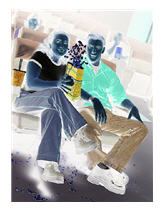 Ever since my parents threw my brother and me into the back seat of the station wagon for films like Benji and The Bad News Bears, I've loved going to the movies. My particular fascination: horror films.

I saw Burnt Offerings at eight, The Shining at 12, and now see everything from Wes Craven thrillers to Eli Roth gorefests to virtual verite' spookers like The Blair Witch Project and the current Paranormal Activity.

But NO MORE. After sitting through a showing of Paranormal last Sunday, I vow never again to see movies in theaters, especially horror films

I'm giving up on the movies...because of YOU.

YOU, the self-centered, inconsiderate, manner-challenged, moronic audience who follow me from movie to movie. YOU, the man or woman, young or old, black or white moviegoer who just won't SHUT THE $%#& UP while the movie is playing.

Movie-talking has gone from the occasional annoyance to the expected norm. Just going to the movies now makes me tense. I assess each person who walks in -- will it be you who talks back to the screen? You who cracks jokes to you friends? You who laughs loudly and inappropriately? You who decides to take that call?

I can't always identify the Joe Wilson of my cinema experience beforehand, but it's now inevitable that someone will fill that role.

During Paranormal, a gaggle of teenagers arrived late, called out to each other, negotiated seats, swapped placed constantly, and chatted incessantly. Behind me, two 20-something were engaged in a constant play-by-play critique of every scene: "Why don't they just leave? A hotel would be a good idea. They should just get a hotel room."

All around me, people were texting and twittering, their devices distractingly glowing like lighters during a rock ballad.

I've tried to reason with you, making both polite pleas and soft-to-loud shushes, but you just don't get it. To you, the movie theater is your living room, a sports bar, a Dave & Busters, a political town hall meeting. You can do as you please and everyone else has to just put up with it.

So I'm waving the white flag. I cede the movie theater to you, the egocentric army of inconsideration (with whom Paranormal's besieged and idiotic couple would probably feel right at home).

Just know, I think a hotel would have been a better idea.

Joel Schwartzberg is an award-winning essayist, horror screenwriter, and author of "The 40-Year-Old Version: Humoirs of a Divorced Dad" who has no trouble sleeping after or even through Paranormal Activity.