Kevin originally posted this in his blog, MyMediaDiary.com.

Granted it's a zombie apocalypse; granted it's exhausting peeking around every corner; granted Atlanta in the summer without air-conditioning is brutal. But come on, let's have a little levity.

There's a fine line between tragedy and comedy. Shakespeare knew this as he preceded the haunted and soon to be hysterical Hamlet in the graveyard with a pun-contest with a local gravedigger. Even Mercutio, after he was stabbed, found time to squeeze out a groaner: "Ask for me tomorrow and you shall find me a grave man."

And what works for the Bard, certainly bears true for three of my favorite dramas.

In Justified, Timothy Oliphant's Raylan is sentenced to his home town of Kentucky after going all Dirty Harry in the opening scene of the opening episode. He is forced to not only deal with his childhood buddy and current supremacist outlaw Boyd Crowder, the most verbose, eloquent, polite and delightful psychopath you'd ever want to meet but he also has to endure his dill-pickle father who repeatedly tries to kill his son and his non-biological father (and boss) Art.

Oliphant's character, like his Eastwood-ish turn in HBO's euthanized masterpiece Deadwood, has the scary calmness, good looks and wisecracks found in famous mayors of Carmel everywhere--prior to monologues with chairs at nationally televised conventions.

Perhaps the most ambitious and perfectly balanced series is HBO's The Wire. After being told to see it a couple hundred times, I finally dove in last winter. A week or so later, all five seasons with (different locales and even different variations of theme songs ) I was so hungry for more that I just watched them again. And if you only see one of the five seasons (and you can almost see them all independently) bask in Season Three--when one fatigued Major "Bunny" Colvin decides to legalize drugs in certain abandoned city blocks and therefore clean up the rest of his corners.

The magic of The Wire is its depth of development despite storylines that follow at least seven different characters each season. And with each incredibly real personality, whether it's McNulty the alcoholic, divorced, womanizing, too-good-at-his-job-bad-at-life mirrored in Dennis Leary's Tommy in Rescue Me or my favorite, Omar, the scar-faced, whistling, shotgun-toting Robin Hood, you get humor along the way--the way you hear some of your best jokes at funeral homes. Life's like that; it's the pressure release valve.

The premise is funny and tragic enough--an excellent secondary teacher trapped in a non-supportive state for public education who has terminal cancer and stumbles upon a former lousy student who serves as his gateway drug into organized crime kingpindom. The final episode, thankfully, puts Walter White in the land of self-honesty when he admits to his wife that he did it all, not for the family, but because he liked it. Without that line (and the brilliant poison-in-the-sugar-rack) the series would have only felt half-completed.

But the supporting characters provide the laughs and tears. Jesse Pinkman's constant use of "Mr. White" is cute, weird and completely accurate--how many of us meet our former teachers and would ever dream of using their first names? Gus, the drug-dealing, low-profile template that Walter hopes to emulate is coldly unemotional and therefore funny in his under-reaction to all circumstances--including his own self-poisoning--until he finally cracks seconds before the old "bell-on-the-exploding-wheelchair-trick" does him in, but not without a graceful tie-straightening exit.

Gus's right-hand-hit-man, ex-cop Mike, has the greatest comic lines as he is baffled by Walter's blend of Don Knotts and Vito Corleone. But more accurately, he is tired of Walter's talking, rationalizing and collateral damage--as he too dies and wants Walter to "Shut the f___ up and let me die in peace."

And when Mike and the spin-off bad man lawyer Saul Goodman are talking to one another or to Walt you're bound to hear many, many great one-liners and necessary laughs.

So with The Walking Dead--what to do, what to do as Season 5 comes trudging along toward us this October?

Last year I attended the Motor City Comic-Con with my son and daughter and saw a line reserved usually for roller coasters. It was wrapped around six times with folks waiting for an autograph or a chance to shake hands with Darryl, the crossbow hunting cracker, played beautifully by Norman Reedus. He was appearing alongside two of his co-stars from Boondock Saints who were coat-tailing it along with the success of the zombie drama.

Darryl and his now late-brother, and bigger cracker, Merle are the closest thing this heavy-metal drama has to comic characters--and even then, it's like an episode of Hee-Haw, where the characters die by their stills. Everyone and everything else is solid pain and suffering.

I'd like to think that once in a while, whether I'm trapped in a safe prison or sharing some moonshine in an abandoned shack, I'd hear a joke or two. But not in this part of Dixie. There is no Saul Goodman giving Jesse a Hello Kitty cell phone, no Detective Bunk cutting a tie off a sleeping co-worker, no jumpy Dickie Bennett with a baseball bat hanging up Deputy US Marshall Raylan Givens like a piñata.

Nope. Nothing but slow-walking, loud-breathing zombies that one can outwit with a stone-throw, a duck call or an armless, jawless former-friend on a leash.

Even the real enemies, the same ones that Steven Spielberg points out in Jaws, Close Encounters, E.T., and Jurassic Park, the "normal folk" in Breaking Bad are not really worth watching. The first half of the last season offered the sanctuary of the benevolent "governor" that was only as safe as the utopian rabbit warren of Strawberry in Watership Down. But I was hoping that the boring old dictator would at least have some funny one-liners, even after he lost his eye to a samurai sword. But no. (Even Watership Down had a wise-cracking seagull with a funny foreign accent.)

And the second half of Season Four, painfully slow in its isolated stories of the splintered groups who escaped the demolished prison all plodded along to Terminus--another sanctuary that is also not what it appears.

"They're screwing with the wrong people." Fans of the comic know that it was supposed to be the f-bomb instead, but either way it's trite.

Perhaps the greatest tragedy in The Walking Dead will be the discovery in Washington D.C., if the weird genius ever gets delivered there by the lamb-chopped redheaded bruiser, will be that the first to be struck by the virus weren't the fatties, according to Zombieland, but instead were the comics. 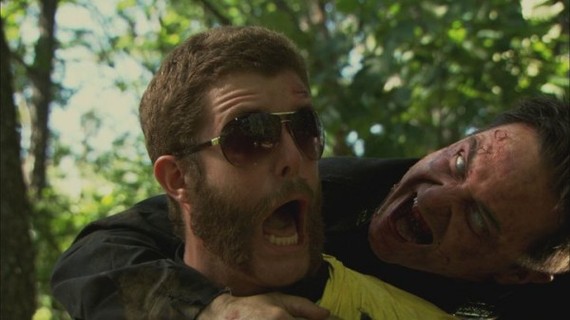 Ben Webster's lamb-chopped McDinkle is a bad guy with some great one-liners in "Deadheads."

For a more realistic look at zombies, funnier lambchoped humans and the more likely banter that might occur in a chance-meeting of the two, check out (partiality alert!) Deadheads on Netflix by Drew and Brett Pierce, two former high school students of mine who found the lighter side to death, love and everything in-between.

Related article: Read my June 2013 post The Power of a Well-Placed Smart-Ass with Mad Men, Downton Abbey and Game of Thrones.

The Wire Justified Breaking Bad The Walking Dead Watership Down