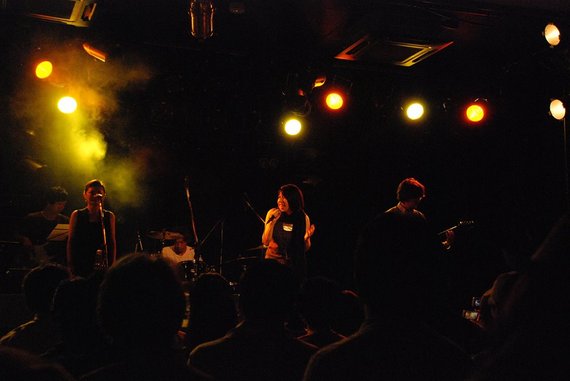 Yukiko Ito has bilateral microtia, a congenital condition which means that her ears aren't fully formed. As a teenager she became the first person in Japan to be fitted with a bone-anchored hearing aid (BAHA), and has since worked to raise awareness around both the device and microtia itself.

Microtia affects approximately 1 in 7,000 children worldwide. It can be unilateral or bilateral; the former affects one ear only, the other affects both. While people with microtia aren't usually entirely deaf, their hearing is typically significantly impeded.

Embarrassed about her microtia as a child, Yukiko first really felt her difference when she wanted to be able to tie her hair up to play football.

"When I was 13 or 14 years old, I wanted to make a hairstyle, freely. But I couldn't do that because I had a headband hearing aid," she remembers. "I always hid my ears."

"But I like to play football, or basketball. I wanted a short cut, or to do my hair up. I think sometimes I ignored people too, because I couldn't hear."

"I know many classmates were very curious about the headband," she continues. "But I didn't know how to explain my condition. It was a very difficult time for me."

Yukiko hated wearing the band so much, her mother eventually started researching alternatives. She learnt about BAHAs, which conduct sound directly to the wearer's inner ear, online.

"When I used the old hearing aid, I really hated it. I always shouted at my mother, 'I don't want to use this!' So she started to look for another hearing aid on the internet," Yukiko recounts, laughing. "She found information about this device and told me about it. I decided yes immediately, of course."

Though BAHA aids are common in a number of countries, little was known about them in Japan. Yukiko was the first in the country to have one fitted, in her left ear.

"Even professionals for hearing aids didn't know about this device," she explains. "I asked my doctor, and my doctor went to Sweden to get the ability to do the surgery. Then he came back to Japan and did the surgery for me."

While the new aid made a huge difference to Yukiko's hearing, the surgery came with a hefty price tag, and wasn't covered by public (state) insurance. At around US $15,000 per ear, funding the treatment privately is out of reach for most in Japan.

Yukiko felt conflicted about being able to have the life-changing surgery while many others with microtia weren't able to afford it.

"At that time, I felt embarrassed that only I could have the benefit," she confides. "I think the main reason people didn't know about it is the number of people with this condition is really small in Japan. The ordinary hearing aid is over the ears - 90% of all the hearing problems take that device - but my kind of hearing problem is different."

Encouraged to raise awareness on behalf of others with microtia, Yukiko overcame her shyness about having the condition and started collecting signatures while at university, petitioning for public insurance to cover the cost of having the device fitted.

She built a website with information about BAHA devices, and soon started receiving emails from families eager to know more.

"I have many friends in Japan with the same condition. They are really wonderful people," she says. "I wanted to inform other people that there is this device. I don't want to force everyone to take the device, my hope is just that they will have the choice."

Having the aid fitted completely changed how Yukiko herself experiences the world. Overwhelmed in particular by being able to hear music clearly for the first time, she was inspired to take singing lessons.

"I always really liked to listen to music, but after I changed the hearing aid the world changed, including music. This is my motivator to play."

Together with some friends who also have microtia, Yukiko formed a band and they put on a live show to express what being able to experience music meant to them.

"Most people I met with microtia played music, and were in a band. I was really interested in only microtia members playing music in front of their parents. It must be really encouraging."

After three years of campaigning, in 2011 Yukiko and her friends succeeded in securing a law change in Japan that means people with bilateral microtia can now have the cost of having a BAHA aid fitted - in one ear - covered by public insurance.

However, Yukiko is not satisfied.

"They allowed this only for people who have a hearing problem on both sides," she explains. "If you have just one-side hearing problem, the government don't fund it."

"I have many friends who want to get this device, but they can't because they just have the one-side problem."

Now 33, Yukiko finished a BA in Social Welfare at 23, then worked in IT in Tokyo for seven years, saving money to live her dream and do further study abroad. She is currently completing an MA in International Development: Social Policy and Social Development at the University of Manchester in the UK.

A key focus of her study is the impact of globalisation on Japanese social welfare policy for disability.

"Japan is really changing now, to be more like the US. Many services are changing to the private sector. So we should pay much money, according to the number of services. But it's not that fair. I want to warn of this situation in my dissertation."

Yukiko is determined to keep campaigning for greater awareness about hearing issues and disability in Japan - and a recent experience has her thinking about doing so beyond the country's borders too.

"I went to Uganda for university fieldwork, and we went to the facility of the disabled students," she tells. "I was really shocked that no one had a hearing aid. They learn sign language, because they can't have a hearing aid. It's so expensive that they can't."

"I started changing, to think for not only Japan - I don't know what I can do now, but in the future."

Through having microtia, Yukiko has made a lot of friends with the same condition. She wants them to be able to "walk around society, and the community" without hiding their ears or feeling ashamed.

"I find it hard to show my condition now, but I thought this is just my fault. I don't have confidence to show my ears, but my friends tell me that this is not an individual problem. It must be a social problem."

Though still self-conscious about her own ears, Yukiko ultimately considers her microtia a positive experience.

"I remember, when I was a high school student, I thought my hearing problem is a really good experience. Because I can understand other people's problems."

"This is my turning point. I can accept my problem. I can thank my mother and father. Thanks to microtia I can have many, many good experiences. I can see many people, I can take a live event. It's really many, many things for me."

Here's an interview Yukiko did with a news programme in Japan, including footage of the live performance.

Read the original article, including the lyrics to the song Yukiko wrote about hearing music properly for the first time at Impolitikal.com.