Unless you're a homesteader, a Sunbelt resident who eats only food from your local farmers market, or an extremely devout carnivore, you've almost certainly eaten lettuce from Yuma, Arizona, a city of 93,000 at the nexus of Arizona, California and Mexico. The Yuma area, including the Imperial Valley across the California border, produces about 90 percent of all the leafy vegetables grown in the United States from November to March, when it's too cold to grow produce in most of the rest of the country.

If you're familiar with the geography of the American Southwest, you're probably scratching your head right now. Because Yuma is in the middle of the desert. It's probably most famous today as the sandy setting of the 2007 Western "3:10 To Yuma." So you may think Yuma looks something like this: 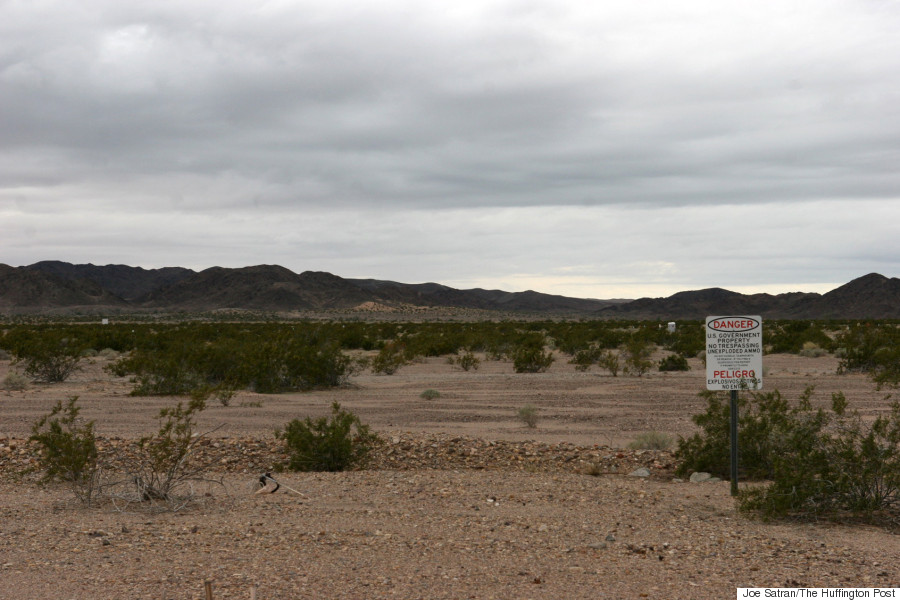 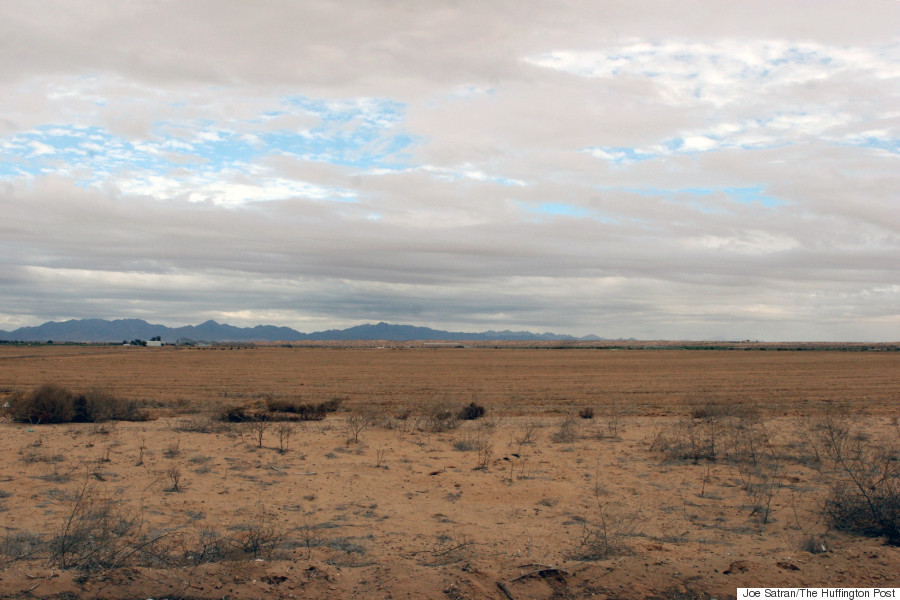 And you'd be partially right. Both of those photos were taken on the outskirts of Yuma -- the first in the middle of Yuma Proving Grounds, a military testing site, and the second on the eastern edge of the Yuma Mesa. However, Yuma also is on the eastern bank of the Colorado River -- a rich source of water and fertile soil for thousands of years. Over the past couple of years, the city has established a vast park along the riverfront, illustrating its heritage as a kind of oasis in the desert. Here's a view of the park from near the center of Yuma: 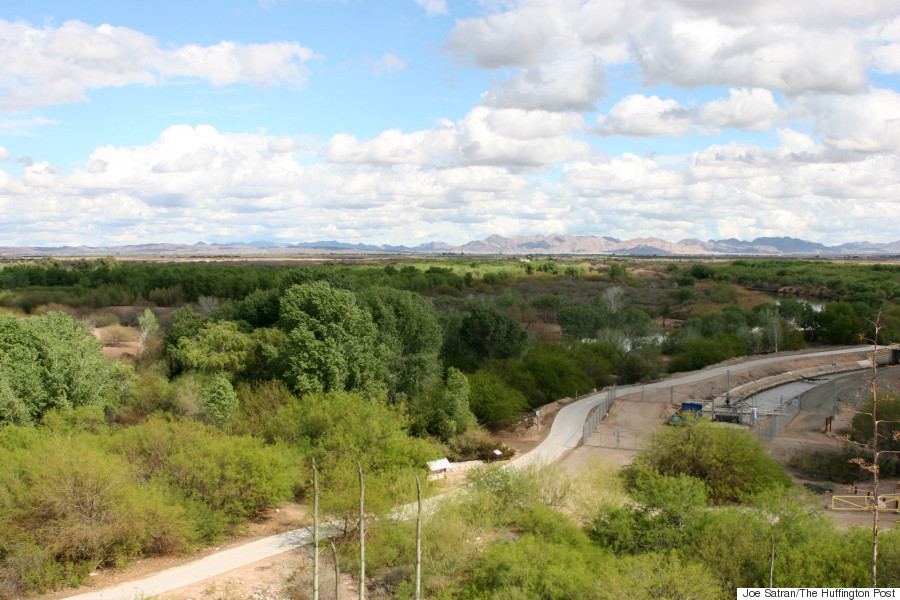 The river -- along with almost constant sunshine, warm weather and ready access to a deep pool of skilled farm workers from across the border in Mexico -- has allowed Yuma to become one of the most productive agricultural regions in the country. Yuma farmers grow a host of crops: wheat, oranges, lemons, dates, alfalfa. But the crown jewel is lettuce. 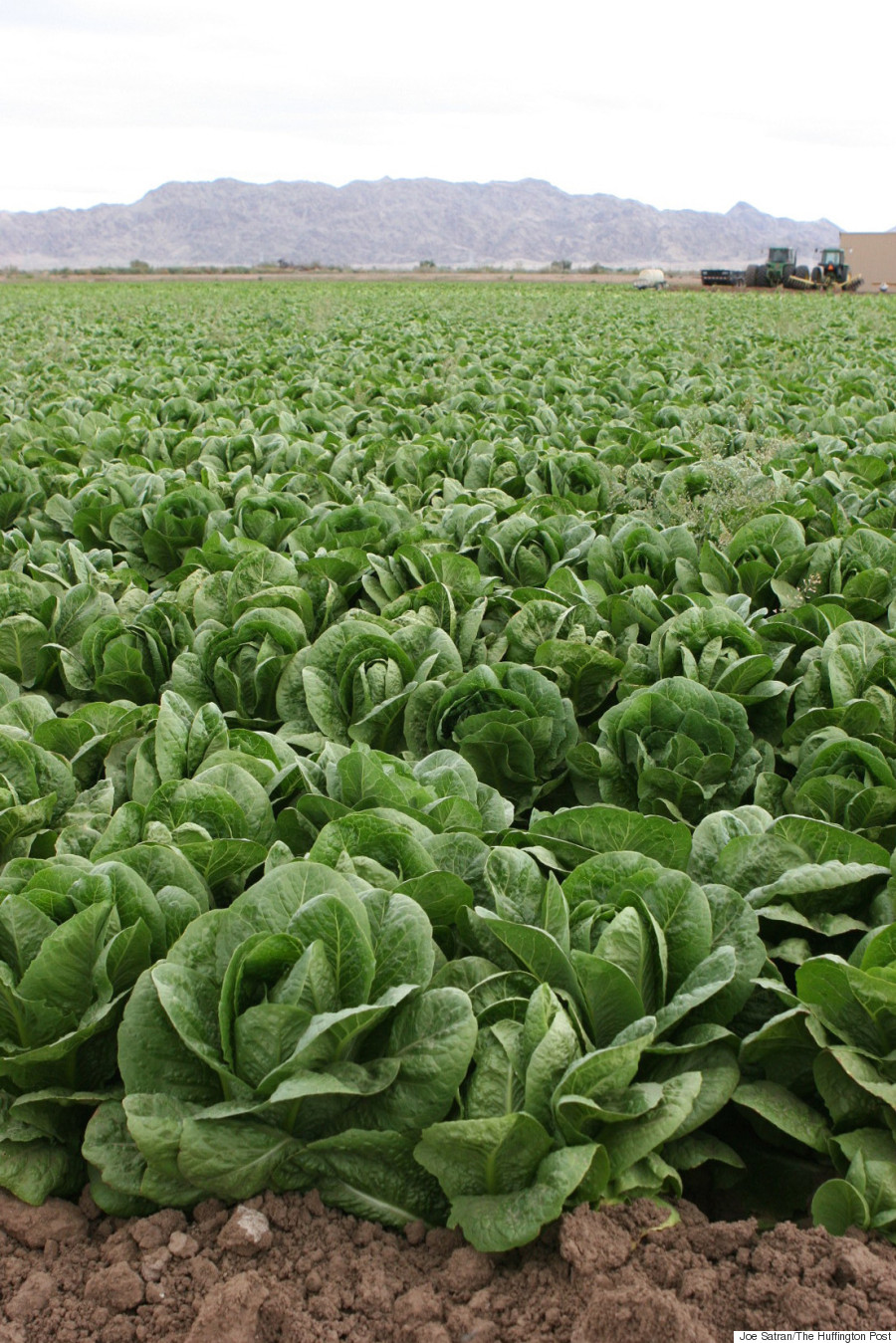 Driving through the city in the winter, you pass countless fields of emerald green heads of lettuce. 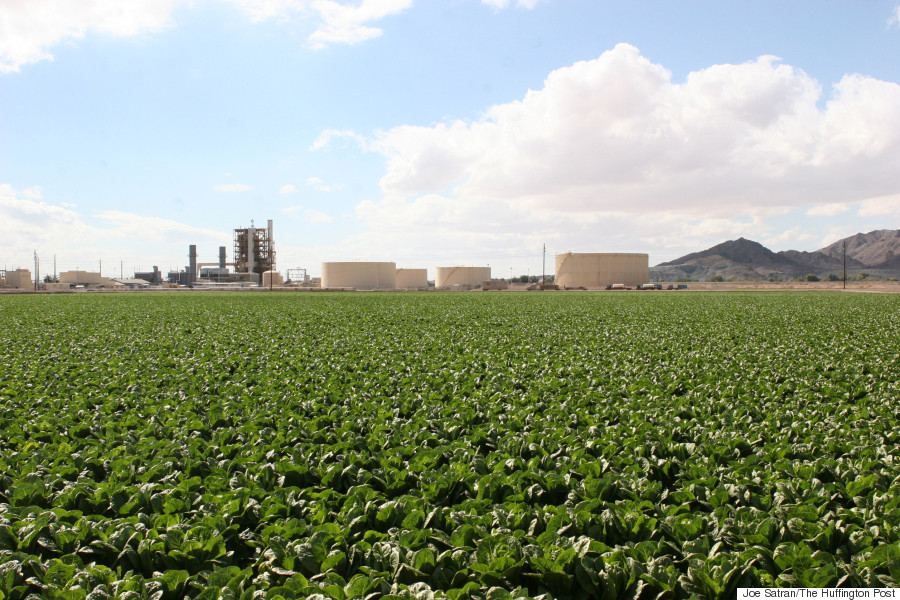 You even see the occasional field of red or white lettuce, destined, possibly, for a bag of spring mix. 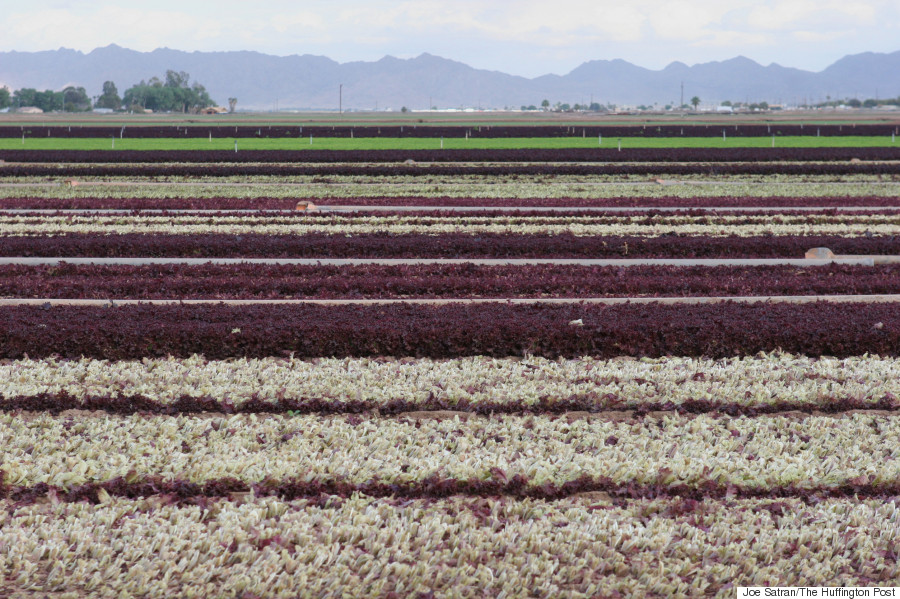 If you've ever visited a lettuce farm in, say, the Hudson Valley of New York, it can be a little unsettling to see a huge field of lettuce in Yuma with palm trees and mountains in the background. 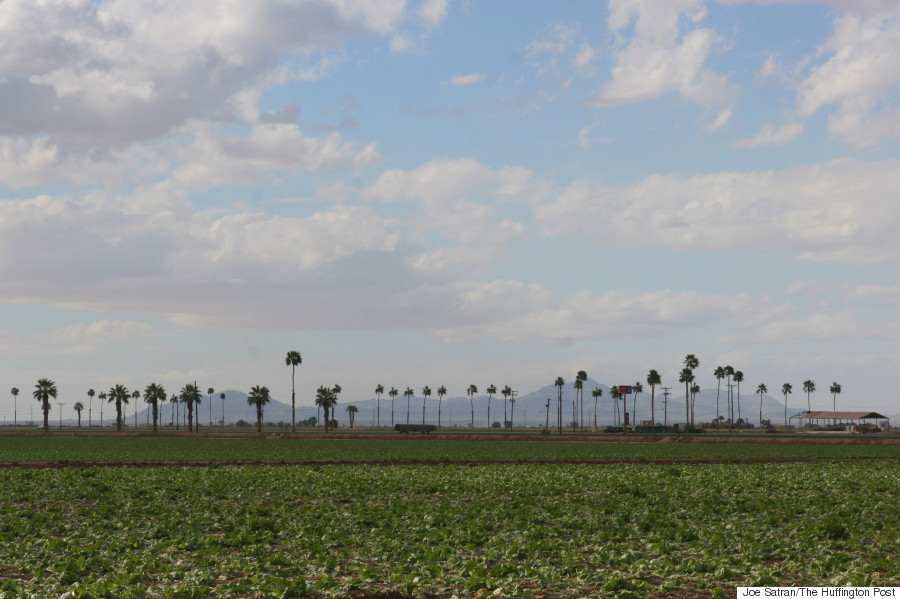 These fields stretch for miles to the east of Yuma, up the often-dry Gila River. 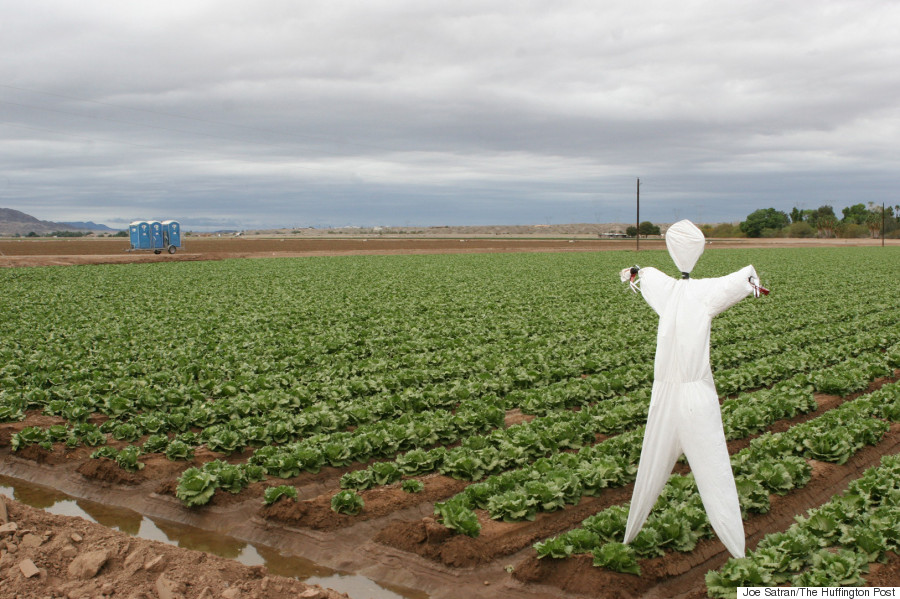 Of course, it takes more than scarecrows to tend to this bountiful crop. Six days a week, about 45,000 farm laborers -- many of them legal guest workers who commute across the border into Yuma every day -- harvest, trim and pack lettuce in crews ranging from two to 30 people. 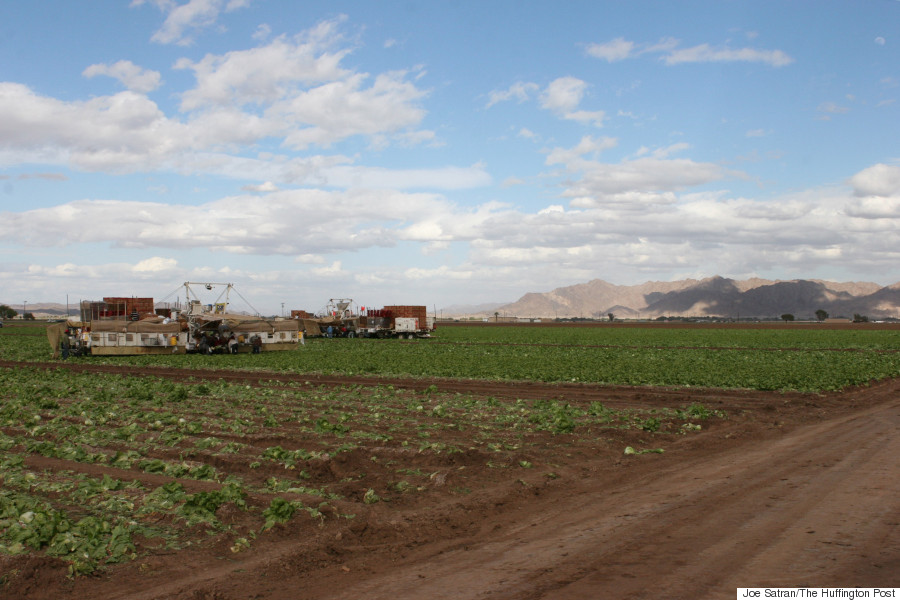 Here, a crew picks heads of iceberg lettuce on a field contracted to Dole, one of the biggest lettuce shippers in the region. 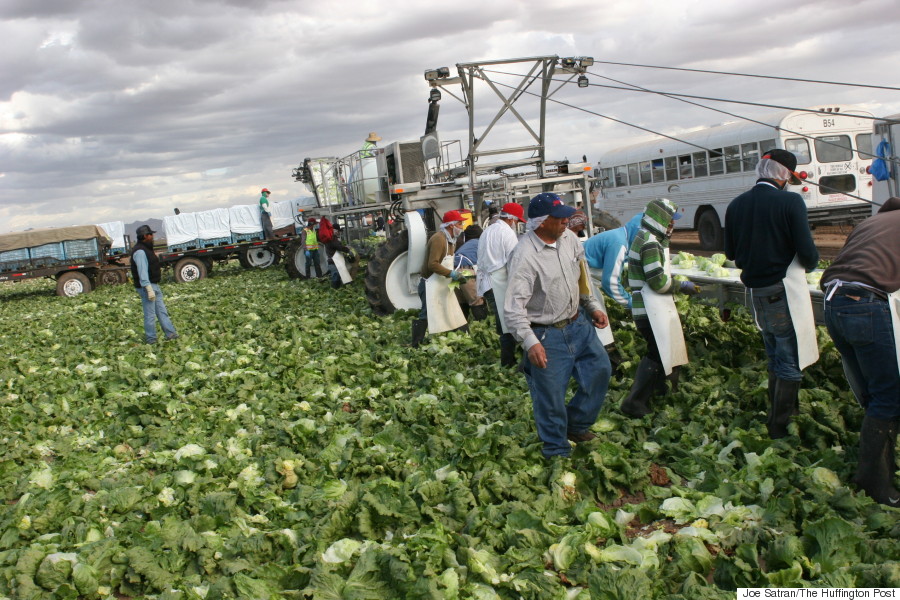 (This might be a good time to note that, although Yuma holds the Guinness World Record for the sunniest place on earth, with sunshine an average of 91 percent of the time it could possibly shine, it happened to be cloudy on two of the three days when I visited.)

The laborers work through the fields, accompanied by workstations attached to trailers. Sometimes, as in the following picture, they'll work in teams of two, with one person (usually male) picking the heads of lettuce and then passing them to another person (often female), who trims them. 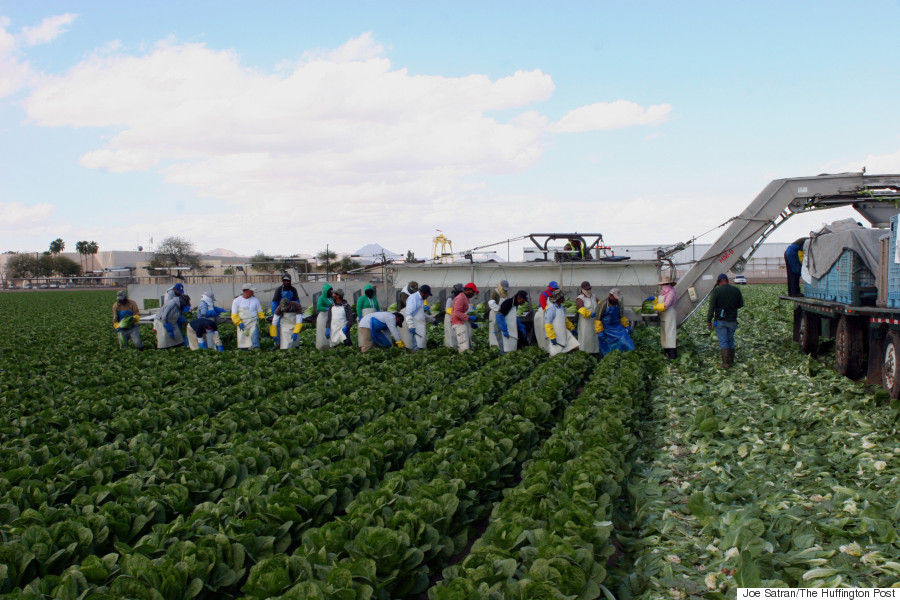 Here, four women cut heads of romaine down to usable size, wash them in chlorinated water and put them on a conveyor belt that loads them onto a truck. 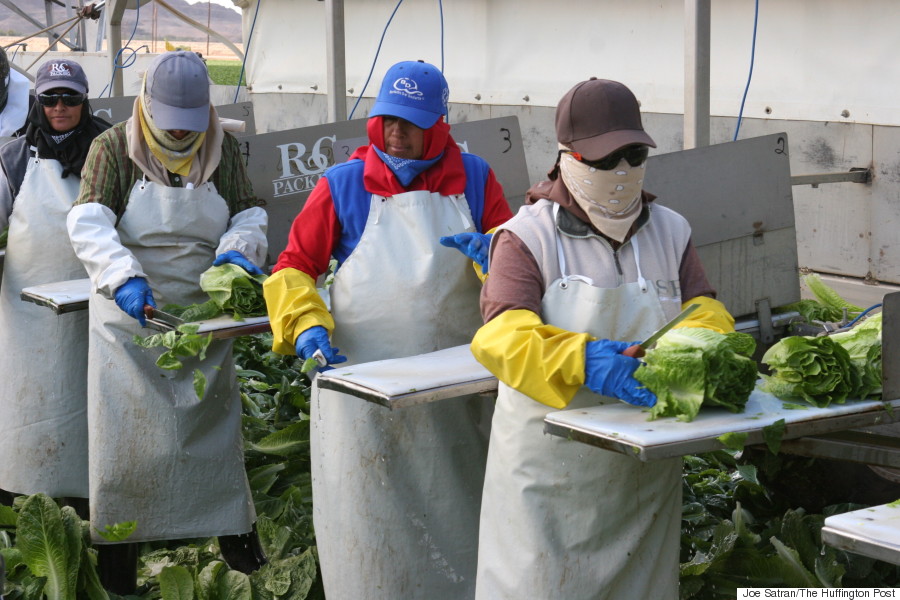 Huge trucks stand at the ready to take lettuce away. At the height of the vegetable season, one grower told me, 1,000 trucks, each carrying about 1,000 boxes of produce destined for grocery stores and restaurants from Seattle to Miami, leave Yuma every night. 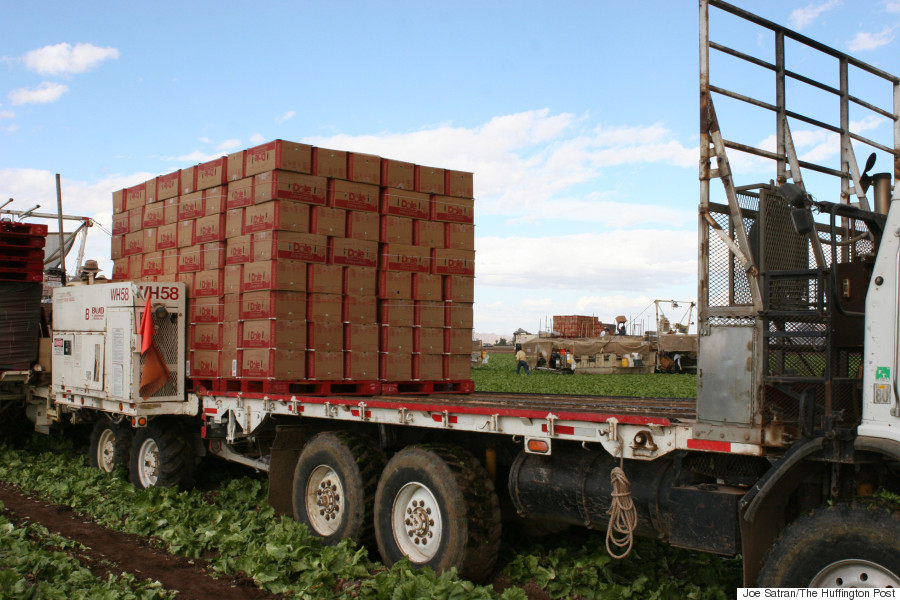 Yuma only gets an average of three inches of rain a year -- and lettuce requires a lot more water than that to grow. So Yuma's farmers get almost all their water from the Colorado River, seen here 10 miles north of Yuma, with the picturesque Castle Dome in the distance. 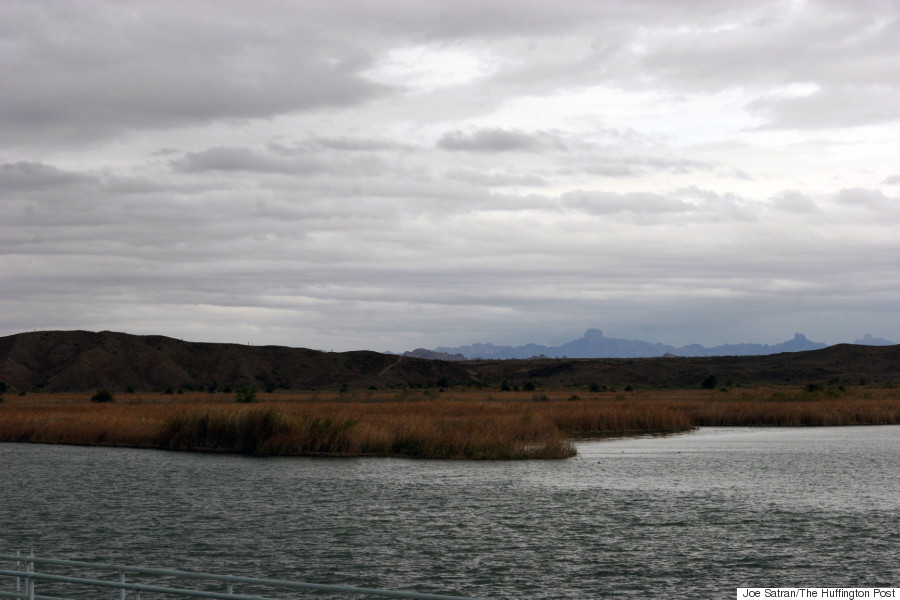 In the lower left corner of this photo, a few metal bars mark the beginning of the Imperial Dam, the last of the great dams on the river, which was completed in 1938. At this point, water from the Colorado is sent in three directions. Some goes east to the Gila Valley, and some continues in the Colorado River down to Mexico. But the bulk is diverted into the All-American Canal, which supplies water to Yuma and the Imperial Valley. The bars in the picture are part of a structure that filters logs, trash and other large refuse out of water destined for the All-American Canal. 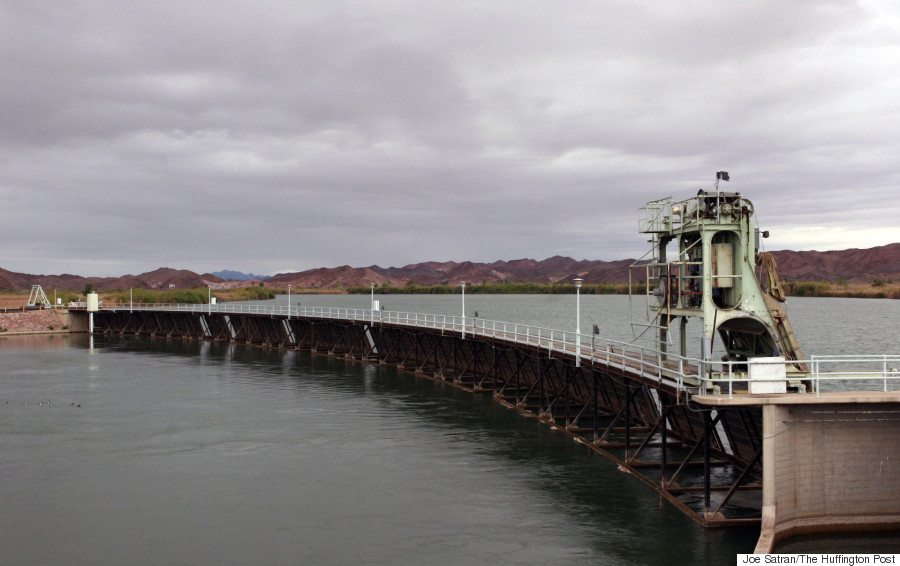 The water then passes through the main portion of the dam into a basin that removes silt, and then onward to the canal. 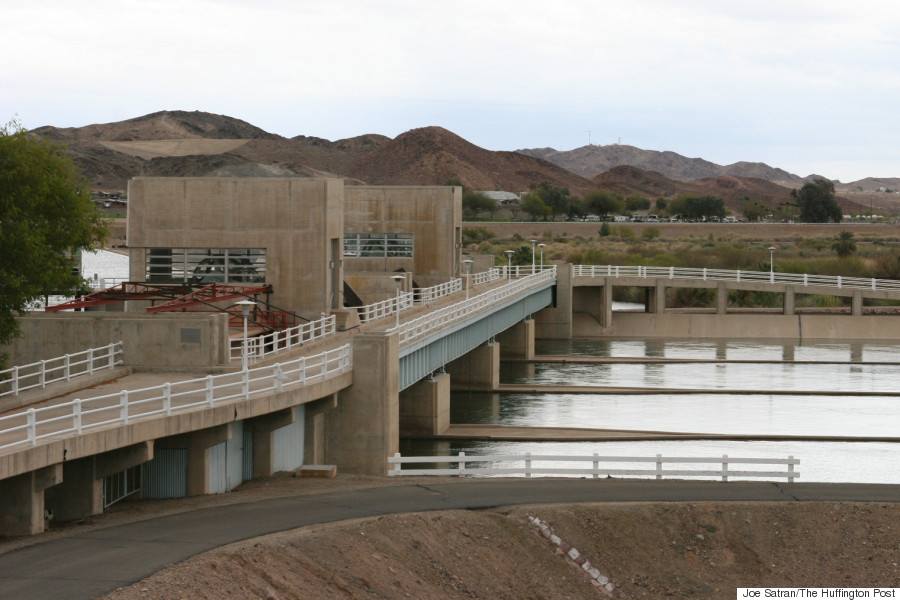 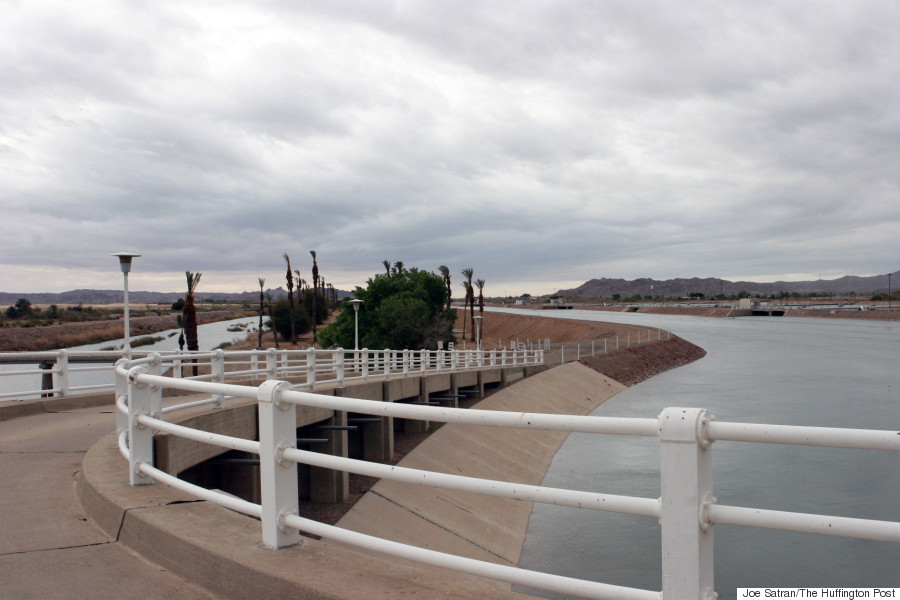 Water from the All-American Canal is distributed to individual farms in Yuma through a vascular system of ever-smaller irrigation canals, which cut through the entire Yuma region. 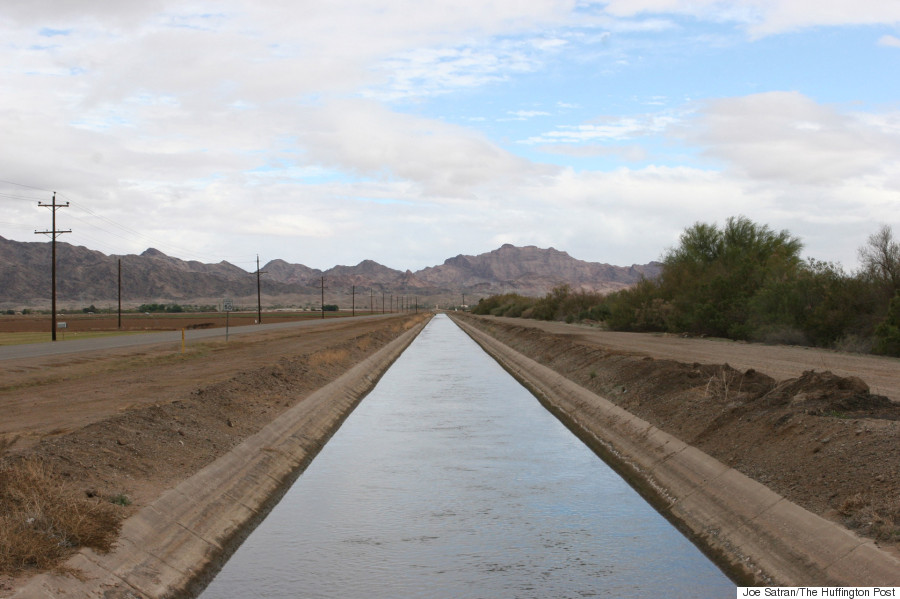 Farmers submit orders for water to their local irrigation district. When it arrives, about three days later, they open gates of the small canals adjacent to their fields and allow water to run through the furrows between rows of lettuce, saturating the soil in the beds. 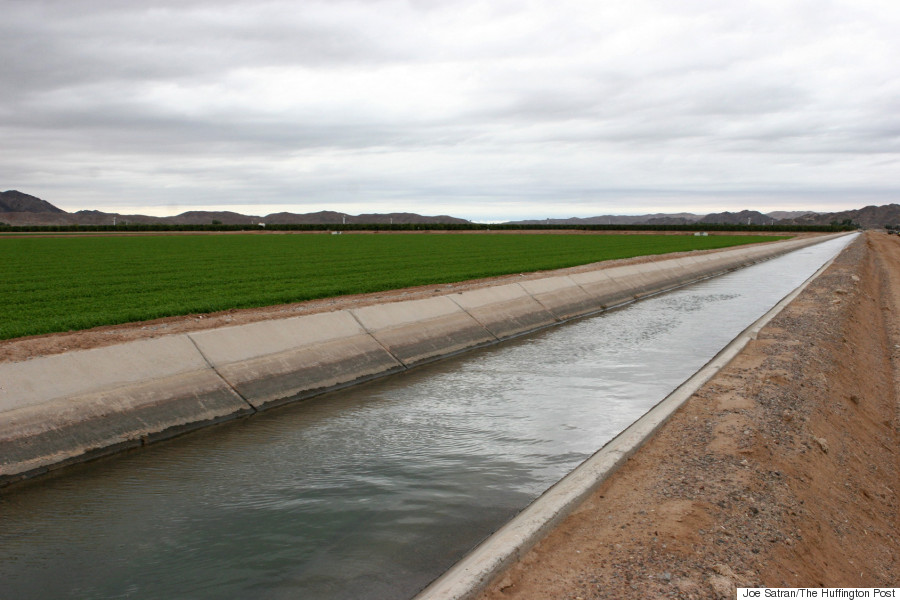 The farmers also sometimes hook pipes and electric pumps to the outlet of the canals to propel water into the air through sprinklers. Sprinklers are used to irrigate fields of seeds that are just starting to germinate, as well as those with beds too wide for furrow irrigation. 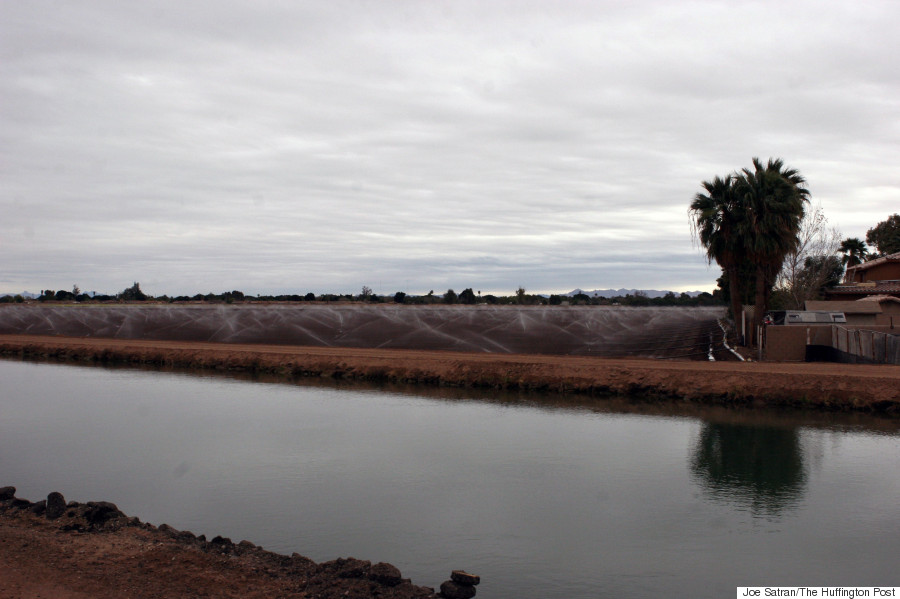 A few miles west of Yuma, as the All-American Canal heads toward the Imperial Valley, it passes through the stunningly beautiful Algodones Dunes -- which stood in for the desert planet of Tatooine in "Return of the Jedi." 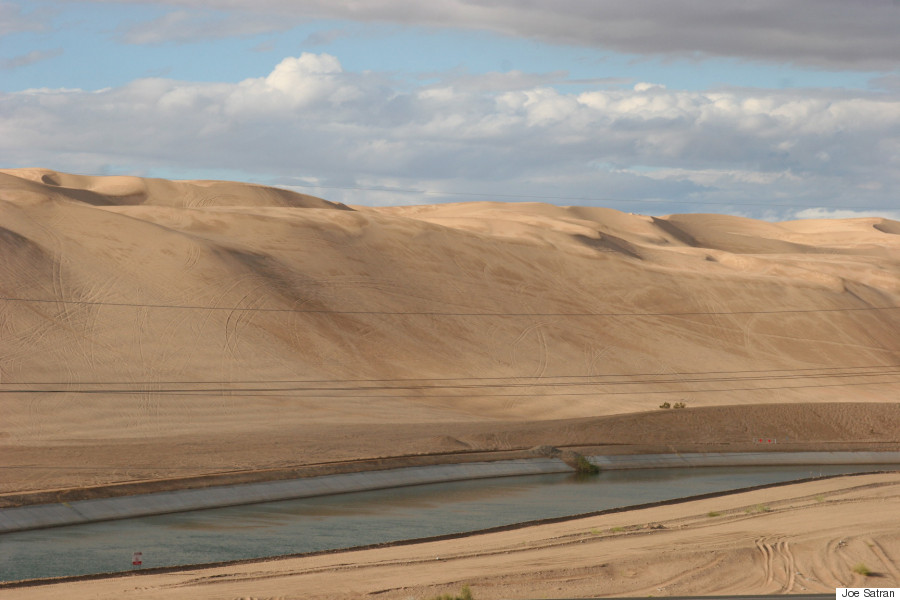 Make no mistake: Were it not for irrigation canals like these, Yuma's farms wouldn't be nearly as productive as they are. This photo, taken in Dome Valley, east of downtown Yuma, shows the contrast between the high desert around Yuma and the fertile farms within it. 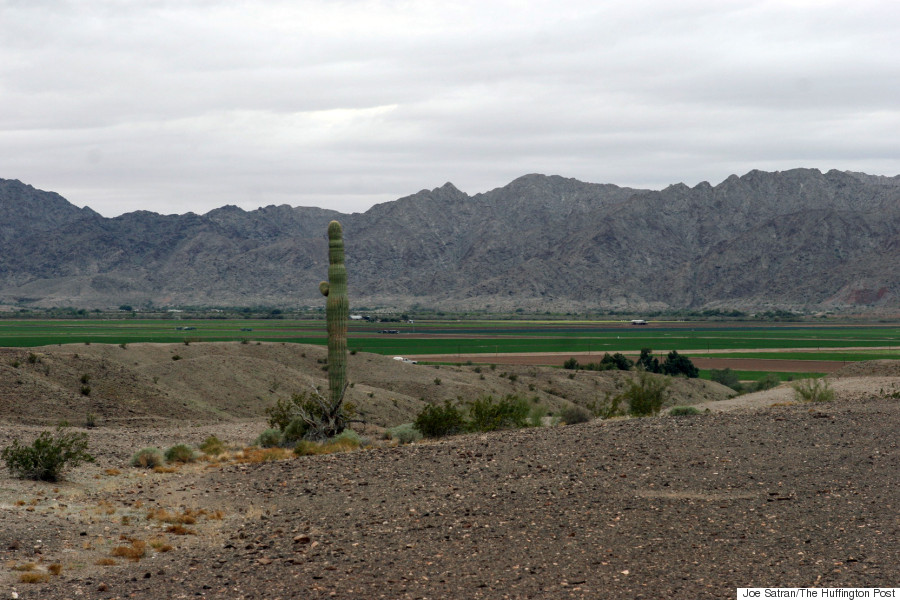 Last weekend, the city of Yuma commemorated the crown jewel of its agricultural ecosystem with its 16th annual vegetable-themed festival, Lettuce Days. 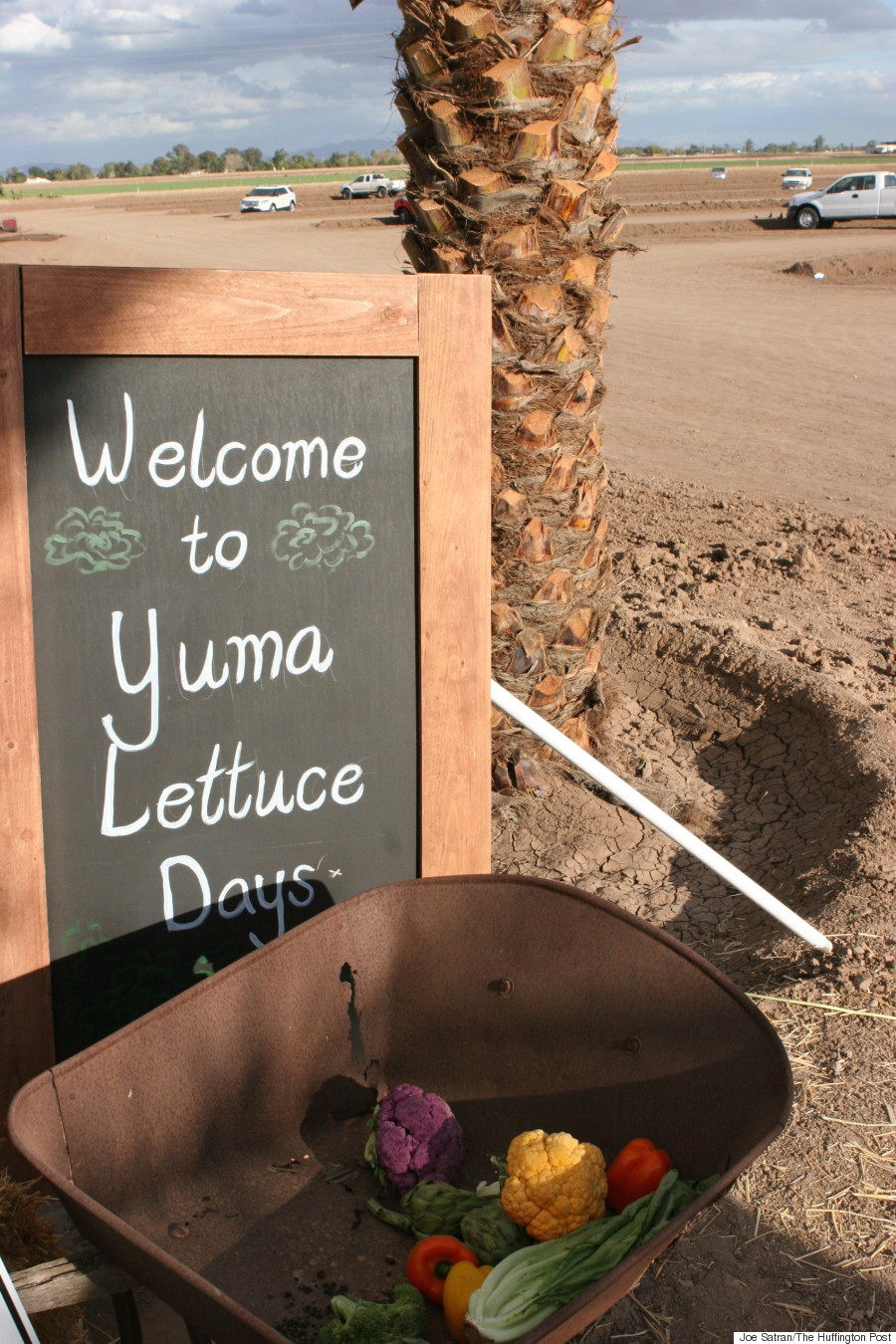 Thousands of people came to the University of Arizona's Yuma Agricultural Center, this year's venue, to attend panels on lettuce, taste delicious salads, listen to music and peruse souvenir stands. 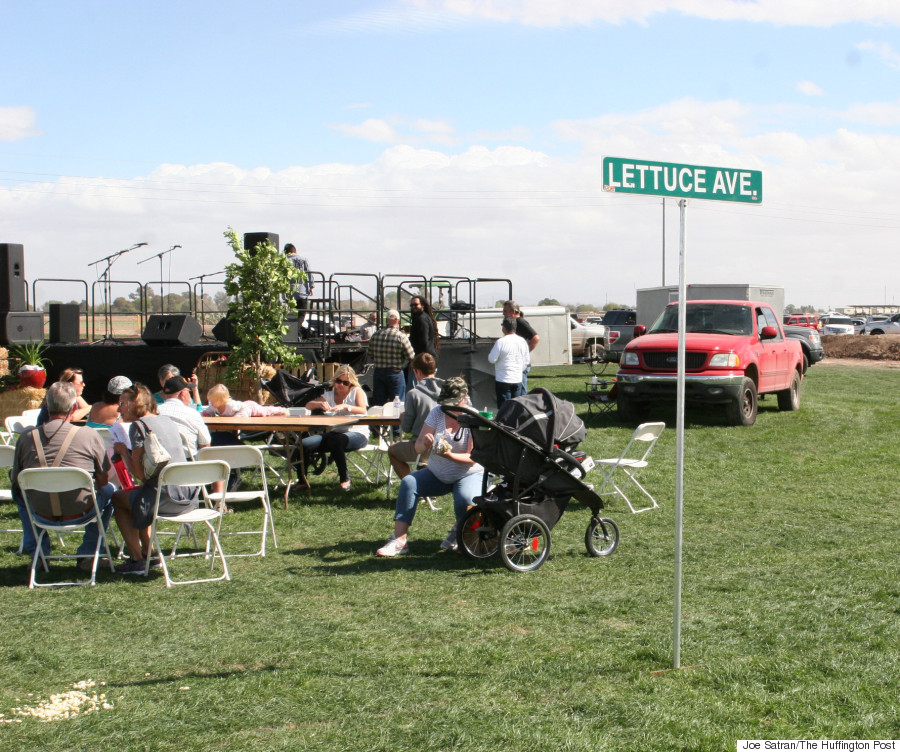 The biggest booth was run by Dole, but a few smaller farmers also were selling their wares. 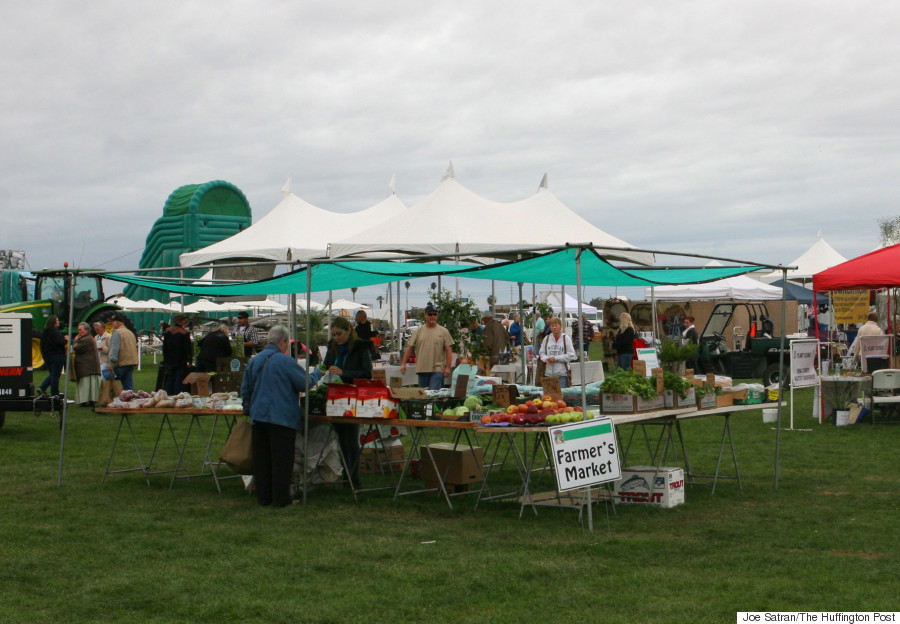 The next Lettuce Days isn't for a year. But there are still a few weeks left in Yuma's lettuce season, before the bulk of the production shifts to the cooler Salinas Valley in central California. So if you'd like to taste Yuma's bounty, all you have to do is visit your local grocery store and buy some lettuce.

Boston
Flickr: photofarmer
Boston (a.k.a. Bibb) lettuce is delicate lettuce with pale green, soft cup-shaped leaves. The flavor is mild and sweet. Sometimes in the supermarket you will find hydroponically grown Boston lettuce, which has the benefit of having no dirt or sand in the leaves. Photo from photofarmer, Flickr.
Arugula
Getty Images
Arugula (a.k.a. rocket) is very popular in Mediterranean cuisine. The leaves have a large central lobe with smaller spiky side lobes. Arugula does not grow in a head but on stems. It has a peppery, slightly bitter taste. Try arugula on its own or mixed into salads.
Radicchio
Flickr: cyclonebill
Radicchio is Italian in origin. The lettuce is characterized by dark red leaves with bright white stems on a tightly packed head. The taste is bitter. Radicchio comes in two main varieties, the small cabbage-like Chioggia and oblong Treviso. Radicchio is great in mixed salads and also works well grilled. Photo from cyclonebill, Flickr.
Watercress
Getty Images
Watercress is an aquatically grown lettuce that has long hollow stems with round lobed leaves. It has a peppery taste. Enjoy it on its own, in mixed salads, or wilted into Asian soups and stir-frys.
Romaine
Jupiterimages
Romaine (a.k.a. Cos) is exceptionally crisp and slightly bitter. It has long, narrow leaves with thick ribs. The most flavorful part is toward the center of the head -- this is why you will often see bags of Romaine hearts, packaged with the outer leaves removed. It's most well known in Caesar salad.
Red Leaf And Green Leaf
Flickr: photofarmer
Leaf lettuce comes in both green and red leaves. They have loose open heads with ruffly tops and crisp stems. The flavor is sweet and mild. Photo from photofarmer, Flickr.
Oak Leaf
Flickr: asha susan
Oak leaf lettuce comes in both red and green varieties. It grows as individual lobed leaves with soft and ruffly leaves. The taste is sweet and mild, comparable to Boston lettuce. Photo from asha susan, Flickr.
Frisee
Flickr: Claude Fabry
Frisee (a.k.a. curly endive) is characterized by long and slender feathery leaves on a loose head. The taste is slightly bitter. It's commonly used in mixed salads. Photo from Claude Fabry, Flickr.
Endive
Jupiterimages
Endive (a.k.a. Belgian endive) is characterized by an elongated pointy head with very pale green tips (or dark red tips) and white stems. The taste is bitter. It is commonly used in mixed salads. Individual leaves can be used as scoops for appetizers. It can also be cooked or grilled.
Mache
Flickr: Calgary Reviews
Mache (a.k.a. corn salad or lamb's lettuce) grows in a rosette shape with lobed leaves. It is tender with a mild flavor. Photo from Calgary Reviews, Flickr.
Mizuna
Flickr: timsackton
Mizuna (a.k.a. Japanese mustard greens) has long lobed pointy leaves that look somewhat similar to arugula. The taste is peppery but not as strong as arugula. It is most commonly used in mixed salads. Photo from timsackton, Flickr.
Escarole
Jupiterimages
Escarole has broad, curly leaves. Its flavor is slightly bitter. Young leaves are great for salads, but more mature leaves are typically used for wilting into soups or stews
Iceberg
Jupiterimages
Iceberg is one of the most well known lettuces. It has crisp, pale green leaves that are almost white as you work your way to the center. Iceberg has little flavor and almost no nutritional value. A popular way to serve it is sliced into a wedge and covered with blue cheese dressing.
WATCH: Tyler Florence On Using Lettuce In Your Cooking
Tyler Florence dispels the mysteries of lettuce and its varieties.