Try to meditate on a Yumi Sakugawa comic and not smile while doing so. It's not easy. The comic artist crafts Facebook savvy, one-eyed monsters, clumsy cats (in human clothes) and possibly, but not certainly, morbid scenarios with the perfect dose of bittersweetness. With creatures that look as though they were picked fresh out of the imagination, Sakugawa transplants the banal problems of the social media age onto fantastical creatures who too are just trying to get by.

The SoCal based artist is most well-known for her book "I Think I am In Friend Love With You," which chronicles a bashful cyclops with a good old fashioned friend crush. Yet each of her projects establishes within it an entire world that, even if executed in cartoonish drawings and a dash of text, comes across precisely. Sakaguwa's comics, while being hilarious, are imbued with a quiet magic that somehow makes a glowing computer screen as ripe with beauty and mystery as a night sky full of twinkling stars. We reached out to the artist to learn more. 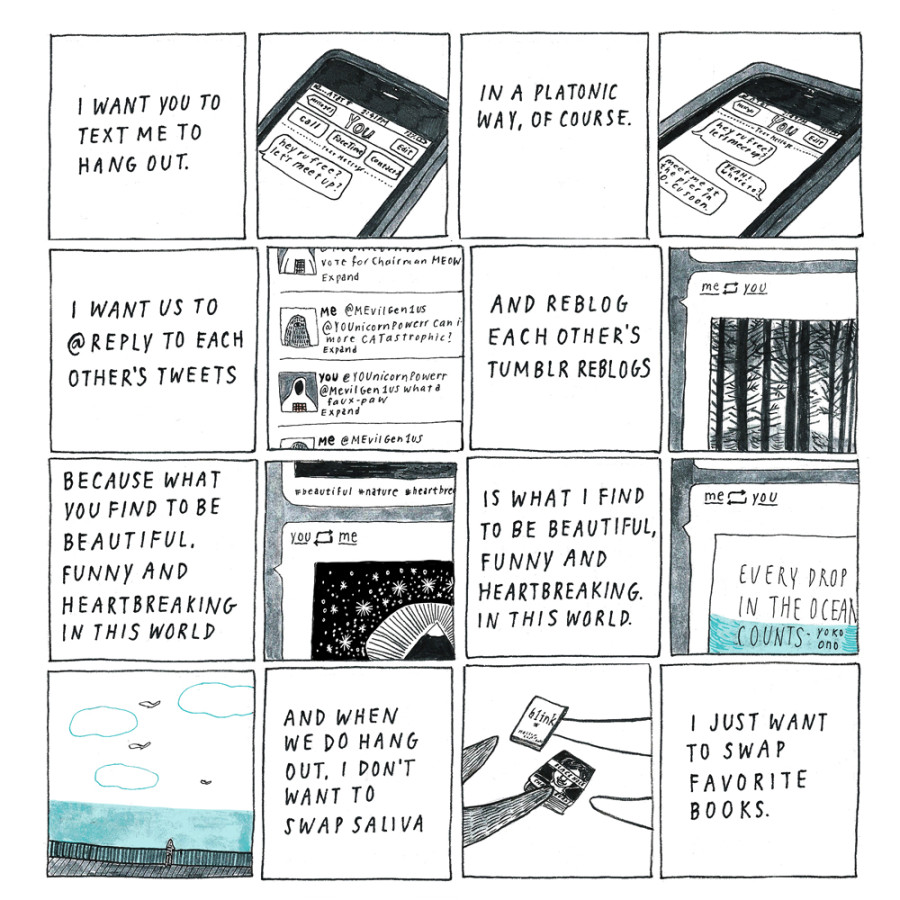 Your work makes technology feel so intimate, which is a different tone than the one we usually see in regards to technology. Do you think technology gets a worse rap than it deserves as far as bringing people together or apart?

Yeah, I think technology is whatever you make of it. It can definitely hinder or help human relationships but I think from my personal experience -- even though there is that distance -- messaging or Facebook wall posting or commenting, in my case, I feel these online social media tools have enhanced my social media relationships [and] have helped me make new friends or keep in touch with people. For me social media plays an important role in my life, and I did want to capture that it's not mutually exclusive from your real life interactions.

You also deal so much with outer space and the internet, and at a certain point they almost become interchangeable. Do you see the web and intergalactic space as connected in some way?

Yeah, I think they are, however subconsciously. In some ways being able to connect with other people on the internet is like accessing a new dimension or a new world that is not yours. The internet and outer space, I think, are closely related themes when I make my stories. 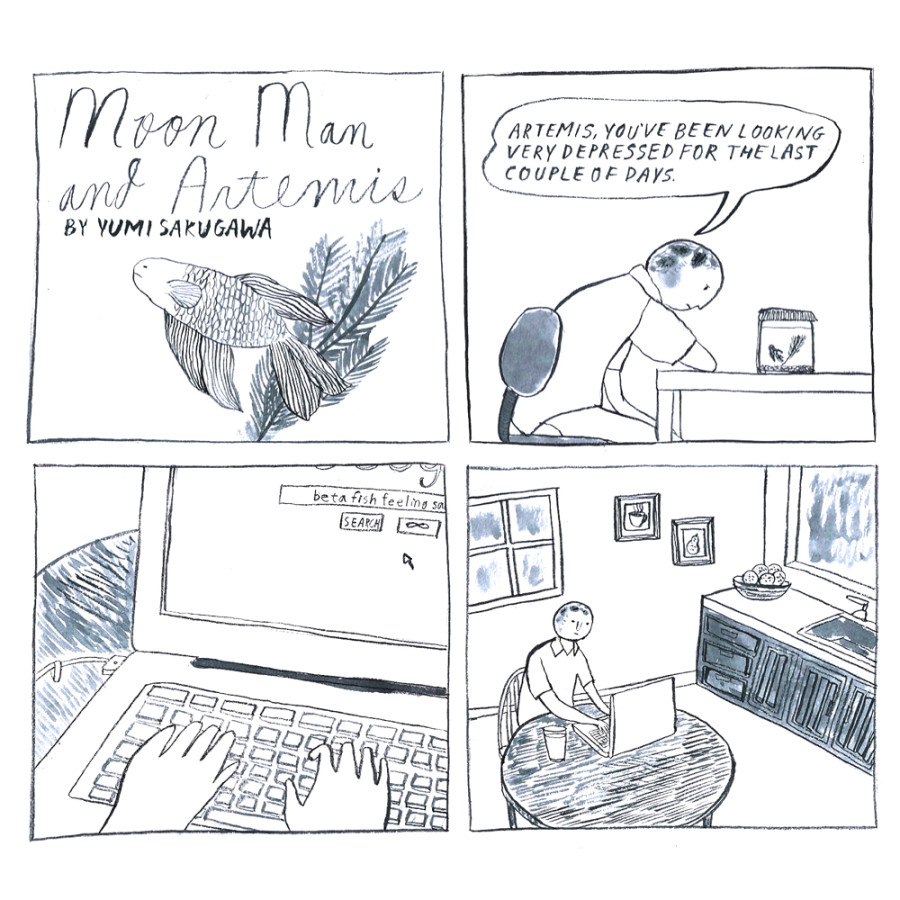 The monstrous protagonist of "I Think I am In Friend Love With You" is so simple and so devastatingly adorable. Can you walk us through you came up with this character's appearance and what influenced its creation?

I definitely have drawn several prototypes of this one-eyed-monster character for quite some time now. If you look through my old sketchbook drawings and Live Journal drawings from years ago I was always drawing these weird sort of globby monsters that don't really have distinguishing characteristics except for, maybe, one really big eye. I think one influence was -- this is a very specific anime reference -- I used to watch "Neon Genesis Evangelion" when I was a teenager and they do have very fantastical creatures. Also I think when I am using non-human characters I like the challenge of creating characters where their mode of outward expression is very limited. They may not have a mouth, or they may not have two eyes, and yet they still very physically have strong emotions or are hiding emotions. I think that comes from my own childhood shyness, and hiding my emotions, maybe not being so forthright when expressing my emotions to the rest of the world.

In your mind do these characters have a gender, race or specific personality? How much do you personally identify with these monsters?

When dealing with non-human characters, I very specifically did not want to define a gender or ethnic background or even an age for that matter. I did want the focus to be more on what the character was going through rather than be about identifiers. There's no name, no gender, no race and no age. 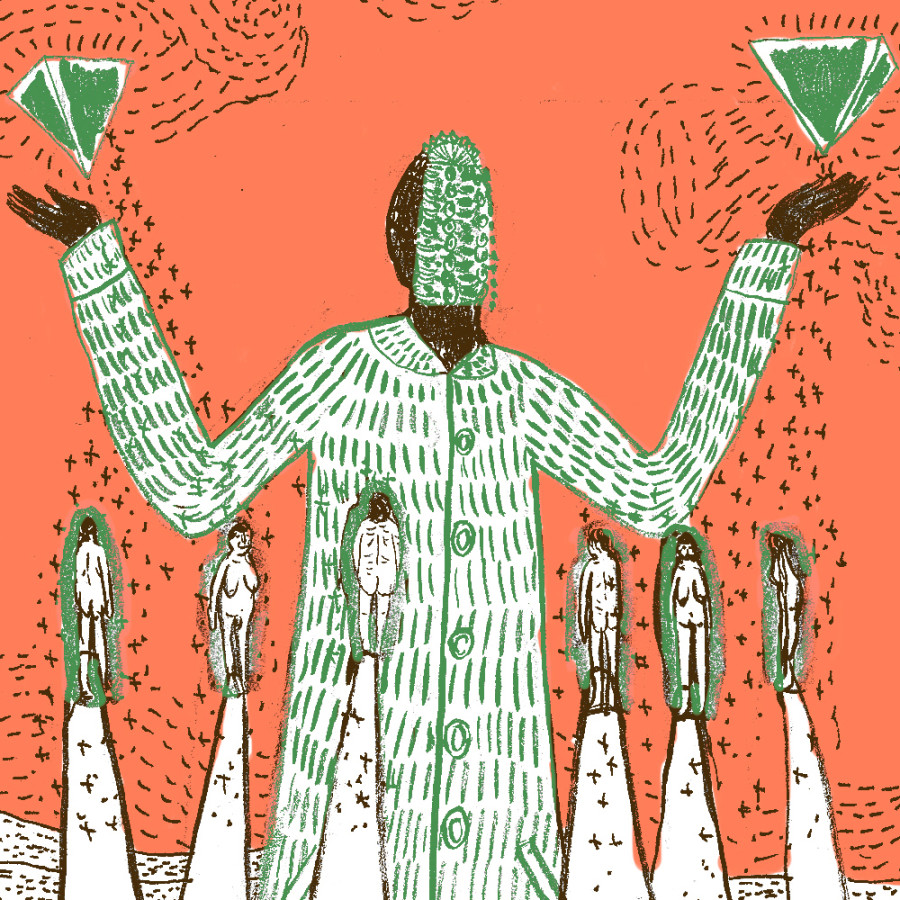 What is your brainstorming process like? Do you carry around a notebook? Do you devote a certain time to sitting and brainstorming?

I don't have a specific set ritual but one thing I do is regularly meditate. I feel like that is a very important part of the process in clearing my head and sharpening my own creative intuition. As far as making comics it usually depends on the story. Sometimes the image comes first and the words come after I brainstorm or come across certain images but about 75% of the time I like to write out the narrative before I even begin drawing any pictures. I did want to be a fiction author for a long time as a kid so I think this comes from that. The ideas seem to come out of nowhere. It could be anything from a certain memory I was revisiting or a snippet from a movie or a book I read -- it could be anything in my life that inspires me to make my next story.

How, if at all, do you think California influenced your artistic style? 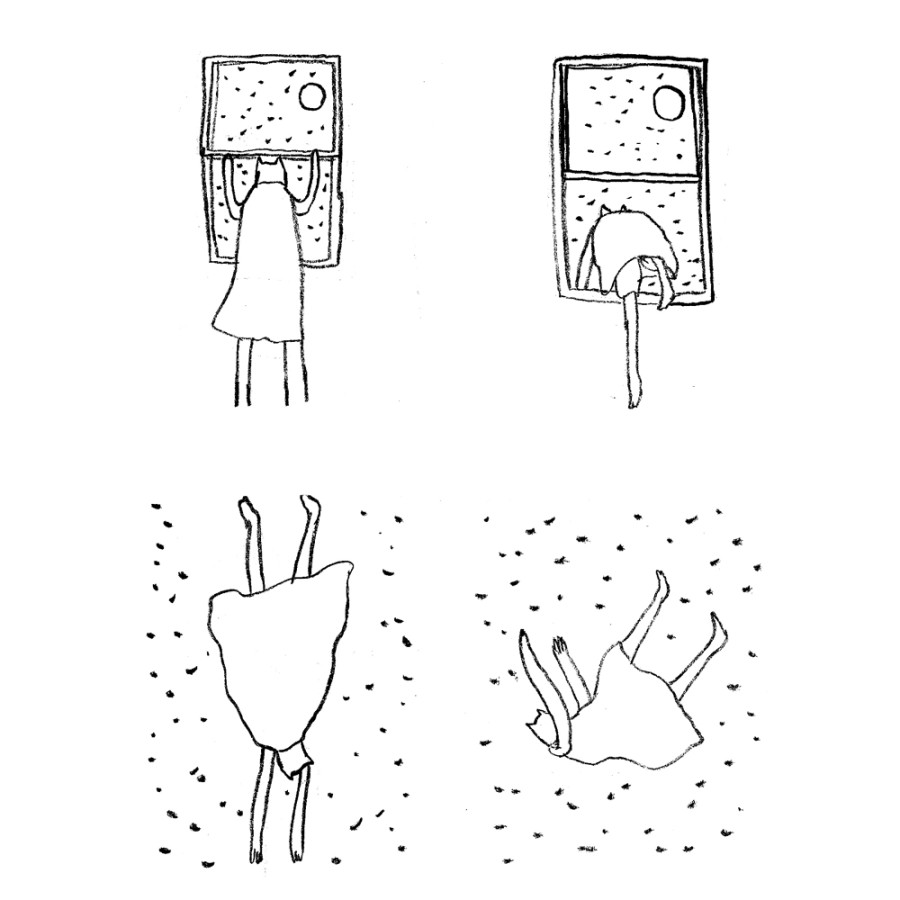 We spend a lot of time exploring issues of inequality in the fine art realm. How diverse, in your experience, is the world of comics?

In the very particular scene that I'm most active in, which is self-published zines and independent comics, I feel like the events I've been to have had both men and women of different ages and different ethnic backgrounds. I never felt like I was the lone woman or the lone Asian-American. That being said, I've mostly been in big cities, like Los Angeles, San Francisco, Brooklyn, Toronto -- those are all very diverse cities. I am aware of the fact that in the bigger scheme of things in the art and literary worlds there are still a lot of gaps as far as diversity and representation goes. That is part of my personal inspiration to make art and tell stories and have more representation for women and people of color.

I am working on a short comic anthology which hopefully will be my next published book. I am going on a book tour in early February for "I Think I am In Friend Love With You." I am also tabling at comic and zine conventions in different cities throughout the year. 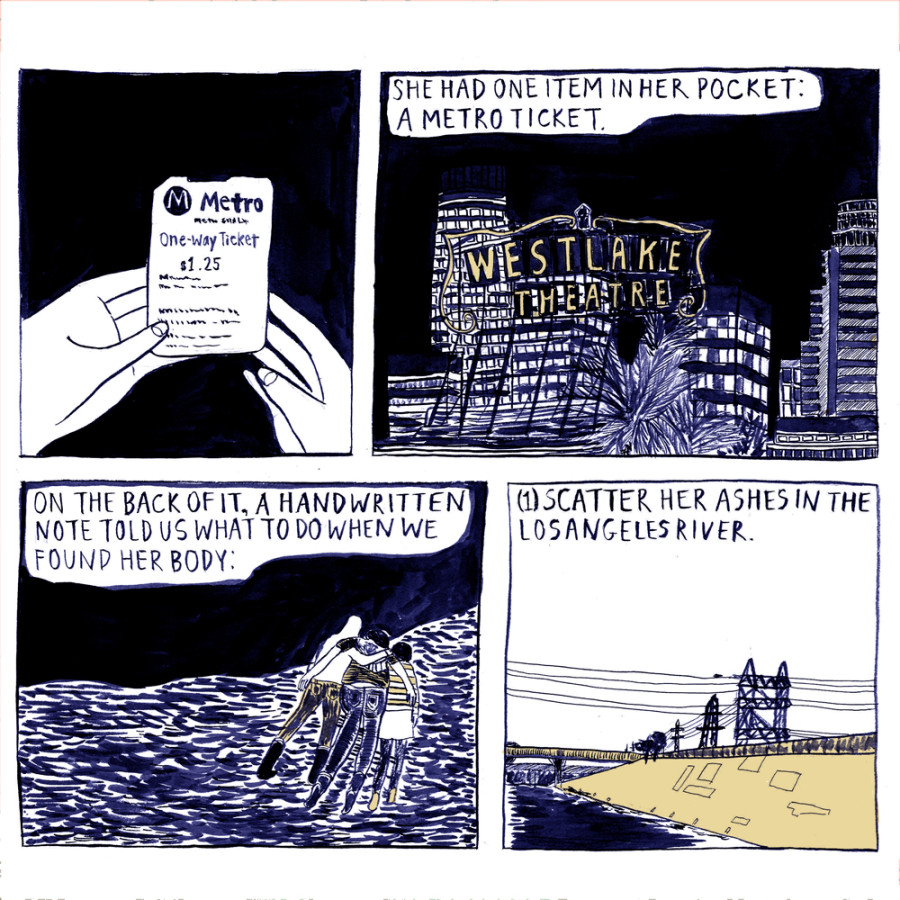 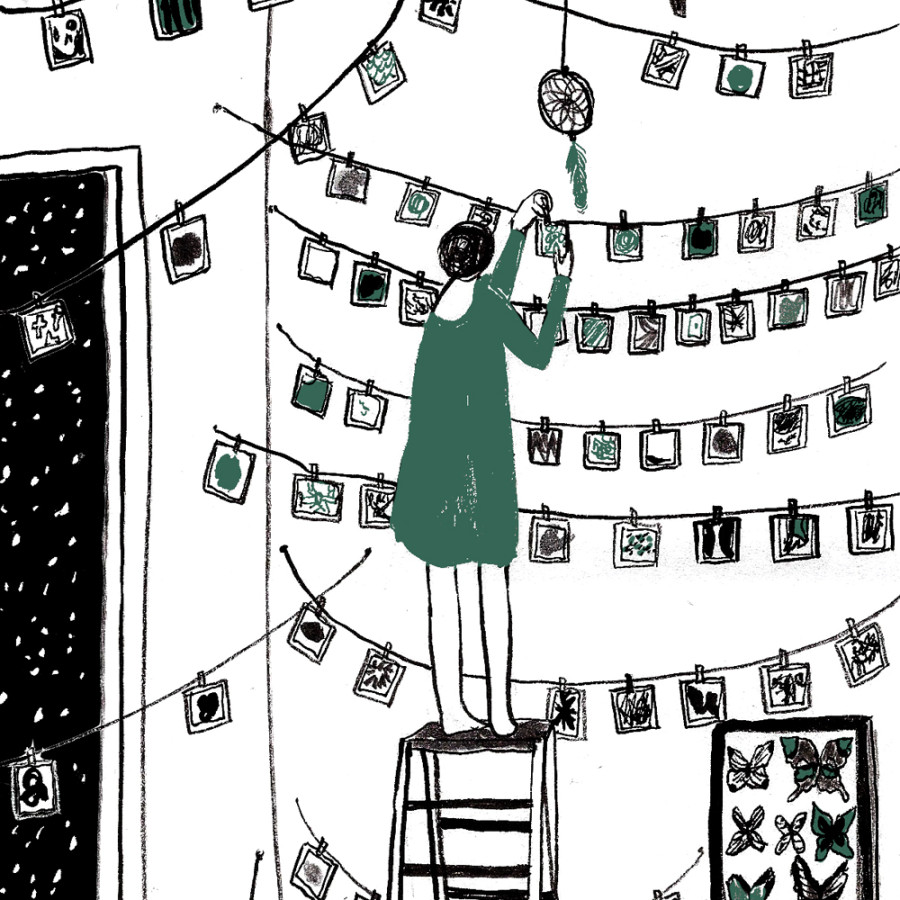 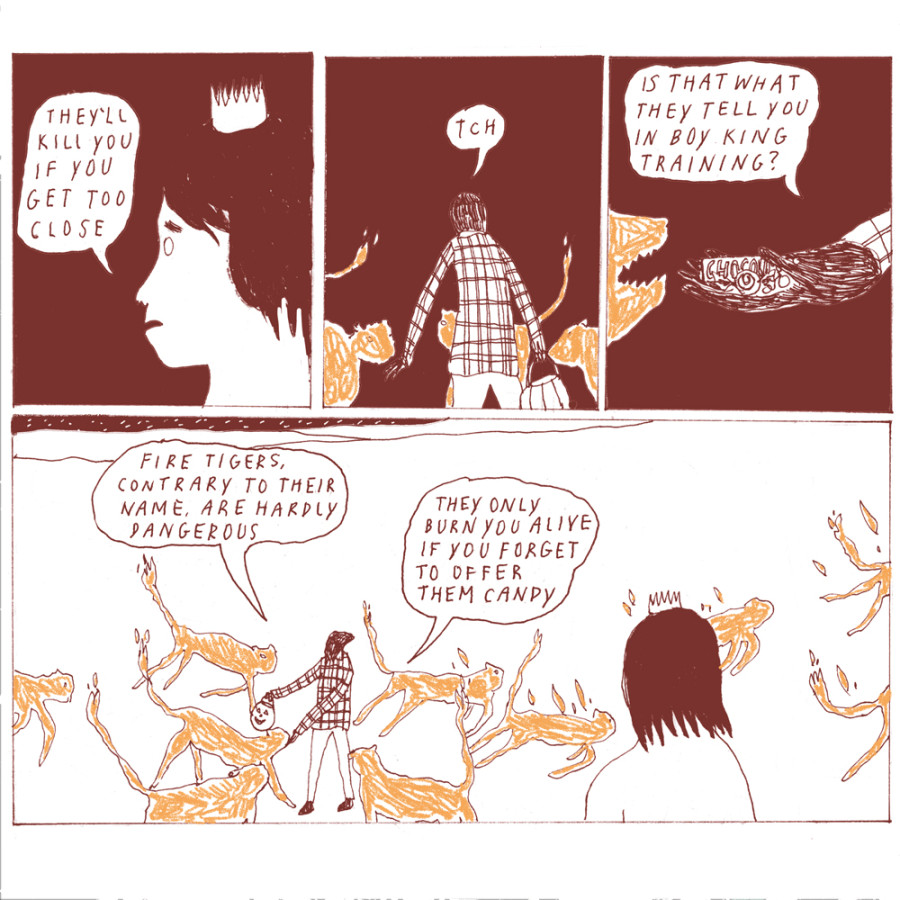 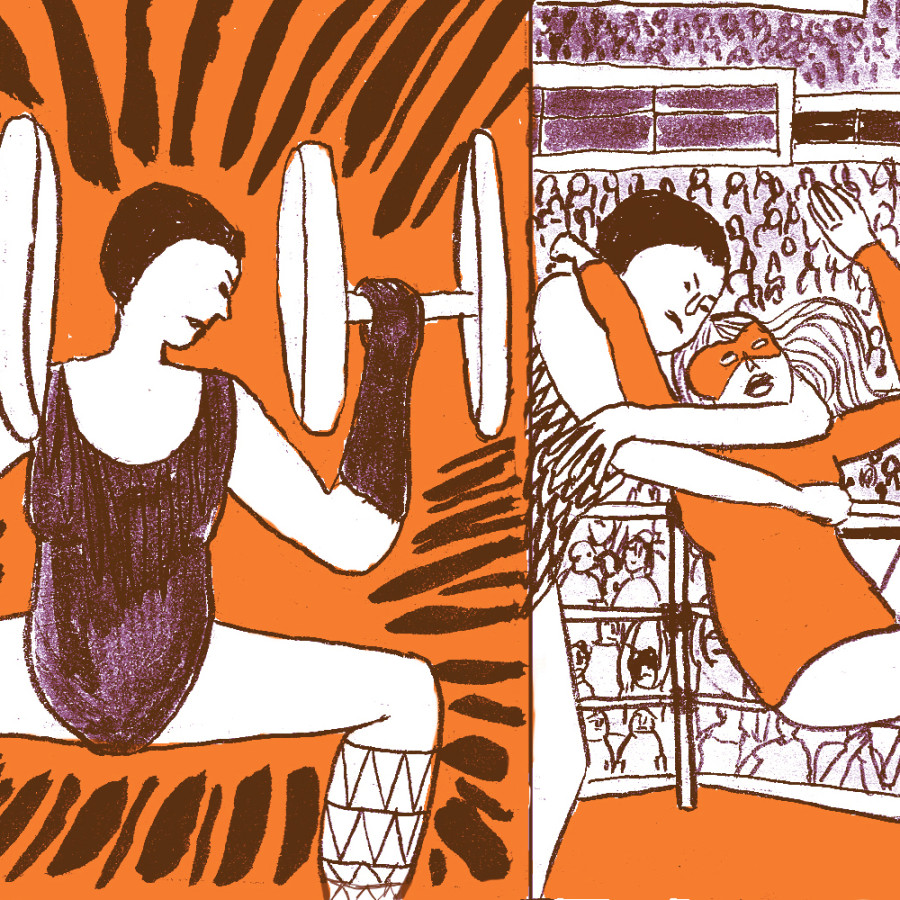 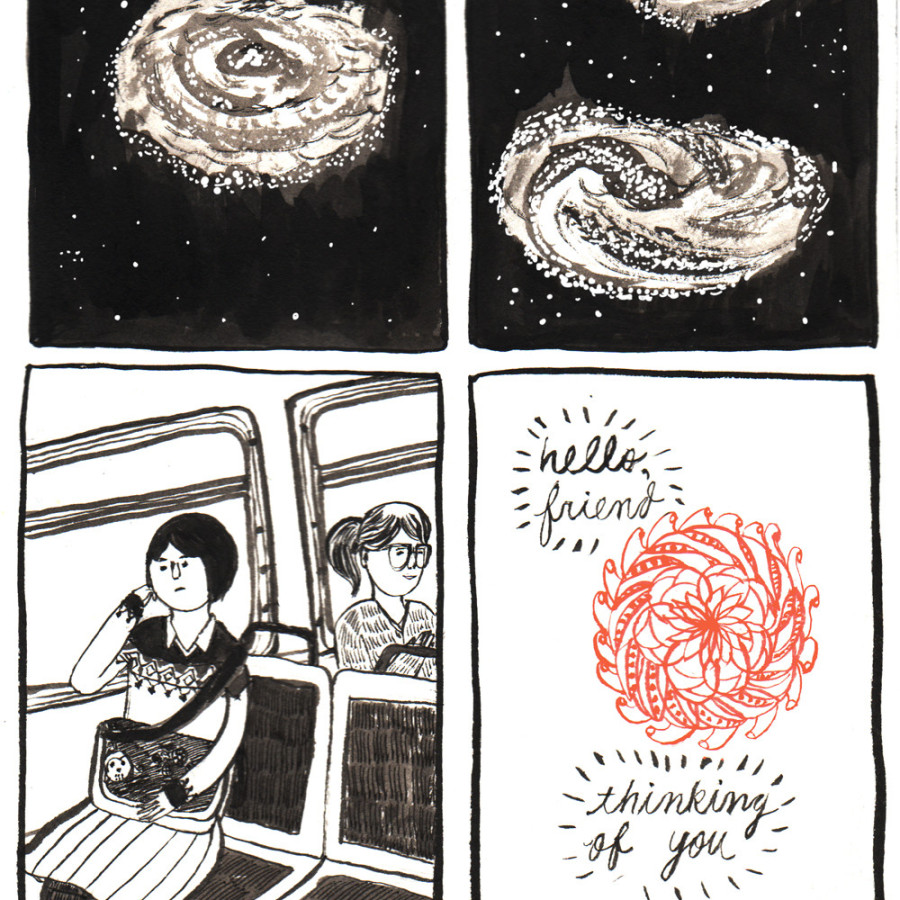