"Yung Jake was born on the Internet in 2011," reads the press release for the young artist and rapper's show at Steve Turner Gallery in Los Angeles.

The exhibition, titled "Drawings," takes place in an unlit room, brightened only by what appear to be a series of blank canvases emitting an alien light. Upon closer glance, the canvases morph into digital drawings, each containing a lone computer cursor in motion. Some cursors zoom from right to left and back again, resembling a 21st century brushstroke that never quite finds its place. Others loop around furiously like a fly that's been trapped. It's unsettling to see a screen with all that blankness; normally such vessels are flooded with windows, tabs and popups of all kinds. Rarely do we get to see screen as screen. 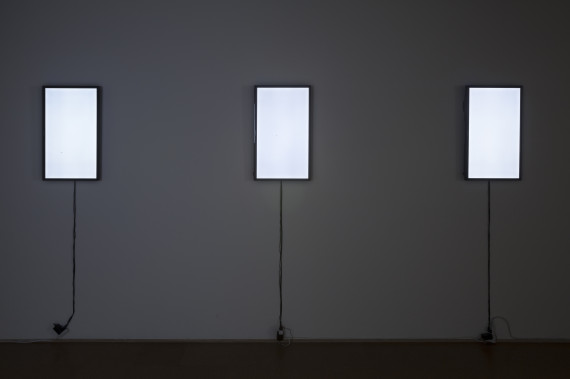 The exhibition premiered Jake's newest music video, "Look," a trippy iPhone-filmed look at a bunch of Yung Jakes riding around, chilling. "It was weird," Jake described of the whole gallery experience."I had a show up and I used the monitors that were showing my drawings to play the video." Note: Jake is known to only conduct interviews via text message. When asked if it felt almost funny having a self-serious gallery crowd collectively watching a rap video he responded: "Yeah I guess it feels like that idk."

Music videos have been Jake's medium of choice as of late, particularly those that live on the internet and bleed into it oh so fluidly. His most well-known piece, "Em-bed.de/d" is a self-actualizing ode to internet virality, encouraging viewers to blog about, post and share his video. "Internet raps/find me in my Rhyme Zone," Jake raps. "Making art/n*ggas find me on Rhizome." The visuals pop and ooze out of the frame, or the YouTube equivalent of a frame, with advertisements, pop-ups, and comments all becoming part of the interactive HTML 5 experience.

Real online reactions to the video were weaved into later iterations of it, creating one of the most meta mosh pits to ever hit the web.

In an earlier video, titled "Datamosh," Jake raps about the widespread net art trend in which images crumble into a colorful bath of pixels as his own face falls victim to the glitchy phenomenon. These insider-y videos access the place where art, hip-hop and the internet intersect. References, slang, memes, parody, and artspeak are chopped and screwed and chiseled away, creating a web-savvy playground where Kara Walker and Justin Bieber are just two names to be dropped.

Jake, who got his BFA from CalArts, turned to the rap world due to frustrations with the art world's inability to avoid talking about race. "Everytime I made a painting it was about being black all da sudden," he explained to LA Weekly. "So I started making raps about pretty-hoe-bitches and suddenly blackness wasn't an issue anymore."

With one foot in each culture, Jake possesses a certain mystery as to where his intentions and allegiances really lie. His cryptic text interviews don't help.

When asked if Yung Jake is a character, he responded "Yeah, but not like a fake character... I'm always on." At a certain point, viewers processing Jake's work have to get rid of the desire to know quite when to laugh and when to furrow the brow. There's no irony and no wink to be found, at least that we can gage. Instead, like the internet itself, Jake offers up a hot stew of keywords, loops, hyperlinks and designer brands. The young artist speaks and lives in the language of the net, telling stories as complex, multivalent, frivolous and raw as infinite material lurking in your browser. Sometimes it feels like Yung Jake wasn't born on the internet, he is the internet.

Yung Jake's "Drawings" runs until May 31, 2014 at Steve Turner Contemporary in Los Angeles. See a preview of the works below, though they really should be seen in person.