Yvonne Strahovski went from fighting crime to committing it. On Chuck Strahovski played tough-as-nails agent Sarah Walker, who was tasked with protecting Zachary Levi's Chuck but ended up falling for him. Last season on Dexer, Strahovski hopped over to the other side of the law when she inhabited the role of charismatic killer Hannah McKay.

The seventh season of Dexter (now out on DVD) was filled with plenty of twists and turns, especially when it came to the romance that blossomed between Dexter and Hannah. Before Dexter unrolls his last sheet of plastic, I caught up with Strahovski to talk about reprising her role as Hannah and all those Chuck movie rumors.

With the success of Kickstarter projects lately, like the recent one for the Veronica Mars movie, there's been the idea of a Chuck movie floating around. Obviously the fans are still very passionate about the show and Zachary Levi has already said he'd be interested in doing one. Have you heard anything about the possibility of doing a Chuck movie?
To be honest nothing more than what you're saying right now. Only the rumors and the bits and pieces on Twitter-land really.

Is it something you'd be interested in doing if they could get a Chuck movie off the ground?
Sure. We've talked about it as a cast here and there but nothing too serious. So I'm sure if it came down to it we'd probably all want to do something like that for sure.

What did you think of the series finale of Chuck? It ended up being kind of bittersweet. What did you think with where the show left Sarah?
I was concerned at one point when I got the script and realized that I was going to have to play Sarah Walker without the memory, because that changes everything really. And you sort of wonder as an actor, "What am I going to do with this? How am I going to make this work with a character who's lost her memory, but it's the memories that make the character along the way." But I think it ended up working out really nicely. It was bittersweet, but I think it did leave a more sort of hopeful ending in place, in terms of where they could go from that point forward.

Are you shocked with how passionate the fans still are about Chuck, even now?
It's heartwarming really, more than anything. I think it's really nice to have sort of that family fanbase from a show that they were so dedicated to. It kind of feels like home in a way, that show and the experiences that we all had together. I think as a cast we feel quite affiliated to the fans, because they helped us so much to stay on the air for five years.

So switching tracks over to Dexter, Hannah is such an interesting character. What were you first attracted to about her?
I mean it's always interesting to get into the mind of someone who does bad things, and you have to try and figure out or justify them to yourself as the actor playing the role. You have to figure out where the decisions came from and how one moves forward in life knowing that they've done these bad things. And part of it was also the show itself. Dexter is such a great show and so well written and performed. Being invited into that platform is something that I was definitely going to take up.

How do you view Hannah? Do you think she's just evil or do you view her more as a survivor? I think Dexter, the show in general, is very interested in the idea of evil. Where do you think Hannah falls?
I don't think she's evil, I think she's a survivor. I think she does evil things because she's trying to survive. And I think in her mind she's justified everything, though she's uncomfortable with some of the things she's done herself. But she knows she has to live with it and she's just trying to have a life, really. At the same time that's sort of made her into quite a manipulative girl. So I guess some people would say that's pure evil, but I think there's more to it. [laughs] 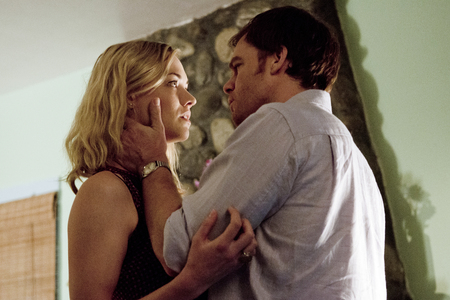 She seemed kind of off-put by the idea of Dexter's "dark passenger." There was the one episode last season where she couldn't seem to get her mind around that idea.
Right, I think she was sort of baffled by the idea that he had sort of created this other self that did the killing, and it was that dark passenger that needed to do it. I think she was more trying to point out to him that it's him and nobody else and he needed to realize that.

How do you go about humanizing a character like Hannah? Obviously on Dexter the audience sympathizes with Dexter and I felt like by the end of the season they sort of sympathized with Hannah as well. What's the challenge of portraying someone who kills people and yet you sort of make us root for her?
It's a bit of a challenge. I think you just really have to get down to the heart of it and figure out why. For Hannah, in a way it wasn't really her fault that she started on the path that she started on. Way back in the day when she was 15 and she got caught up with her older boyfriend who was killing and then she ended up committing one of the murders along the way. She sort of got thrown into it and didn't really know any better, which set her up for a life of having to continue down that path of killing people, because she was then trying to get off of that pathway.

I think she's just trying to escape it and I don't know if she's accepted that she never will escape it. She probably hasn't, that's why she keeps doing it. I think you have to find the heart behind it and get the audience on your side with your reasons why you do the things that you do.

What was your favorite episode to shoot last season?
Gosh, there are a lot of episodes that I really enjoyed. I also really liked the last episode with the prison stuff, just to see an even gnarlier side of Hannah where she had nothing really left to lose. So it was just another sort of layer to peel back from the character. That was enjoyable.

Were you surprised when it turned out that Hannah had poisoned Deb?
Well no, I mean at the time it was exciting to read that that's where they were going with the script. But as far as the character goes it's definitely something that she would do. Debra was a direct threat to her. If she could make it look like an accident then she had decided that she was going to live with that and be able lie to Dexter about it so that they could have a life together.

Obviously Hannah is going to be back next season, so is there still any future left for Dexter and Hannah? They've been through some weird trials: he put her in jail and she tried to kill his sister. But do you think there's any future for them that doesn't end up in a bodybag?
Yea that's tough. If there is, it's a pretty difficult one to figure out, that's for sure.

It's the last season of Dexter so all bets are off as far as who lives and who dies. Do you want a happy ending for Hannah? Do you think she deserves one?
I'm not sure actually. I've been thinking about this myself for the past couple weeks trying to figure out what I would like for Hannah, but I don't know. It's a hard thing to answer. Plus I'm sure the writers would come up with something way better than I would for her fate. [Laughs]

I asked for some questions on Twitter and so many people wrote me back asking if you would be doing more work on Broadway. People really enjoyed your work in Golden Boy. Do you see more theater in your future?
I think there is! I think it's safe to say that would be a yes.

How was your Broadway experience?
Oh it was wonderful. It was really challenging and extremely rewarding at the end of the day. I would definitely do it again, but it's definitely hard work.

What's next for you after Dexter? Do you have any projects coming up?
I have a movie coming out in January of next year called I, Frankenstein with Aaron Eckhart and Bill Nighy.

My last question is kind of a wacky one. In a faceoff who do you think would win: Sarah or Hannah?
Well if Hannah didn't get to Sarah's cup of tea first, if they were just fighting face to face? I'm pretty sure Sarah Walker would kick Hannah's butt. [Laughs]

The seventh season of Dexter is currently available on DVD and blu-ray. The eighth and final season starts on Showtime June 30th.