On a cold November morning, 300 children gather in a football field in Zaatari, a Jordanian village next to the country’s largest refugee camp. Most of them are Syrian who fled from Homs with their families and now live in makeshift tents in what was already a poor rural area. But today the children are not lining up to collect food coupons or clothes from NGOs. They are here to watch the clowns.

On the “stage” — a velvet curtain covering the goal — a tall, blond woman performs a handstand while doing the splits, while two others run around clapping and making funny faces. As the upside-down woman pretends to fall, the children burst into laughter. The performers are circus artists from Sweden, who, like many Westerners, felt compelled to come bring some relief to the hundreds of thousands of refugees. But instead of supplies, they bring stuffed animals, magic tricks and bubble wands.

“Making them laugh is so much easier than I thought!”

“Clowns Without Borders” is a global network of nonprofit organizations that, for the past 20 years, has been spreading laughter in the world’s saddest places, using humor as a tool of psychological relief. “It’s very important to give kids a chance to be kids again,” explains Lilja Fredriksson, one of the Swedish performers, “especially after all they have been through.” This is their last of a series of 11 performances in Jordan for poor communities and children with disabilities. 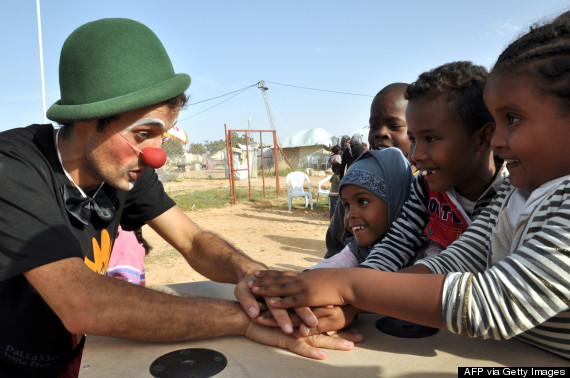 Tunisian clown plays with Somali refugees in a refugee camp on April 27, 2012 in Choucha, near the Tunsia-Libya border. (KHALED MECHERGUI/AFP/GettyImages)

“Making them laugh is so much easier than I thought!” says Anja Duchko Zuber, another clown who says that performing in front of Swedish kids is more difficult because they are “desensitized” to it. But for Syrians, watching blond women in bright clothes with lots of makeup stumbling over one another is a unique sight.

Can an hourlong circus act really change the troubled lives of refugee children? Unlikely. Psycho-social activities can be crucial in helping kids’ emotional well-being, but the artists’ efforts can be easily wasted without the right expertise. “It’s absolutely crucial that performers are very prepared before they visit places like refugee camps,” says Mahmoud Shabeeb, CARE’s communications officer for the Syria response. “Despite the best intentions, it’s very easy to have bad surprises and shortcomings when you don’t really understand the circumstances you’re working in.”

The younger kids are both fascinated and a little confused by the clowns. Nour, an 8-year-old, watches mesmerized as the clowns blow soap bubbles over her head. “They are my favorite!” she says. Still, not all jokes translate and the audience is often unpredictable. When one of the clowns pops a balloon full of confetti, children storm the stage to gather the little bits of paper. It takes a few minutes for the crowd to settle. Next comes a magic trick. Lilja shows the children a blank book, but before she can make the images magically appear, a child runs to give her a pen.

And, of course, some older children are not that impressed. “You are not fooling me. I can see you put that in your pocket,” says one of them in Arabic, adding, “They are not funny.” Meanwhile, teenagers perched around the stadium fencing seem unfazed by the pirouettes of the professional circus artists. But they don’t leave.

After the show, the children hang out with the clowns until the volunteers say its time to go. “It’s always the adults that get saddest when saying goodbye,” says Delaire. “The children just live in the moment. And it’s a good thing.” 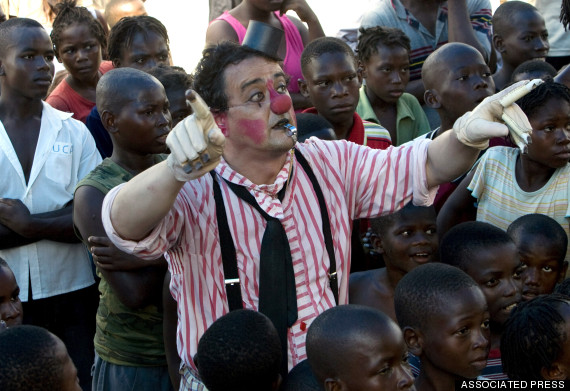 A clown from "Clowns Without Borders" performs for children in Cite-Soleil in Port-au-Prince, Friday, Aug. 8, 2008. (AP Photo/Ramon Espinosa)