It's not every day I feel out-swagged by a 12-year-old, but yesterday was one of those days. Zach Marks -- teen genius behind new social networking site Grom Social -- came by the Huffington Post offices in New York to chat about his latest after-school activity.

This pre-teen isn't shy about the fact that Grom Social has completely taken over his life. After a full day's worth of media interviews, Zach showed up with his confidence in check, decked out in Grom gear from head to toe, and even joked about how the lingo based on this new site follows him around. "When I told my friends I was going to New York City, they asked me if I was going to see the 'Grom-pire' State Building," he said.

Zach let us in on some of his Grom-related secrets and gave insight into this up-and-coming social network for kids.

Krystie Yandoli: What made you want to create the site in the first place?
Zach Marks: It was because my Dad caught me on Facebook, twice. My Dad caught me, then I went back on and made a fake account, and I got caught doing the exact same thing. And we had an argument and I told him in the middle of the argument, "There's no safe social network that's made for kids."

Where does the name "Grom" come from?
It comes from Australia. Everyone gets called a Grom if they're under the age of 16, and everyone in my family surfs. We're very involved in the surf world, so we know lingo like "Grom."

What are the major differences between Facebook and Grom for teens?
Parents are really involved on Grom. You need a parent's email to sign up and they get a copy of everything you do.

That sounds pretty "grom"-breaking. So parents are obviously thrilled about this.
Yeah, every two weeks you get a report card that's sent to your parents and it shows what your kid's chat history was, what you clicked on, and who you became friends with. So if there's some adult the parent doesn't know but the kid accepts it because he wants a lot of friends, the parent can know about it and deny it.

How come you thought it was important to add sections for anti-bullying and anti-drugs education on Grom Social?
Growing up, I would see a lot of kids get bullied and it made me an anti-bully kinda guy, and an anti-drugs guy.

Why do you think "Grom-atars" a better idea for teens to use instead of actual, real-life photos?
Well, you can post your own photos. When you sign up you can use a Grom-atar or a picture of you, whatever you like better. A lot of kids like the characters since you can change the way they look like their hair color, shape, and style.

Do you think it's important for teens to be on social media?
Definitely!

What made you want to go to your brother for help when you first created the project?
We wanted to make it a surprise for my Dad and I didn't want him to know I was using money to do it yet. It took us four months to actually get the website up and running and decide on a logo.

Do you look up to any other tech entrepreneurs?
Mark Zuckerberg. 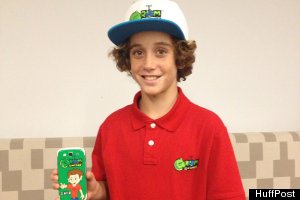