The Boy Scouts of America's anti-gay policy came under scrutiny once again after supporters of an ousted lesbian den mother presented a petition with over 275,000 signatures during the organization's annual Florida meeting.

On hand to deliver the petition was Zach Wahls, the Iowa-based student whose impassioned pro-marriage equality speech became YouTube's most-watched political clip last year after going viral in the blogosphere twice. Wahls, whose book "My Two Moms: Lessons of Love, Strength, and What Makes a Family" was released last month, spoke in defense of Jennifer Tyrrell, the Ohio-based lesbian mom who was forced to resign as den leader of her 7-year-old son's Tiger Scout troop.

"While today's meeting was productive and thoughtful, the delivery of these petitions marks the beginning of this journey, not the end," Wahls, himself an Eagle Scout, is quoted by the Gay and Lesbian Alliance Against Defamation (GLAAD) as saying. "I thought our dialogue today was an honest one, and I'm looking forward to continuing the conversation in the months ahead. We leave today one step closer to religious and personal freedom than when we arrived, and it's hard to be anything but thrilled about that."

Also speaking out this week was pop singer Kat Graham, who performed "Put Your Graffiti On Me" on "The Ellen DeGeneres Show" in a Boy Scouts uniform in honor of Tyrrell and her petition.

Wahls, who was raised by a lesbian couple, previously discussed Tyrrell's case in a blog for HuffPost Gay Voices: "I learned in the Boy Scouts that bravery is not the absence of fear but the mastery of fear. But as long as this policy remains the official position of the BSA, that lesson will ring hollow. I learned in the Boy Scouts the importance of standing up for what's right."

The Associated Press quotes Scouts spokesman Deron Smith as saying there are no plans to change the policy, but the group values freedom of expression.

GLAAD officials noted in a statement that Wahls and Tyrrell will appear together this upcoming weekend at the GLAAD Awards in San Francisco.

Check out photos of Wahls presenting the petition courtesy of GLAAD below: 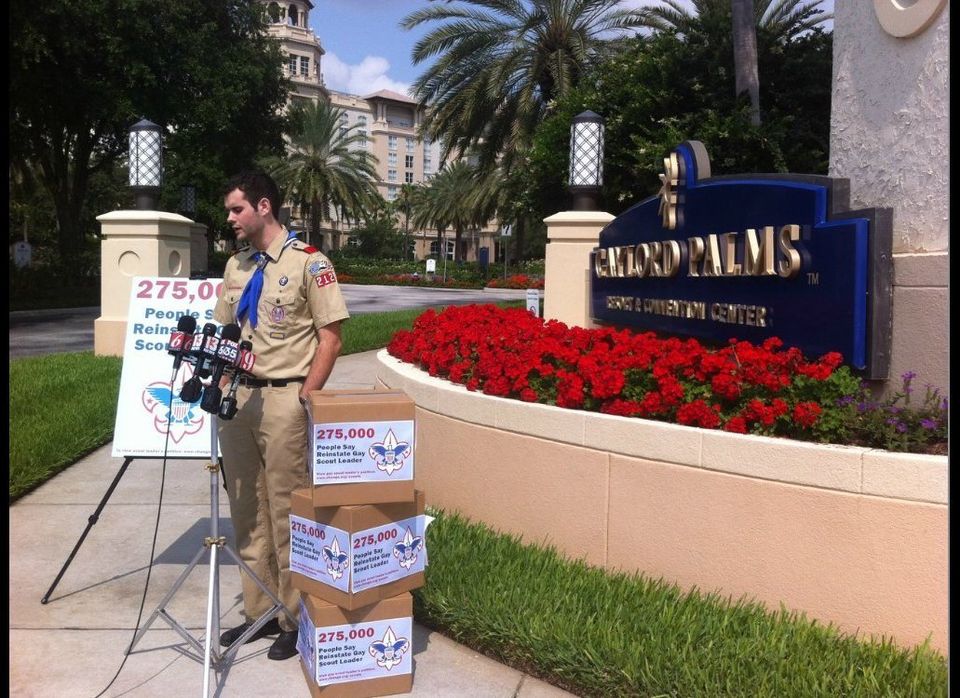