"Jackass" star Ryan Dunn was not the only person to die in the tragic car crash in West Goshen Township, Pennsylvania early Monday. He had a passenger, whose identity has now been revealed.

The passenger was Zachary Hartwell, one of the men posing in the photos Dunn posted to Twitter of himself drinking with friends just hours before the crash. Hartwell was a Navy SEAL with three tours of duty in Iraq, RadarOnline.com reports. He had been married less than a year, to wife Rachel.

UPDATE: SOCNet.com reports that Hartwell was indeed in the Navy, but not a SEAL.

The pair died in a fiery crash at around 2:38 Monday morning. Dunn may have been speeding at the time, and though he had been drinking alcohol, the initial police report did not indicate that intoxication was suspected as part of the reason for the crash.

In the photo below, he is pictured to the viewer's right, opposite Dunn. 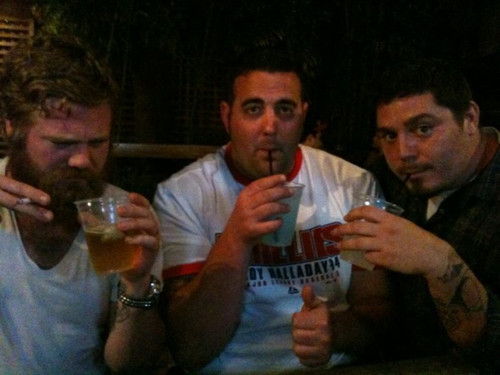