"I thought about it as coming out from behind the wall. Walls now are only as high or as thick or as strong as we allow them to be."

That's how Zachary Quinto describes his decision to publicly address his sexuality in a new interview with Out magazine. The "American Horror Story" hunk speaks at length with Aaron Hicklin about coming out as a gay man in a New York Magazine profile last year, and also shares some intimate details on both his childhood and current love life.

It may come as a surprise to some fans to learn of Quinto's earliest dating struggles -- something the star partly attributes to having lost his father at a young age. “I found myself in a pattern of being attracted to people who were somehow unavailable, and what I realized was that I was protecting myself because I equated the idea of connection and love with trauma and death," he recalls. "I had to do a lot of work on the couch to really get to a place where I was able to show up to a relationship with someone who was actually capable of being in one -- and that took a lot of trial and error. And I’m still working on all that stuff -- that will never stop."

Not only does the 35-year-old actor say he wants children, but he also confirms reports he's dating fellow actor Jonathan Groff, who can currently be seen opposite Kelsey Grammar in "Boss" and is known for his guest-starring role as Jesse St. James on "Glee." Otherwise, though, he remains tight-lipped about the relationship, simply noting, "I'm incredibly happy, I'm incredibly lucky."

Read the full Out interview with Zachary Quinto here. 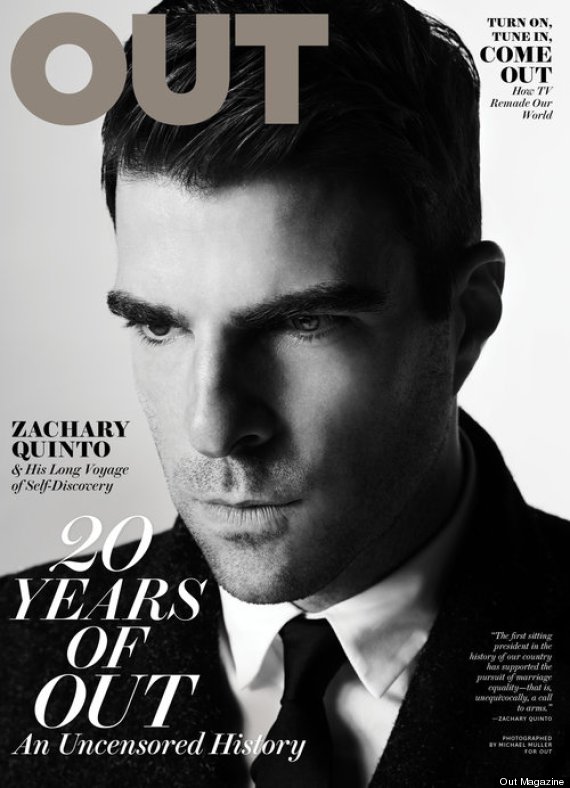 Zachary Quinto On Coming Out As A Gay Man, Dating Struggles And His Celebrity Boyfriend
Celebrities Who&#039;ve Come Out As LGBT

1 / 29
Jim Parsons, 2012
<em>New York Times </em>scribe Patrick Healy confirmed "The Big Bang Theory" star's sexuality<a href="http://www.nytimes.com/2012/05/27/theater/jim-parsons-prepares-for-his-lead-role-in-harvey.html?_r=1" target="_hplink"> as part of a profile</a>. The revelation came late in the article, when Healy describes the 39-year-old actor's role in the 2011 revival of Larry Kramer's HIV/AIDS crisis drama, "The Normal Heart." Wrote Healy: '"The Normal Heart" resonated with him on a few levels: Mr. Parsons is gay and in a 10-year relationship, and working with an ensemble again onstage was like nourishment, he said." Though the <em>Times </em>didn't identify Parsons' partner, he has been romantically liked with art director Todd Spiewak (pictured).
AP