I recently viewed the San Francisco production of author Jewelle Gomez's play Waiting for Giovanni, an electric look at the wrenching inner struggle of James Baldwin -- a spokesman for the Civil Rights struggle in the brutal wake of Emmett Till -- as to whether he should publish his gorgeous, too real novel Giovanni's Room. His fear was that his faggotry would compromise the movement. Though the play investigates questions of loyalty between identity struggles -- black vs. queer -- the real struggle is even more primal: community vs. self, the pressure of a marginalized artist to produce work for the Cause vs. the desire to produce work that satisfies a deeper, personal inspiration.

Photographer Amos Mac is the creator of the publication Original Plumbing, made to give voice to a transgender male population whose cultural invisibility belied their vast numbers and revolutionary impact. OP is a 'zine for the people, where a diversity of trans men speaks to individual experiences and struggles while being delightfully glamorized by Mac's colorful eye, which transforms all subjects into Tiger Beat pinups.

With his latest effort, the burgeoning publishing mogul shifts a gear that looks to me like a focus from the people to the artist -- the rich, mesmerizing and artistically elevated art publication, TRANSLADY FANZINE. As coffee-table as OP is pocket-sized, TRANSLADY FANZINE does not attempt to hand a microphone to the infinitely varied experience of transgender females, but rather is the product of an obsessively intimate collaboration between Mac and a muse, the acclaimed performance and video artist Zackary Drucker.

Executed over a long, snowed-in weekend wherein both Drucker and Mac traveled from California to Drucker's upper-middle-class family home in upstate New York, the resulting photos veer between classically sleek fashion editorials to the slightly perverse work of Terry Richardson to the more overtly sexed-up fetish of Richard Kern -- with a dash of Catherine Opie, Nan Goldin and Diane Arbus to throw a bit of personal identification over that male gaze. The result is stunningly complicated and luscious -- the photos of a man who desires his subject but whose mutual kinship as transpeople creates a bond that is crucial, palpable and famously void in the work of male photographers shooting half-naked women. The agency Drucker takes within the project (TRANSLADY FANZINE was a true collaboration, with the model setting up shots and controlling how she was represented) isn't contaminated by the ever-presence of straight-male desire, which tends to negate female efforts to rise up within the male-controlled eye (like, how do you escape objectification if the male gaze objectifies feminist, "powerful" women?). Being trans people whose status and safety in our culture is at a persistent code red, where everything from access to a simple bathroom to the true threat of murder impacts the daily, Mac and Drucker's relationship is empty of traditional man-woman power dynamics. And as politicized people somewhat freed from having to tow a party line -- queer and feminist circles have not yet gotten right about trans people and their lives, so why bother? -- what we get is a visual free-for-all that plays with sexuality, female subjection, power, wealth, vulnerability, victimization, family, comfort, safety, secrets -- everything you hope to see in such a personal project. The pleasure is a perfect balance of voyeur and aesthete, the photography layered with subtext and totally breathtaking.

On the cover, the classically beautiful Drucker poses in lush furs like some Russian princess, only she's naked, the pelts playing peekaboo with her androgynous body. She reclines on the snow-covered risers of a football stadium. There is so much going on here it's insane -- a nod to a slavering public's desire for the otherness of trans bodies and their concurrent desire to hurt it (the protective, even Shamanistic donning of animal skin); the nakedness in the snow a visual metaphor for the mad hassles any trans woman faces when she leaves her house each day; the nudity in a football field calling to mind the rape-myth of the slut who takes on the whole team under the bleachers. Drucker's body is female and as such has access to all the beauty and horror that comes with such a thing. Were Mac and Drucker thinking of all this as they arranged their photos? Probably not; they were probably just wired on coffee, high on empathy and inspiration. But these concepts are not cerebral, though they look that way in an artist's statement. They're deeply intuitive, cellular reference points that come from living an actual life in actual bodies, in this case, trans bodies.

There's Drucker applying makeup from a Louis Vuitton makeup case, before another photo, a glamour shot of three purring blondes -- is one of them Drucker? Do all blondes look alike? What about the homogeneity of femininity and how Drucker owns and subverts it? I mean, she's a girl and wants to be pretty, right? Don't we all? Are transwomen allowed to just be fucking pretty for a minute, or is she required to be a constant embodiment of a struggle? How exhausting. Radical feminist and queer communities can be terrified and punishing of a transwoman's desire to "pass," though "passing" often just means "looking good," something I -- a feminist and queer -- personally strive for every day and no one gives me any shit about it. What about the longing to be stealth, to simply be your gender without all the politicized hassle, so many marginalized people trying to snag you for their own? Maybe a girl just wants to throw on some eyeshadow and hit the mall, jeez. An essay by Drucker, included in the publication, outlines a female's lifetime of negotiating fashion for self-expression, with somewhat higher stakes. Mac includes text, as well, a thank-you letter of gratitude and solidarity from photographer to model, and the stakes here are higher, as well.

Though there are pictures of Drucker with mouth duct-taped in a basement storage room (dig the Tidy Cat detail, the fondue pot and Black & Decker), and a favorite of the model stark naked, convulsing languidly on a dining-room table while her mother is seen in the next room, washing dishes, a sweater hung preppily over her shoulders, one of the most vulnerable images comes at the end, a wide, two-page shot of Drucker in her father's old baseball shirt. It is beyond threadbare, held together by wisps of fabric, but the velvety "DRUCKER" is legible across her back. Her hair is mussed, her makeup scant and smudged; maybe she just woke up. She's looking backwards into the camera, making eye contact with the viewer with her mouth maybe opening -- she's like, Yes? Not confrontational; she just sees us looking at her, all of us. Throughout the whole captivating book Drucker sees us looking at her, and it's tempting to feel like she's looking back. But she's not, of course -- not at us. She's looking at Amos Mac, and the frankness and trust in her face is what makes the pictures.

TRANSLADY FANZINE, named by Zackary Drucker, is the first of a series of publications in which Amos Mac will collaborate with a transgender female model. Issue 1 can be purchased at transladyfanzine.com. Selected and unpublished photographs from TRANSLADY FANZINE will be on view at Luis de Jesus Gallery in Los Angeles, Dec. 10 through Jan. 22. For more information visit luisdejesus.com. 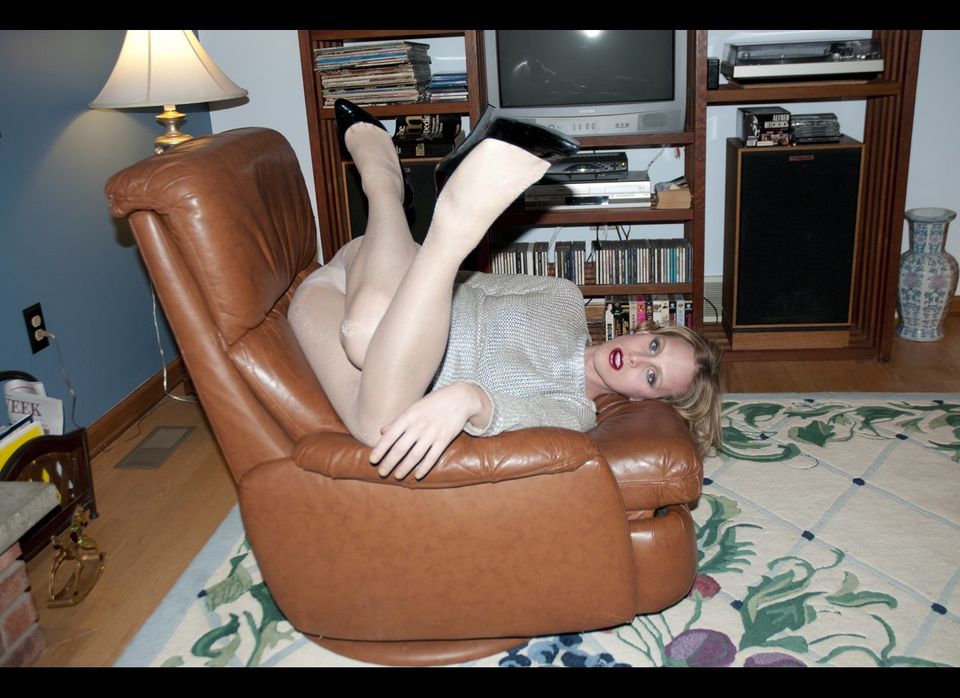