As an avid cyclist who regularly rides in New York City, I'm always looking for ways to make riding safer.

So I was intrigued to learn about Zackees, a company that on Monday launched a Kickstarter campaign to raise money to mass-produce its first product: Turn Signal Gloves.

The gloves are exactly what they sound like: Cycling gloves (the company is also marketing them to runners, rollerbladers and skateboarders) adorned with bright amber LED arrows to let those around you know that you're there and turning.

Much of the focus on so-called wearable technology has centered on gadgets like Google Glass or activity trackers like the Nike Fuelband or the Jawbone UP. But a handful of companies are betting that embedding sensors and electronics in clothing will be the next big thing.

Under Armour, the sportswear giant, showed off the E39 in 2011, a prototype shirt with a sensor that measures heart rate, speed and G-force. Heapsylon, a Redmond, Wash.-based startup, has designed a sensor-laden "smart sock" that detects running technique.

Zackees Turn Signal Goves, which have a processor sewn into the top of each glove, are incredibly simple to use. All it takes to light up the gloves is touching the small metal plates on the thumb and index finger together. The gloves are equipped with sensors that detect the light around you, and the brightness of the LED lights are adjusted accordingly.

The concept is not entirely new. There's at least one other company that makes a similar product. A Japanese company makes LEDs that you can velcro either to your own gloves or to theirs, but it does not appear they are currently for sale in the U.S. A notice on the website seeks distributors, and an email to the company was not immediately returned. A DIY kit to make light-up "Biking Glowes" is available on Etsy for $28.

Zach Vorhies, a Zackees co-founder, and a fashion designer friend first began experimenting with electronics in clothing about three years ago after attending Burning Man, the much-maligned weeklong party in the desert that's become popular with tech workers. He and a friend built a CamelBak-like device that would store water on their backs, but had a built-in microphone and lights, and would illuminate to the beat of music.

Vorhies worked as a software engineer at Google, so he could only work on designs outside of work. "The problem with that is that things move really slowly," he said. "It got to a point whether to take it seriously or have it as a hobby."

In August, he decided to quit his job and cash in his Google stock to focus on manufacturing the gloves. He and his co-founder, Murat Ozkan, have spent about $60,000 so far, and the company is looking to raise $35,000 on Kickstarter, the crowdfunding platform, to get the business going.

The circuit board is encased in plastic, so the gloves work in the rain, said Vorhies. You must remove the battery before you wash the gloves.

The gloves are expected to ship in May 2014. If you can't wait, you can drop $399 for an "early adopter" pair made in San Francisco. (The mass-produced gloves will be assembled in China, though the electronics are made in the Bay Area.)

Vorhies said this is only the beginning. He and his co-founder are working on a helmet. 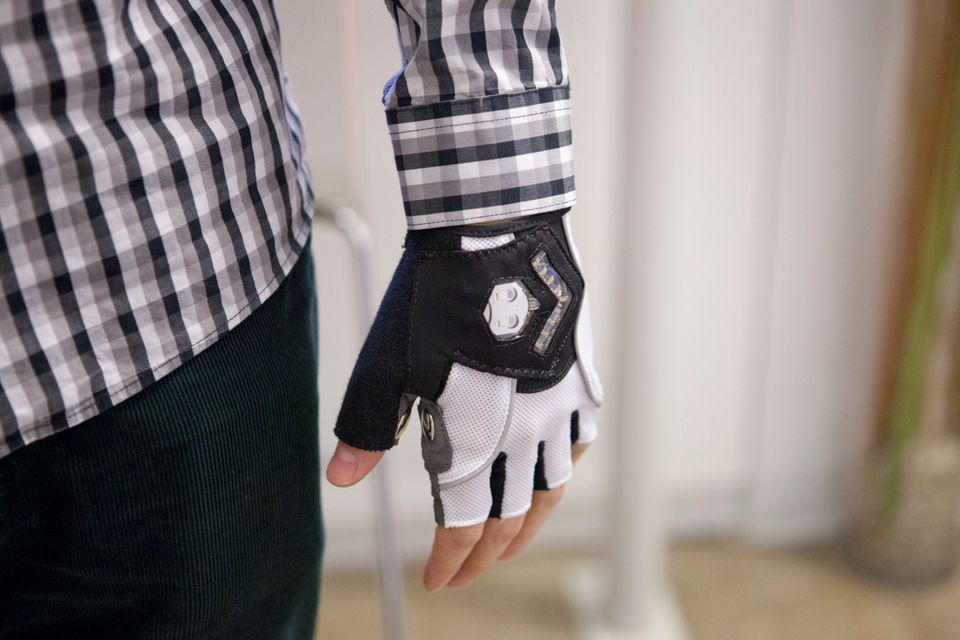