Zak Ebrahim is not my real name and was changed when my family decided to cut ties with my father, El-Sayed Nosair, the first member of a Bin Laden organization to shed blood on American soil.

As I share in my TED Talk, I have struggled for years to maintain my anonymity for fear of being judged for my father's actions, which has been a heavy burden to carry and at times, crippling. Being raised in the shadow of my extremist father, I feared being judged for having his blood run through my veins.

As I came of age, I began to bend back the bars of bigotry that had imprisoned me for years. It didn't happen all at once, but little by little, my worldview expanded as I chipped away at every lie my father, and later my abusive stepfather, had instilled in me.

Oddly enough, it was being the victim of a form of violence myself - bullying - that led me to seek a nonviolent path. When I was eleven, I once tried my hand at bullying another kid at school - but I found I could not do what had been done to me. Being bullied gave me empathy. And I realized, over time, that this empathy was more powerful than bigotry or hatred. It was this realization that helped me break a cycle of violence. 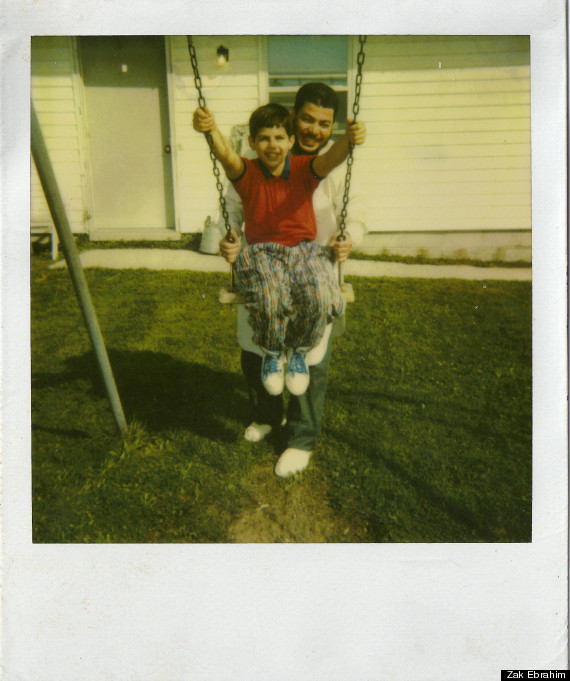 Zak visiting his father. Attica Correctional Facility, 1994. In the background: The small house where the family stayed together for the weekend. Courtesy Zak Ebrahim

"Empathy, peace, nonviolence-they may seem like quaint tools in the world that my father helped create. But, as many have written, using nonviolence to resolve conflicts doesn't mean being passive. It doesn't mean embracing victimhood, or letting aggressors run riot. It doesn't even mean giving up the fight, not exactly. What it means is humanizing your opponents, recognizing the needs and fears you share with them, working toward reconciliation rather than revenge. The longer I stare at this famous quote by Gandhi, the more I Iove how steely and hardcore it is: 'There are many causes I would die for. There is not a single cause I would kill for.' Escalations cannot be our only response to aggression, no matter how hardwired it is to hit back and hit back harder. The late counterculture historian Theodore Roszak put it this way: 'People try nonviolence for a week, and when it doesn't work, they go back to violence, which hasn't worked for centuries.'"

The Terrorist's Son by Zak Ebrahim is now available in bookstores, or you can get it for the Kindle or Nook, or through the iBookstore.

We want to know what you think. Join the discussion by posting a comment below or tweeting #TEDWeekends. Interested in blogging for a future edition of TED Weekends? Email us at tedweekends@huffingtonpost.com.