Killing scores of exotic animals after they were set free from a farm in Zanesville, Ohio on Tuesday night was the right thing to do, according to Director Emeritus of Columbus Zoo Jack Hanna.

Terry Thompson, the owner of Muskingum County Animal Farm in Ohio, set free the animals before committing suicide, the Associated Press reports. Nearly 50 animals on the loose, including lions, bears, monkeys, and 18 rare bengal tigers, were hunted down by officers.

Hanna said during a Wednesday afternoon press conference that the officers who had to kill the animals were struggling with what they had to do. He said, "Going home and saying to their kids they had to shoot a tiger, one of the rarest animals in the world, I wouldn't want to be one of these guys, having to tell my kids."

The IUCN Red List of Threatened Species estimates there are fewer than 2,500 Bengal tigers left in the wild as of 2010, due in large part to poaching and habitat loss.

At the Wednesday press conference, Muskingum County Sheriff Matt Lutz said 49 animals had been killed, and a monkey possibly infected with herpes B virus was still on the loose. He said there were a total of 56 animals kept on the farm.

Center for International Policy's Glenn Hurowitz wrote on his HuffPost blog about the "wildlife slaughter": "Police too often respond to one complaint with a hail of bullets - even when it's native wildlife like black bears, wolves or mountain lions. This is especially true in areas where predators were exterminated decades past, but are now migrating in from other areas."

He added: "Lethal measures should only be used as a last resort - and especially in cases like this, where police are dealing with highly endangered animals like tigers (3,000 left in the wild) and lions (just 23,000)."

"We are not talking about your normal everyday house cat or dog," Lutz said, according to CNN. "These are 300-pound Bengal tigers that we have had to put down. "When we got here, obviously, public safety was my number one concern. We could not have animals running loose in this county," he said.

USA Today reported Lutz said deputies did not have tranquilizer guns. "Deputies were shooting animals at close range with sidearms," he said.

"We found a mature adult bengal tiger in some brush… this veterinarian got very very close and tried to tranquilize this thing. I think we hit it, but as we did, it got up, showed very aggressive behavior towards her, then turned and started going away from her," Lutz said at the press conference. He added that because they did not know for sure if the animal had been properly hit with the tranquilizer and may have got away, they "did not want to take any chances and shot it."

According to CNN, in nearby Licking County, Sheriff Randy Thorp said the county SWAT team had been activated and equipped with night vision equipment and "necessary weapons."

WKYC-TV reports that Hanna said: "The main thing is we have a couple animal auctions in the state of Ohio that have to be shut down. It's like a drug dealer. You finally get the drugs and, you know, then the man gets the animals. So where's the source of these animals coming from? That has to be stopped and if the governor wants me involved, we will stop these animal auctions and stop it immediately. It has to be done. This is an example here. What happened here should not happen again."

CNN reports that Thompson was cited in the past for animal abuse and neglect.

Hanna said in the MSNBC interview that three leopards, some monkeys and a young grizzly had been taken to Columbus zoo until it could be figured out what to legally do with them.

MSNBC writes: "Animal-welfare groups say Ohio is notoriously lax when it comes to wild-animal ownership. It's one of fewer than 10 states that have no rules regulating the sale and ownership of exotic animals."

Delcianna Winders, Director of Captive Animal Law Enforcement at PETA told HuffPost: "This is a tragic example of how things can go very wrong when people are allowed to keep exotic animals." She added, "Animals always pay the price and [this situation] is a perfect example of this."

She said PETA hopes it will be "a wake up call to the governor" to tighten legislation on keeping exotic animals. 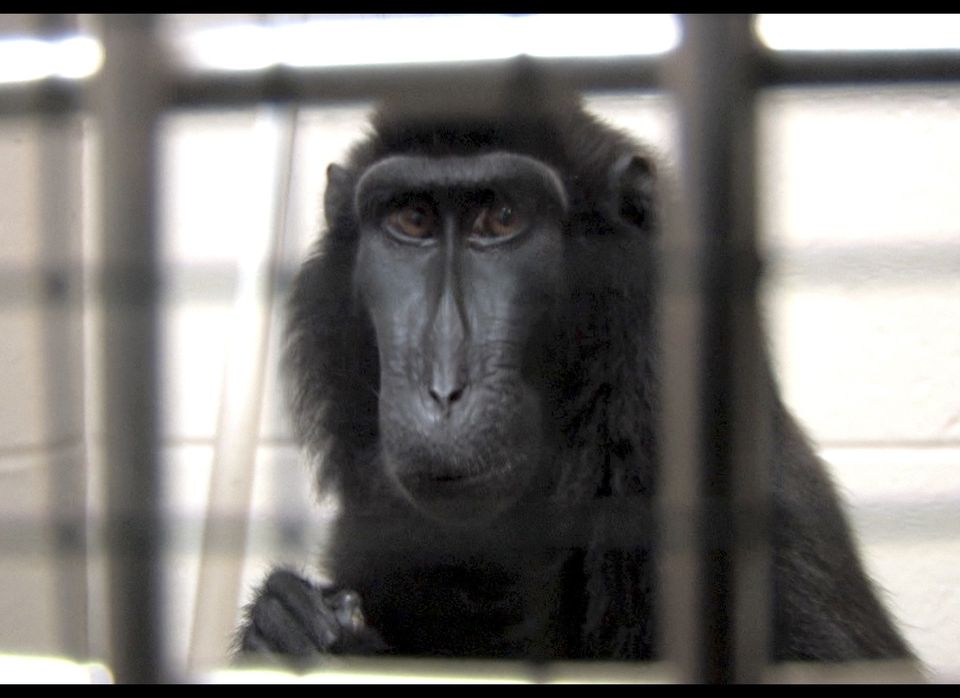 1 / 16
This is a handout photo from the Columbus Zoo and Aquarium of one of two macaques that were captured by authorities Wednesday, Oct. 19, 2011, a day after their owner released dozens of wild animals and then killed himself near Zanesville, Ohio.
AP