Fashion giant Zara pulled a children’s shirt from its stores after customers complained that the striped pajama top with a yellow star resembled Holocaust prison garb.

The shirt, produced in Turkey, was sold in the Spanish retailer's Albanian, French, Israeli and Swedish online stores. It was removed on Wednesday hours after it went on sale.

The retailer, owned by Spanish giant Inditex, flooded Twitter early Wednesday morning with multilingual apologies, insisting the garment was modeled on cowboy sheriffs of the Old West, not on the uniforms Nazis forced Jews to wear in World War II concentration camps nor the infamous yellow stars that Nazis forced all Jewish people to wear in and outside the camps.

"Zara has issued a heartfelt apology on its social network profiles," Inditex said in a statement sent to The Huffington Post. "The items will be reliably destroyed." 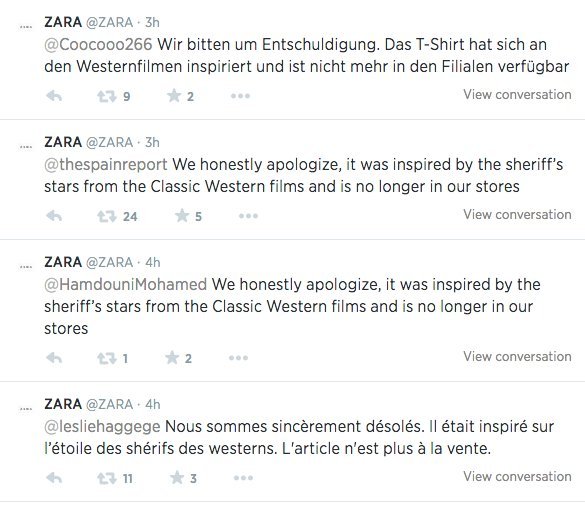 By Wednesday morning, a link to the shirt displayed a message saying the item was no longer available and redirected shoppers to a white-and-blue striped children’s shirt emblazoned with the French and Spanish word for “well,” bien.

The company said sales of the shirt "have been marginal."

Zara remained mum about the controversy on Facebook, where some of its 22.4 million fans posted comments lambasting the company for its insensitivity.

“After your concentration camp tee shirt I was wondering when is your ZYKLON B perfume coming out?” one Facebook user wrote, referring to the cyanide-based gas used by the Nazis to slaughter more than 4 million Jews, “for those wanting to smell like the gas chambers?”

“Whomever the anti-Semitic person is that decided to market your Nazi-inspired “sherrif” t-shirt should be fired!,” wrote another. “I will never, EVER buy any of your products again!”

This isn’t the first time Zara has been accused of anti-Semitism.

In 2007, the company was forced to withdraw a $78 handbag after a woman in Kent, England complained in the Daily Mail it was embroidered with Hindu and Buddhist symbols that resemble swastikas. The bags were produced by a supplier in India.

Two years later, the Anti-Defamation League defended Zara against a chain email claiming the company “has been openly anti-Semitic for a long time.”

“The suggestion that Zara is ‘anti-Semitic’ is false,” the ADL said in a statement. “And the ‘bags with swastikas’ reference involves an isolated incident that Zara’s parent company quickly remedied.”

But, amid a recent uptick in anti-Semitic violence around the world in response to the war between Israel and Gaza, many found the company’s excuse tonedeaf. The fact that the shirt was stitched in Turkey, which has engaged in saber-rattling with Israel under the rule of now President-elect Recep Tayyip Erdogan, only salted the wound.

“Israel has no ‘sheriffs.’ Moreover, the world ‘Sheriff’ vanishes in letter that are transparent, outline shapes on the bright yellow fabric of the star,” Hana Levi Julian wrote in the Jewish Press. “To survivors of the Holocaust and their relatives and friends in Israel, that message is crystal clear. It is especially loud after recent fiery rhetoric from [Erdogan,] who has made his dislike of Jews and Israelis very plain over the years.”

Later on Wednesday, the ADL welcomed Zara's swift apology and removal of the shirt.

"This is not the first time we have seen a retail clothing company make this same offensive mistake," Abraham H. Foxman, the group's national director and a Holocaust survivor, said in a statement. "The fact that this keeps happening shows that there is a serious need for education about the Holocaust and the history of anti-Semitism."