She doesn't hold any royal or noble titles, but Zara Phillips has been given a unique title all her own: "RILF."

Phillips, whose mother is Britain's Princess Anne, covers the October issue of Tatler with the cheeky headline: "Zara! Is she the only RILF? (That's R for Royal)."

That's a title we hadn't heard before (and also one that, if she'd been the one to marry Prince William, would be owned by one Pippa Middleton).

But Zara's the real royal and an appealing one at that: not only does she have the looks, but in the Tatler story she displays her sense of humor and laid-back ways.

She was, after all, the royal known for having a pierced tongue. "At least I didn't have it coming out of my nose or anything," Phillips tells the magazine, according to People.

Zara and husband Mike Tindall, married on July 30, are known for maintaining a low-key, non-royal lifestyle. Both professional athletes (she an equestrian, he a rugby player), the couple celebrated their union with quite regular (read: wild) bachelor and bachelorette parties and decided to forgo an elaborate honeymoon so they could return straight to work.

Will they finally be taking that honeymoon anytime soon? Zara quipped to Tatler that a trip is currently out of the question -- "possibly until we're both retired."

She does have time, however, to pose for magazine covers. Looking fresh-faced and dewy, Zara is certainly positioning herself for the title of One and Only RILF.

We wonder what Mr. Tindall thinks about that. 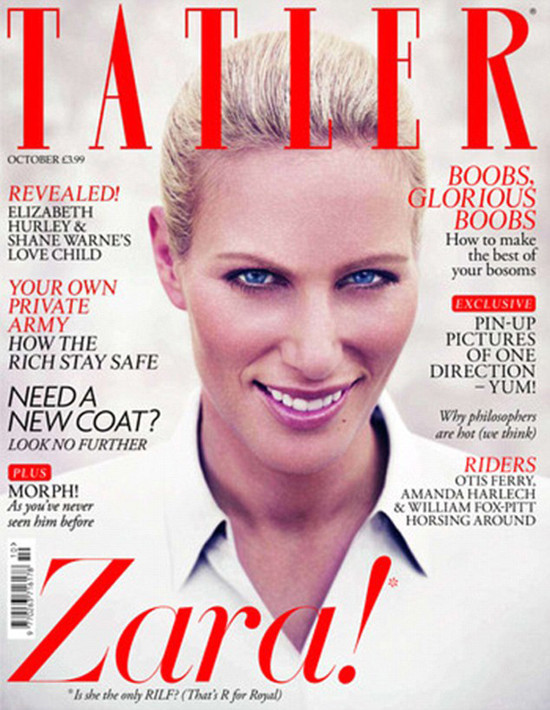