The following is the English translation of statements made by the Iranian Foreign Minister Muhammad Jawad Zarif at the Iraqi Ministry of Foreign Affairs press conference with his Iraqi counterpart Foreign Minister Ibrahim al-Jaafari, in Baghdad on 27th July 2015. 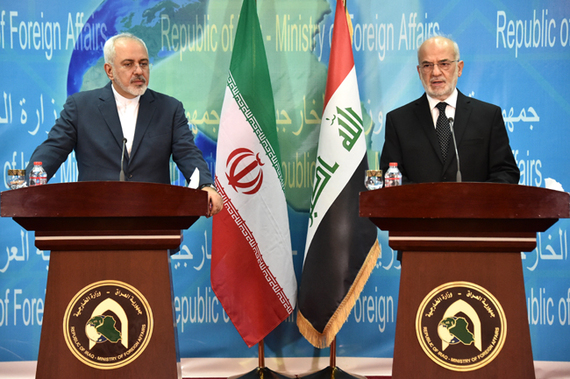 Many thanks to my dear brother the Foreign Minister Dr. Ibrahim al-Jaafari for his generous words and the kindness shown towards the Islamic Republic of Iran. We are thankful for the warm welcome and the generous hospitality and we must thank the Iraqi people not only for the hospitality that we always witness, but also because this proud nation is on the frontline against terrorism and extremism. These resilient people have given everything dear and precious, and have given martyrs on this holy path for the achievement of a noble cause.

We believe that we are done with an artificial and contrived issue [nuclear issue], and with that success we hope to build on this a new foundation and solid development, for it is time now that a new chapter is opened in this region. What binds us together in this region is our common interest, the [roots] that are shared between us: a shared history, a common religion, a common culture, and a common geography. There is not a single problem between us in this region [worth disputing over], and we must embrace dialogue in order to get rid of any misunderstanding. We cannot allow any group to exploit our culture, our ideas, and our religion to carry out criminal acts in the name of Islam, and to besmirch the reputation of Islam, and more. I am here in Iraq to assure [our] Iraqi brothers that the Iranian people and the Iranian government stands by the Iraqi people and the Iraqi government. We assure that we are with you and that we can depend on dialogue based on brotherhood, affection and regional cooperation against extremism and terrorism which threatens everyone, and this dialogue must be adopted by all [our] neighbors. I see no reason for our friends in the region to be fearful of a nuclear agreement, because this deal will bring more peace and security to the region, and there is nothing to fear from peace and security. But my message to the countries in this region is that this deal has in fact resolved an artificial issue, and after this deal we must tend to the key priorities of the Islamic Republic of Iran in facing the shared problems of this region, most importantly of which are the issues of extremism and sectarianism, and the Islamic Republic of Iran extends its hand to everyone. The Islamic Republic of Iran is a strong country before and after the [Nuclear] deal, and this strength is at the service of our neighboring countries. In our point of view, with respect to the developments in Syria, Iraq and Yemen, it is possible that some dispute may be stirred up with others from this region, but we emphasize security, and we consider the security of any country in this region to be our security, and we will make any effort to cooperate with our neighboring countries. [With respect to] the provision of collective security, there is no danger from Iran to anyone else, and the Iranian people have overcome the past and forgotten it in order to build a bright and better future. The politics of the Islamic Republic of Iran is to always adopt dialogue, but unfortunately there was a cloud that was a result of the nuclear issue, however this cloud is beginning to disappear and now we may address our priorities and the [issues] between us in this region, by paving the way for regional cooperation. We believe that all the countries in this region must cooperate and work against terrorism, extremism, and sectarianism, and there must be a role for all countries in the region to stand against terrorism. We have begun with our friends in Turkey in discussing regional issues, this is despite disagreements between us such as the use of force outside international borders. With regards to the Saudi government, we are against the use of force against the Yemeni people by this government, and we believe this will achieve no result. We have not put any obstacles in the path of dialogue between regional countries including the Kingdom of Saudi Arabia.