The two of them hit it off immediately, despite her occasional lapses in English and his far-worse grasp of Chinese. He's jetlagged and disoriented and makes bad jokes about Bon Jovi, but she thinks he's cute, and they find themselves back at Malcolm's hotel room.

To break the sudden tension, he offers her a Sprite from his mini-bar. Well, first he asks her how to say "Sprite."

"Shui Bi," he repeats, but his intonation is off.

"Fourth tone," she tries to correct him.

"Bi?" he says again, changing his tone ever so slightly.

"This is very bad word you say, Malcolm," she says.

The linguistically-challenged connection between Malcolm and Xiao Mei winds its way through the heart of "Outside People," a play about misconceptions, misunderstandings and how deep-seeded differences can excite and cripple relationships at once. It's also about how one works to adapt to a culture, without ever feeling quite at home.

All themes the playwright, Zayd Dohrn, understands all too well. As the son of onetime Weather Underground leaders Bill Ayers and Bernardine Dohrn, he spent some of his earliest years watching his parents hide from law enforcement, strangers in their own country. He watched his mother go to jail. And in 2008, he watched as Barack Obama struggled to define his own tenuous connection to Ayers, now an esteemed, retired education professor who was being attacked by Republicans as a "terrorist."

Over the past decade, Dohrn himself has shared a few experiences with the Malcolm character in "Outside People," balancing his years between the U.S. and China along with his wife, the writer Rachel DeWoskin.

"I'd written a lot of plays in China," said Dohrn, who is not quite fluent in the language himself. "But ["Outside People"] is my first play actually about China. Rachel always spoke the language, and she lived there for a long time before we met. I always felt like I didn't have a story about it. This play came out of that; I really wanted to tell a story about this place."

Dohrn met DeWoskin during graduate school, at Boston University, where he studied playwriting and she studied poetry. She had only just moved back to the U.S from China, where for most of her 20s she'd been working as an actress on an extremely popular late night soap opera called "Foreign Babes in Beijing." Playing an American girl named "Jiexi" who pined emphatically for Chinese men and shouted things like "I love you! Be with me! What are you waiting for?!" DeWoskin was watched by 600 million people across the country.

According to Andy Donald, artistic director of Naked Angels, the producing company co-helming "Outside People," she can barely walk down the street in New York's Chinatown without seriously rattling a few star-struck passersby.

DeWoskin's experience translated into a best-selling memoir (also called "Foreign Babes in Beijing") that she and Dohrn are working on developing into a TV show with HBO.

So indeed, China is as much a part of Dohrn's life now as it is hers. Though she still remembers the first time she took Dohrn to visit, in the earliest days of their courtship. To "test him," in her words.

"I wanted to see if he had a hearty constitution for culture shock," she explained. "We stayed in terrible rat-littered youth hostels and climbed Jade Dragon Snow Mountain."

Dohrn added that immediately upon landing in Beijing, DeWoskin thrust him into a loud restaurant to meet a bunch of her friends. Like the Malcolm character in his play, Dohrn says he was jetlagged and quickly drunk and overwhelmed by the constant energy of the place.

"Now we go back every summer," DeWoskin said. "So I think Zayd's experience has been tremendous alienation and culture shock, but also constant observing. He's been observing it all for so many years at this point." 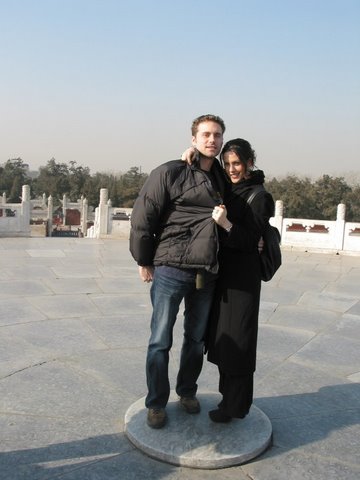 Today, both Dohrn and DeWoskin share many of their cultural reference points, and can observe together. She's the self-professed "firecracker" and he "holds the ship down." They've come to understand each other, DeWoskin said, "with tremendous precision and clarity."

"And we have tons of little kids between us," she added. "Or, I mean, we have two. But it feels like a lot."

That mutual understanding means that their work can occasionally bleed together. In DeWoskin's debut novel, "Repeat After Me," a young American English teacher meets a mysterious Chinese national in New York and immediately falls in love with him. As in Dohrn's "Outside People," two characters from very different backgrounds end up struggling to bridge their cultural divide with moments of emotional clarity and utter failure, occasionally letting sloppily predetermined ideas dictate the way they treat one another.

In "Outside People," the differences become overwhelming, but Dohrn believes that in real life those divides may be crossed.

"Several couples like [Malcolm and Xiao Mei] have come up to me after the play saying they've been able to make it work, they're married and living their lives," he said. "I think people traverse things all the time."

Outside People by Zayd Dohrn runs through Jan. 29 at the Vineyard Theatre in New York. Evan Cabnet directs. Watch a trailer for the show below.