The Zen gardens of Japan are known internationally for their enigmatic beauty. After the passage of centuries, that beauty is still vibrant -- and still enigmatic.

The first Zen rock gardens appeared in Kyoto in the fifteenth century. Several of the era's leading Zen masters also happened to be master gardeners. They introduced layouts centered on rocks and sand rather than flowers or trees, lawns or water. These are not gardens in the familiar Western sense ("rock garden" may yet sound oxymoronic). The Japanese term is karesansui, or "dry-landscape."

The classic example is a garden in northwest Kyoto that is part of Ryōanji, a Zen temple: 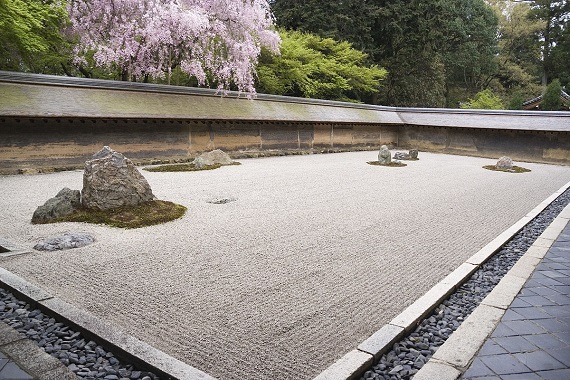 Slightly larger than a tennis court, the garden is enclosed on three sides by an earthen wall. Assorted rocks are distributed asymmetrically. The only vegetation is the moss that rims the rocks. Visitors sit on a veranda (on the right, beyond the image). Rule number one: do not walk in the garden.

Rocks have long been venerated in China, Korea, and Japan. A rock might stand out because of its beauty, unusual shape, or resemblance to a mountain. In Japan, distinctive rocks were believed to be inhabited by kami, spiritual forces/beings inherent in nature. Powerful military rulers collected garden stones. When one aficionado gave away a treasured rock, he had it wrapped in silk. 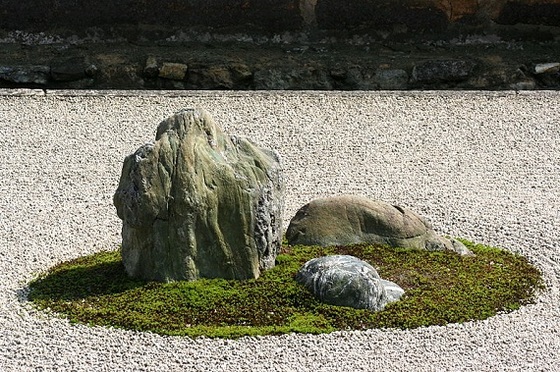 This is one of the subgroups at Ryōanji. Aesthetically, each rock has a dual role -- in a given cluster and in the garden as a whole. The sand around each subgroup is raked in a circular pattern; beyond those circles the lines in the sand are straight.

In part because the intentions of the designers remain unknown, rock gardens invite interpretation. Often the first impression is of an imaginary landscape or seascape. In Ryōanji's case, scattered islands seem to arise in a tranquil ocean, the sand patterns representing waves.

What was beautiful in medieval Japan is not necessarily beautiful today. In that era, blackened teeth were more attractive than bare teeth, flawed tea bowls more alluring than flawless ones. Yet the gardens still hold us. Is there a form of beauty that transcends culture?

In ancient Japan, nature was experienced as an intimate and fundamentally benevolent presence. Entire landscapes were considered sacred space. At Ryōanji, nature is present but also abstracted, honored but also controlled. The Japanese are especially attentive to the seasons. Zen master Musō (1275-1351) saw no gap between Zen practice and "the changing scenery of the grasses and trees through the four seasons."

We can glimpse spring in the blossoms of Ryōanji's cherry tree, and summer in the green moss of the three-rock cluster. To continue... 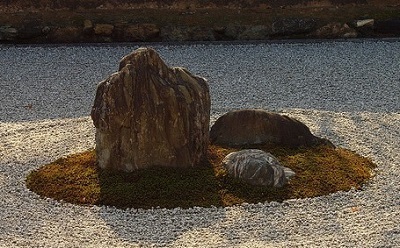 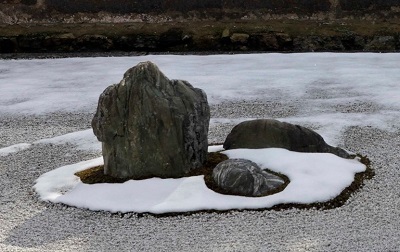 In Asian thought, continuity and change are dynamically interrelated; you can't have one without the other. And impermanence is often beautiful.

Ryōanji does interesting things with space. It exemplifies ma, a flexible concept that covers physical space, gaps in time, even the moods of places. In Japanese poetry the word iwama evokes the ma of rocks. Ryōanji also exemplifies the interplay between form and emptiness that underlies Buddhism's vision of reality. Form (rock) illumines no-form (sand), just as no-form illumines form.

Let's take a look (in cyberma) at another garden. This one is part of Nanzenji, a Zen temple in southeast Kyoto: 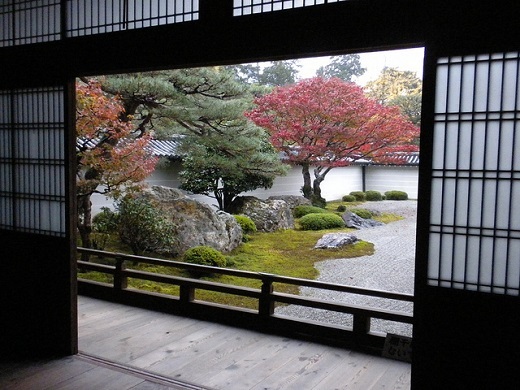 Despite the presence of plants, this garden qualifies as a rock garden. It, too, can be seen as a landscape, with the land on the left and the water (again, sand) on the right. The open doors frame a space that subverts the distinction between inside and outside. A distant view beyond the wall completes the composition. Start with China's belief in the unity of microcosm and macrocosm, add Japan's talent for miniaturization, and a bit of ground acquires a universal dimension.

It is likely that Ryōanji was designed to have a calming effect. It's also possible that the builders were aiming for something more ambitious -- an encounter that kindles spiritual insight. In the actual experience of seeing, where does 'garden' end and 'I' begin? Can a garden lift the mind out of thought?

A thirteenth-century Chinese master, Wumen Huikai, sweeps it all up in a single poem:

A hundred flowers in the spring, the autumn moon,
Cool summer breezes, winter snow --
If your mind is not cluttered by trivial things,
Every season is the best time of the year.