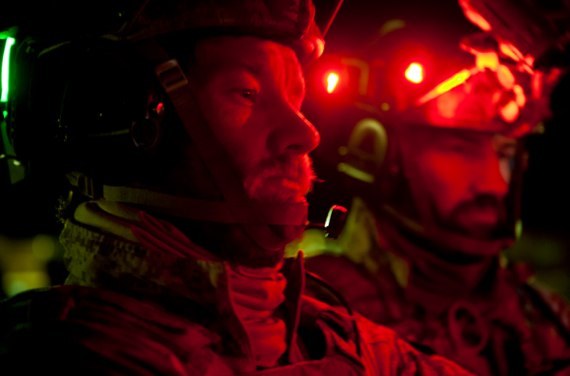 The details of Kathryn Bigelow's follow-up to The Hurt Locker, Zero Dark Thirty, have been shrouded is almost as much mystery as the actual mission to kill Osama bin Laden. The script (written by Mark Boal, who also wrote The Hurt Locker) was completed before bin Laden's death -- so, yes, some serious revisions had to be completed before filming began. You won't have a chance to see Zero Dark Thirty until Dec. 19 (and only then in limited markets; it opens nationwide on Jan. 11, 2013), but there's no review embargo so we've decided to go ahead and answer every question that you could possibly have about Zero Dark Thirty.

Q: What is a zero dark thirty?

A: According to the production notes, it is military speak for 12:30 a.m.

Q: How many times is the phrase "zero dark thirty" spoken in Zero Dark Thirty?

Q: In what year does Zero Dark Thirty begin?

A: Zero Dark Thirty begins on Sept. 11, 2001, in an absolutely gut-wrenching scene -- notable because there are no visuals, only jumbled audio of people calling from inside the World Trade Center.

Q: In what year do we first meet the characters that we will be following?

A: We meet Maya (Jessica Chastain) and Dan (Jason Clarke) in 2003 at an undisclosed location. Dan is in the process of teaching Maya how to aggressively interrogate (read: torture) a suspected terrorist.

A: No. The scenes of Americans torturing suspected terrorists are brutal. In one scene, a water-boarded detainee eventually defecates himself. Honestly, it's hard to watch.

A: Zero Dark Thirty follows Maya (and Dan, intermittently) all the way through to the eventual raid of bin Laden's compound. And, yes, a lot of things happen along the way.

A: How the United States let bin Laden escape from Tora Bora.

Q: Is there a lot of character development in Zero Dark Thirty?

A: Not really. Maya looks slightly uncomfortable during the first "aggressive" interrogation, but she ends up using some of the same techniques later. And we never learn much about her personal life -- except that she doesn't have much of one.

Q: What's the most intense scene in Zero Dark Thirty?

A: The entire last act of the film, which chronicles the raid on bin Laden's compound in Abbottabad, Pakistan.

Q: On a scale of one to 10, how intense is the raid on bin Laden's compound?

A: A sustained nine. Honestly, considering the length, it's the most intense sequence that I've seen in a movie this year. And the most interesting part is that, at least from what I've read about the actual assault, the action sticks to what really occurred.

Q: Are you trying to tell me that, in the events that inspired Argo, there were never any Iranian police cars in hot pursuit of a commercial airliner as it tried to take off from an Iranian airport?

Q: What is the last thing you expected to see in Zero Dark Thirty?

Q: Is Zero Dark Thirty your favorite movie of the year?

A: It's between Zero Dark Thirty and the aforementioned Argo -- fictional car chases and all.

Q: If Kyle Chandler co-starred in a third movie about the CIA, would that be one of your favorite movies, too?

A: Apparently, I am a sucker for CIA movies that happen to co-star Kyle Chandler.

Q: When you build a statue of Kyle Chandler in his honor, will it be the Chandler from Zero Dark Thirty or Argo?

A: To be honest, my statue will probably commemorate the Chandler from Early Edition.

Q: As in Argo, are there humorous moments to break the tension?

Q: Considering the intensity of Zero Dark Thirty, who is the most welcome face to see?

A: Chris Pratt as a Navy SEAL. Seriously, thank you, Chris Pratt, for at least delaying my Zero Dark Thirty stress-related aneurism.

Q: There were rumblings from Republicans that Zero Dark Thirty would be a very pro-Obama movie. Is that the case?

A: Obama appears in the film only once -- in a televised interview -- but the film is pretty scrupulously non-partisan.

Q: Who is the highest ranking official we see portrayed in Zero Dark Thirty?

A: The highest ranking official we see is CIA Director Leon Panetta, played by James Gandolfini. (Panetta has since been promoted to Secretary of Defense.) If anything, the Obama administration comes off as overly cautious, which, seen through the eyes of the ultra-aggressive Maya, is not a good thing.

Q: How many of the characters from Zero Dark Thirty will reprise their roles in its sequel, This is 40?

A: This is 40 is in no way related to Zero Dark Thirty. Chris Pratt did, however, appear in The Five-Year Engagement, produced by This Is 40 writer-director Judd Apatow.

A: Though it would be completely inappropriate in this case, Kenny Loggins should sing the theme song to every movie. (I would at least consider an argument for Survivor.)

Q: What movie will win the Academy Award for Best Picture?

A: Sure. Zero Dark Thirty certainly isn't perfect -- most noticeably when a CIA agent who is meeting with an al-Qaeda source is way too excited about just how well this meeting is going to go. I mean, to the point that she's bragging that the president of the United States will have to be briefed after the meeting because of all of the wonderful information that's going to be shared. Needless to say, the meeting goes about as poorly as a meeting with a suspected terrorist can go.

Q: How many The Lord of the Rings references are in Zero Dark Thirty?

Q: Does Zero Dark Thirty end with a scene of The Rock tweeting the news of bin Laden's death to the world?