It takes a certain audacity to exploit the memory of the holocaust while at the same time disregarding those both lost and surviving 9/11 in the way that Naomi Wolf did in her January 4 Guardian column, just to slap Kathryn Bigelow for her frank depiction of torture in Zero Dark Thirty.

When Wolf locates Bigelow alongside Nazi propagandist Leni Riefenstahl on the wrong side of history, she may or may not be intentionally evoking memory of Susan Sontag's famous 1974 essay, "Fascinating Fascism", which critiques Riefenstahl and her film Triumph of the Will -- the cinematic masterpiece released to the world in 1935 as a paean to Hitler and his National Socialists and led to the catastrophic events we know too well. 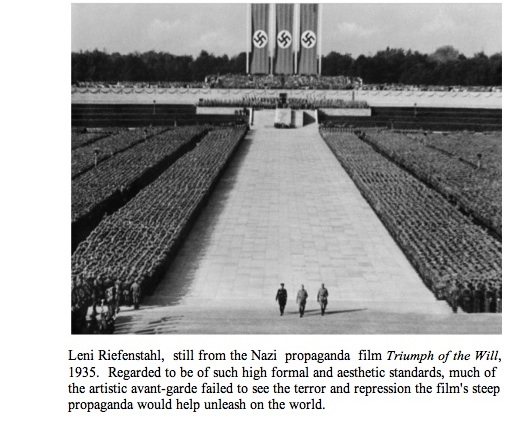 But Wolf is no Sontag in her powers of moral reflection, otherwise she would realize that Bigelow has made torture and other Abu Ghraib humiliations properly tangible for the millions who, prior to her film, held no more than some shadowy image of a detainee swallowing water upon hearing the word 'waterboarding.' In place of inadequate and ineffectual words, Bigelow has burned the imagery of torture into our brains.

This is a good thing. We require such imagery to make moral decisions about torture. The result of Wolf's thoughtlessness is that she has made herself seem all-to-eager to win sympathy for her views by reaching for flaming rhetoric and analogies that, despite their grossly disproportionate comparisons, incense readers to abandon all reason long enough to inflict damage on the undeserving. In another era we would call that lighting the fires of a witch burning. But because so many witches were women who were victims of both ideological and sexual tyranny, we feminists shy away from the analogy. We shouldn't in this case. For just as so many of the witches persecuted in history were innocent of the charges leveled against them, so is Kathryn Bigelow.

The comparison to Leni Riefenstahl's films is heinous and manipulative. Riefenstahl's aesthetic formalism -- the use of low angle shots to elevate the stature of Hitler; the sweeping pans of the assembled Nazi troops saluting their fuehrer -- so awed viewers, and so formidably shaped public opinion, as to delude an entire nation into entrusting their lives and power to a psychopath. Can such an obscene and absurd analogy realistically be thrust on Bigelow for having done no more than allowing each of us to see and decide for ourselves what the U.S. did during the early years of the War on Terror? In contrast to Riefenstahl's orchestrated exaltation inspiring Germans to imagine the glories of a master race, Bigelow existentially films the degradations that scar humankind. Most strategic of all, Bigelow has provided the space for the public dissent against torture now filling the media, the public consciousness, and the halls of Washington in a way that Wolf, and even the formidable Sontag, never could. I ask Ms. Wolf, where is the manipulation here? I saw none in Zero Dark Thirty, but I see plenty of it in your rhetoric.

Above all, Wolf has disrespected the memory of the 9/11 dead and their survivors by offering us, in place of deep reflection, distortions of Bigelow's film that trigger knee-jerk reactions by summoning to mind the iconography of genocide and ineptly grafting it onto a present to which it bares little resemblance -- except ironically to the terrorists and their brand of fascism. In short, Wolf is comparing the death and terror inflicted on tens of millions with the torture that was inflicted on hundreds known or suspected to be plotting untold numbers of deaths by terror. This is not the scale of a fair moral mindedness that Wolf aspires to. It is grandstanding on graves.

I ask all readers to consider that while Riefenstahl hid the terror behind the artifice of aesthetic beauty and a false rationalism, Bigelow displays the terror front and center for us all to see and judge for ourselves. And the attempt to make the two filmmakers seem the same is no more than an exploitative and rhetorical ploy meant to further enflame opponents of the film while reprising for Ms. Wolf some semblance of the esteem that once was legitimately hers.

It might help us to better understand Zero Dark Thirty if we also know that Bigelow was trained as a semiotician -- someone who studies the signs and codes that pictures and films convey about the social codes -- fraternal, sexual, familial, professional, religious, political -- that inform us unconsciously, and determine how we should or shouldn't behave in a given social enclave. What this all means is that Bigelow has a heightened sense of the messages we humans both send to one another and receive unconsciously, about what is and isn't sanctioned by the social environment we enter -- in life and in the art and entertainment representing it.

In her films, the more subtle messages that Bigelow sends to the viewer operate beneath the radar of the story we are engaged with on the screen. What is often called by writers as the subtext of the film. The problem is, that subtext, especially in commercial Hollywood films, for reasons of the film having to connect with a broad audience, is often so discreet, it is received and interpreted by different people in vastly different ways. Hence I receive from Bigelow the intent to reveal to the public the torture covertly legitimized by the CIA and the Bush-Cheney-Rumsfeld chain of command, while Wolf reads the same scenes as an apology for torture.

The important thing to keep in mind about Wolf's rash comparison of Bigelow with Riefenstahl is that Bigelow shows us the codes operating within the enclaves of power. Riefenstahl hid the codes of power beneath a veneer of artifice meant to dazzle the viewer.

SPOILER ALERT: At the end of my screening, I didn't feel dazzled. I didn't see anyone emerging from the theater appearing dazzled. Despite my admiration for Zero Dark Thirty, I personally felt emptied of emotion at its end. So it seems did the audience around me. No doubt one of the reasons is that we mirrored the sentiments of agent Maya (Jessica Chastain) at the end of the film as she flies from Afghanistan back to the U.S. The reading of emotional emptiness in such a scene tells us that the culmination of ten years of Osama bin Laden's pursuit has yielded no joyous gratification -- whether it was for Maya -- and for us cathartically living through her experience -- a mission of revenge or of justice.

How could Bigelow have filmed such an ending if she were an apologist for torture?

To read more by G. Roger Denson about Zero Dark Thirty, the director Kathryn Bigelow and screenwriter Mark Boal, the social and political responsibility of artists, and the controversy over why so few outside the U.S. government bore witness to the remains of Osama bin Laden, see his post, Zero Dark Thirty: Why the Film's Makers Should Be Defended and What Deeper bin Laden Controversy Has Been Stirred.

To read public statements made by the Bush and Obama administrations, CIA and Congressional officials between 2008-2011, see his post, "Zero Dark Thirty Account of Torture Verified by Media Record of Legislators and CIA Officials."