A team of university students is counting down toward the ultimate science ride, a weightless flight aboard a modified NASA jet to see just how certain fires burn in zero gravity.

The experiment, led by engineering undergraduate Sam Avery of the University of California, San Diego, is aimed at testing how biofuels burn in weightless conditions. And with a target flight date of Thursday (July 18), Avery and his crew are getting pumped.

"The team is really excited about this experiment," Avery said just two weeks ahead of takeoff. "We've been working hard to get the equipment ready and tested for the parabolic flights with NASA in a couple of weeks." [6 Everyday Things that Turn Strange in Weightlessness]

Avery and his team are flying with NASA under the space agency's Microgravity University Program, which offers university students the chance to perform experiments under weightless and reduced-gravity conditions using a modified aircraft. The "Vomit Comet" flights, as they've been nicknamed, fly about 30 parabolas, moving up and down like a roller coaster, to produce short periods of weightlessness that are followed by brief stints of "hypergravity" that can reach 2Gs, twice the normal pull of Earth's gravity.

The flights are based at Ellington Field near NASA's Johnson Space Center, which oversees the Microgravity University project. The space center is also home to NASA's astronaut training and Mission Control for the International Space Station.

A computer rendering of the UCSD microgravity fire experiment, after deposition of the fuel droplet.

The UCSD team's biofuels in space project is being conducted under the supervision of UCSD professor Forman Williams. SPACE.com managing editor Tariq Malik will serve as the team's journalist member. After the flight, the results will be written up by the team and submitted to the university and NASA for evaluation.

When asked how his team might best prepare for the ordeal, Avery said: "We might take a few runs on roller coasters or drop towers at theme parks to feel the effect of free-fall."

Before each weightless dive, Avery's team must electronically trigger two small hypodermic needles to inject a droplet of biofuel onto a thin fibrous crosshair that holds the droplet in place until the environment reaches a weightless condition. Then a small spark ignites the drop and twin video cameras record the burning process for later evaluation.

"We have had some great success rates with our ground tests of the fuel ejection and ignition systems, and we have programmed each system so that we can repeat its process multiple times during each parabola," Avery said. "I am 80 percent confident that it will work on the first parabola and 95 percent confident that it will work by the end of the flights."

As it turns out, not all parabolas are created equal. 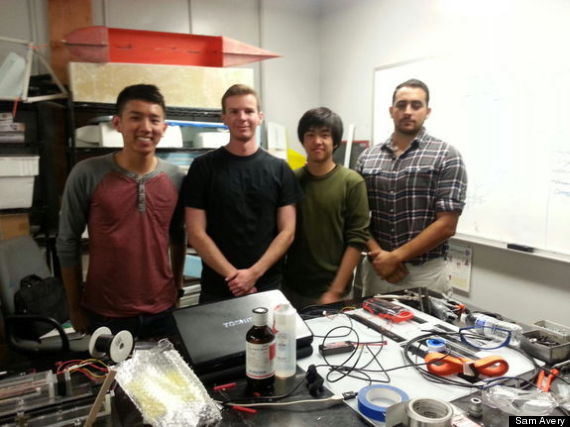 Avery's team also recently completed testing of software they have written that automates the fuel-drop delivery to the crosshairs.

"We recently fixed our code for our automated syringe ejection system so that every time we press a button the syringes will move toward the cross fiber and eject another droplet," he said.

One big hurdle still looms large for the team.

"JSC would like us to do more analysis of our rig to validate our load testing. They will review it at the beginning of the flight week, which is coming up soon," Avery said. "But with most of the team members working full time [over the summer break], it's difficult to get everything to work."

Avery himself is interning for the summer at a San Diego-based company that works on the Orion capsule's abort system. His team is one of 14 different groups flying on NASA's microgravity aircraft between today (July 12) and July 20. The groups include seven student teams flying under the Microgravity University program, as well as seven teacher groups as part of NASA's Teaching from Space program.