I just spent a few weeks in Japan and China on a book tour for the Japanese and Chinese versions of The Startup Owner's Manual. In these series of five posts, I thought I'd share what I learned in China. All the usual caveats apply. I was only in China for a week so this a cursory view. Thanks to Kai-Fu Lee of Innovation Works, David Lin of Microsoft Accelerator, Frank Hawke of the Stanford Center in Beijing, and my publisher China Machine Press. 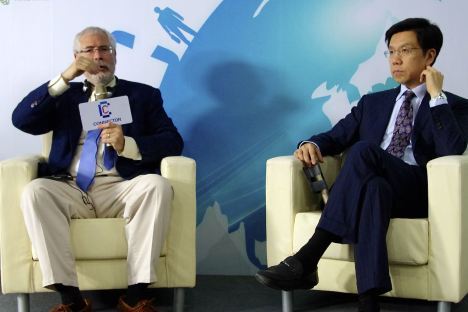 The previous post described the evolution of the Chinese Venture Capital system. The next two posts are about what I saw and learned in my short stay exploring Beijing's entrepreneurial ecosystem.

Entrepreneurship in Beijing
In the few days I was in China I met with several VCs, angel investors, business press and spoke to hundreds of entrepreneurs. I was blown away by what I saw in Beijing. First, I was amazed by the physical impact of the city itself. This was a modern city in a hurry to make a first impression -- think of what Rome looked like in the time of the empire or New York in the 1920s -- now it's Beijing announcing that China has arrived.

However if you scratch the surface, you can still find a bit of the old Beijing in the hutongs. Drive 50 miles outside the city into the surrounding villages and you see the distance China has to travel to bring the rural areas into the 21st century. In Beijing we hadn't seen air so badly polluted since we had been in Agra in India in the winter where I swear there was a day you could wave your hand in front of you and see traces of it in the air (and their excuse was they burn dung for heat.)

David Lin and the Microsoft China Accelerator were gracious enough to host two wonderful days of events for me. I trained the Startup Weekend Next Beijing mentors and instructors, presented to several hundred entrepreneurs, and had a great fireside chat with Zhen Fund founding partner Xu Xiaoping in front of another roomful of entrepreneurs. 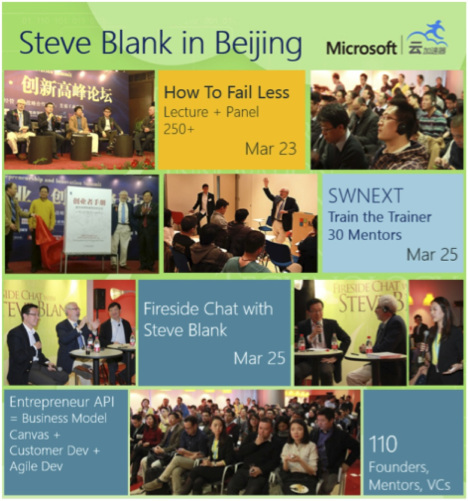 Kai-fu Lee of Innovation Works was equally generous with his time. We had a fireside chat with a room full of eager entrepreneurs. And he was generous in sharing his insights about the current state of entrepreneurship and investment in China. And through it all Louis Yuan my patient and wonderful publisher from China Machine Press kept me moving through the events.

But what made the overwhelming impression for me was finding an entrepreneurial software cluster on par with the Internet software portion of Silicon Valley. The physical heart of the Beijing startups is in Zhongguancun in the Haidian District, located in the northwest side of Beijing. Startups here are primarily in what they call the TMT (Technology, Media and Telecommunications) segment. Not only does Zhongguancun have Chinese startups, but global technology companies (Nokia, Ericsson, Motorola, Sony Ericsson, Microsoft, IBM, Sun, Oracle, BEA, Alcatel Lucent, Google) all have offices here or elsewhere in Beijing.

If there ever was any question about the value of China's Torch Program walk around Zhongguancun. It was the first of the 54 Science and Technology Industrial Parks.

China Venture Capital
An entrepreneurial ecosystem is driven one of two ways; either by a crisis (i.e. innovation in the U.S. during World War II,) or during peacetime by profit.

If it's driven by profit then the ecosystem needs both entrepreneurs as well as Venture Finance.
China now has plenty of both.

China has the biggest venture capital industry outside the U.S. To compare the two, in 2011 U.S. venture capitalists invested $26.5 billion in all deals. Out of that total, they funded 967 Internet deals with $6.7 billion. 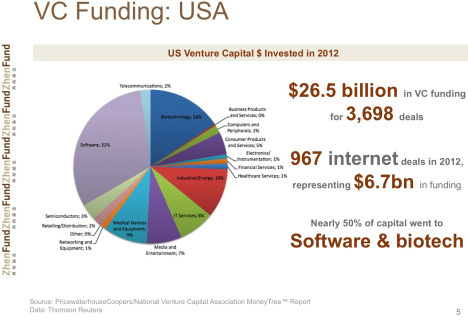 By comparison, in 2011 Chinese VCs invested $13 billion in all deals. Out of that total, they funded 268 Internet deals with $3.2 billion. About one-third of all China's venture capital investment is made in Beijing and the majority of those investments are in the Technology, Media and Telecommunications (TMT) sector I'll describe shortly.

As vibrant as the China venture business has been, 2012 was a different story. VCs pulled back and only invested $3.7 billion in all deals, funding just only 43 deals with $563 million. 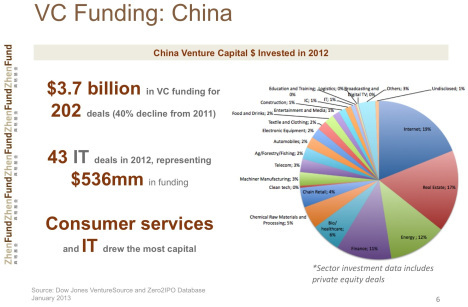 Closed for You, Open For Us
First a bit of context in what the VCs in Beijing are investing in. China has essentially closed its internal search, media and social network software market to foreign companies who wouldn't play with the government rules on the Great Firewall (China blocks "objectionable" website content and monitors everyone's Internet access.)

Google retreated to Hong Kong and Baidu took its place. Facebook was too frightening to Chinese censors, so Renren is the leading social media player. Email? Working professionals/white collar use emails, but most users grew up instant messaging on TenCent's QQ and most are moving to Weixin/WeChat. Twitter? No, it's Sina Weibo, and if you want games with your chat -- TenCent. Amazon and eBay? Nope in China it's Alibaba's Taobao or 360buy.com. If you're outside of China, you never hear about these companies or interact with them because they're geared to serve only Chinese users.

This closed but very large market means that greater than 90% of Chinese software startups focus exclusively on the Chinese market. (The

This has resulted in a completely different consumer software ecosystem than found elsewhere in the world. Given the closed market to U.S. Internet companies, VCs in China have guided startups to execute the "copy to China" model. Thinking, if it worked in the U.S., copying a known model is less risky than trying something new and untested. The problem is that this space is getting really crowded -- from the bottom up as everyone tries the 200th clone -- and from the top down, as the major incumbents try to fill every possible market niche.

The table below maps the type of software in China to their global equivalents in each product category in the Technology, Media and Telecommunications (TMT) sector. 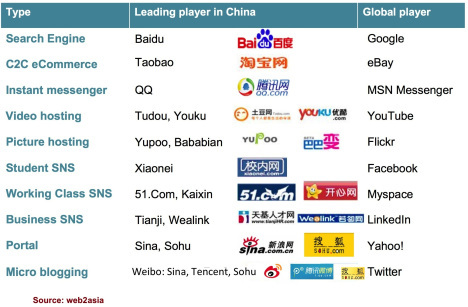 A Huge Market Is Finally Real
For a hundred years the fantasy of global marketers was, " if only everyone in China would buy one..." That day is final here. The numbers of mobile subscribers are staggering -- 1.18 billon, 260 million are 3G. Chinese Internet companies live in a large closed, self-contained ecosystem with 564 million web users with 420 million having mobile web access. 309 million use microblogs and 242 million shop online. (BTW, market research, financial and other statistical information are usually unreliable in China, but even taken with a grain of salt these are staggering numbers.)

The table below from web2asia.com shows the number of users of online social networks as of 2009. Did I mention this is a huge market? 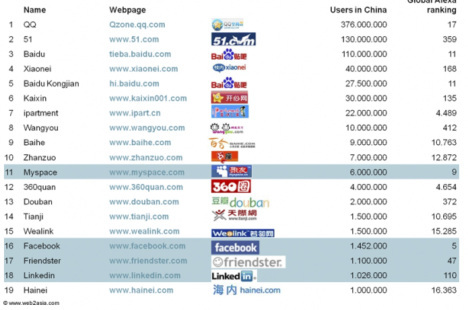 45% of all Venture Capital Investment in China went into the Technology, Media and Telecommunications (TMT) sector.

The number of deals in Technology, Media and Telecommunications more than doubled in 2011 over the previous five years and slowed back down dramatically in 2012. More than 1,600 VC investments in TMT have been made since 2007, with a record high of 436 in 2011. 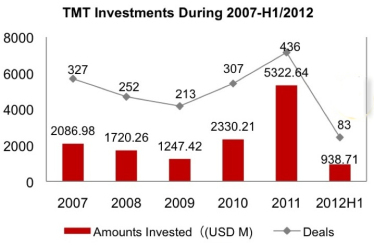 Series-A round investments dominates Technology, Media and Telecommunications (TMT) deals, making up 60% of all. 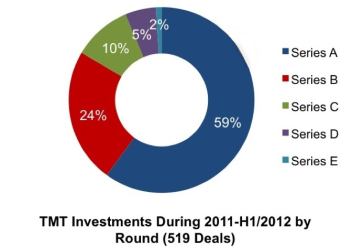 Beijing, Guangdong (including Shenzhen) and Shanghai came out as the most dynamic spots for Technology, Media and Telecommunications (TMT) investments. 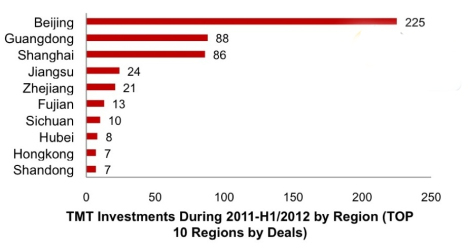 Beijing Venture/Angel Ecosystem
While Beijing has VCs and Angel investors happy to write a check there aren't as many angels/VCs in China versus U.S. per capita. Several VCs mentioned that there's a funding gap for seed stage investments. The Angel/Seed network in Beijing feels fragmented and mostly inexperienced (as are a good number of the China VCs). Kind of reminded me of the drivers in Beijing -- they were all driving in a way that made me think they all just got their drivers license -- until I remembered that they did. Car sales in China went from 1 million in 2001 to 14 million in 2011. 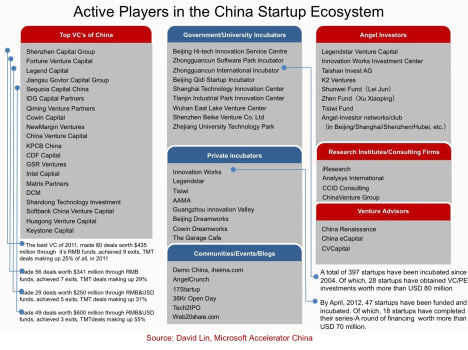 Other Beijing ecosystem issues I heard about were the things we take for granted: the lack of knowledge sharing ("pay it forward" isn't part of the culture,) limited mentoring (few experienced mentors,) and a lack of open source education, and no AngelList model. In the U.S. it's easy to share and browse ideas and deals, but in China there's a long legacy of guarding knowledge as power, and the justifiable paranoia of someone copying your idea prevents sharing.

Liquidity
Unlike the U.S. there are almost no mergers or acquisitions in this market segment. It's much easier to just steal their ideas and hire their employees. So big companies rarely acquire startups. Liquidity for most Internet startups happens via IPO's. 70% of exits in China are via IPO (in the U.S. on NASDAQ or the NYSE or on ChiNext, China's equivalent of NASDAQ) compared to the 90% of exits in U.S. via mergers or acquisitions. Alibaba (commerce), Tencent (games/chat) and Baidu (search) all have market caps over $40 billion.

The next post, the Gold Rush and Fire Extinguishers -- Beijing entrepreneurs, startup culture and some conclusions.