The Port Authority of Allegheny County, Pennsylvania, is changing a longtime slogan on its buses after commuters complained that it spells out a racial slur when read backwards.

The slogan, "Ziggin Zaggin," has been wrapped around nine buses since 2003. No one had a problem with it until a few days ago when a driver noticed the slogan in her rearview mirror and complained to officials, CBS Pittsburgh reports.

It seems that when read backward, "Ziggin Zaggin" looks like "Niggaz Niggiz." Read that way, it could be perceived as racially insensitive, and more than half of bus riders are African-American countywide, according to the Pittsburgh Courier.

After the driver, Tracey Jennings, griped about the backward message to the Port Authority via Facebook, agency spokesman announced the slogans would be removed from the buses immediately.

“Port Authority certainly did not intend for this message to offend anyone,” agency spokesman Jim Ritchie told TribLive.com
“However, due to recent complaints about how this message appears when read backward, we have decided to remove the message from our vehicles. We apologize to anyone who may have been offended.”

The slogans should be removed within the next couple of weeks, but some people feel the Authority is responding to political correctness gone amuck, based on comments on the story found on WPXI's Facebook page.

However, Cynthia Sharkey told CBS Pittsburgh, “It may be an overreaction, but I can see where some people would be offended." 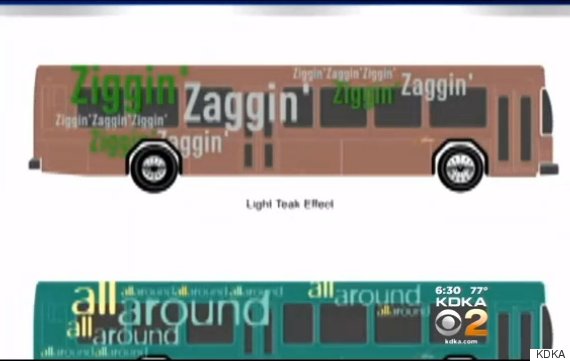