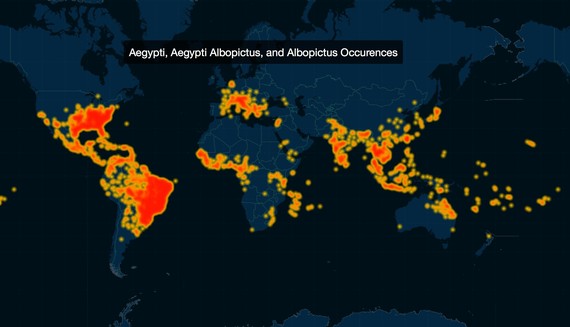 (Image courtesy of The Zika Foundation)

If you have either been unaware of the current Zika epidemic, or thought it was not relevant to you, consider the following: New York University bioethicist Art Caplan recently labeled Brazil as irresponsible with public health by "trying to run an Olympics and battle an epidemic at the same time". He advises Brazil to cancel the Olympics outright in order to limit public exposure to the Zika virus. The impact of Zika on the global consciousness is likely to be felt more immediately with the Miami Marlin's and Pittsburgh Pirates notification that they are poised to cancel an upcoming two-game series in Puerto Rico.

The Zika virus is not only spread by two species of mosquitos (the tropical Aedes aegypti and more cold-tolerant Aedes albopictus), but also transmitted by recently infected males during unprotected sexual contact. Pregnant women infected with Zika have an extraordinary increase in abnormal pregnancies, spontaneous abortions, and inter-uterine growth retardation. Congenital defects occur in as much as 28% of newborns. Babies born to mothers infected with Zika virus during pregnancy have a diverse range of disabilities including microcephaly (proportionally small heads), skeletal malformations, blindness and impaired cognitive development. For post-infection patients, Zika also can cause a disastrous auto-immune disorder known as Guillain-Barre syndrome or "GBS". Guillian-Barre Syndrome is known to cause a range of symptoms from mild tingling of fingers or general weakness of the body, to stumbling gait or paralysis requiring mechanical ventilation. Doctors working in Brazil report that the intensive care facilities are filling up with patients that have survived Zika only to be disabled by Guillllian-Barre Syndrome. Recently, experts working in Puerto Rico shared new data that indicated that approximately 1% of patients infected with Zika who developed symptoms go on to have GBS. These patients require expensive intensive care. Dr. Michael Callahan, a Harvard physician, who specializes in catastrophic infectious disease outbreaks such as Ebola and Bird Flu, is helping 6 nations and 3 U.S. states prepare hospitals to treat large numbers of paralyzed GBS patients. Dr. Callahan reported in an emergency international meeting last week, that global response is repeating the 2014 mistakes of Ebola: "We are too slow, too disorganized, and soon, too late".

The consequences of not addressing this mosquito transmitted virus immediately are serious. In the parts of the world (Latin America, the Americas and southern part of the United States) where abortion is a lighting rod issue, is exactly where this virus is becoming an epidemic. Nearly thirty percent of the pregnant women infected with Zika will give birth to babies with congenital defects. Households will have to abandon regular employment to care of disabled children full-time, thus perpetuating the cycle of poverty in these countries. Zika is a subject that is going to intensify many debates concerning women's rights and freedoms, including the issue of safe conception. The diabolical nature of Zika is that only one out of four people infected by Zika experiences symptoms; a woman can pass Zika to her fetus without ever suspecting the risk she is incurring.

While the danger of the Zika virus has been recognized in Brazil and throughout Latin America, this threat is just beginning to be understood in the US. Public health officials are concerned that political infighting in Washington will significantly delay the start of accelerated drug and vaccine development, a process that routinely takes 7 to 14 years. To date the Obama Administration has been unable to get Congress to agree to commit the $1.7 billion originally appropriated to fight the ebola virus. The New York Times reports that Senator Bill Nelson of Florida recently referred to Zika as "an emergency". As for Republicans, Mr. Nelson said, "they are not treating it like one". Senator Nelson represents Florida - one of the states (along with the entire southeastern United States and southern California) where the Aedes mosquito that transmits Zika is already widespread. On April 27, 2016 a new risk map was released by the Centers for Disease Control (CDC) showing that the mosquito could spread as far as Philadelphia this summer. As Senator Rubio highlighted in his recent speech before Senate - it is not "if" it's "when" the Zika gets to the US. He urged government officials, regardless of their political affiliation, to view Zika with urgency appropriate to the scale of this global threat.

It is critical not only that the US Congress allocates the necessary resources to control the Aedes mosquito, which would also prevent other Aedes transmitted diseases dengue, chikungunya as well as Zika, but also expedites funding for accelerated drug and vaccine development. Unfortunately, current progress indicates few interventions will be in place before the peak mosquito season of June to September. The economic and social consequences of an epidemic of Zika are clearly staggering. Summer is almost here. Zika comes with summer.