An African virus that historically rarely infected people is spreading in the Americas, apparently causing the babies of infected mothers to be born with deformed heads. The Zika virus is carried by mosquitoes and spreads when the insects bite. And though it appeared in the Americas just nine months ago in the Easter Islands off Chile, the World Health Organization said it will soon spread to almost all countries in the Americas, including to the United States.

In 2014, Brazilian health officials reported 147 cases of babies born with shrunken skulls: it was microcephaly, a congenital deformation of the skull that compresses the infants' brains. In 2015, the number jumped to nearly 4,000 microcephaly cases reported in the country.

The correlation between the 2015 explosion in microcephaly cases in Brazil and 19 other countries in the Americas and the spread of the Zika virus is so strong that many public health leaders accept the hypothesis that maternal infection with the mosquito-carried virus during pregnancy causes the skull deformations. Zika virus genetic material has been found in the amniotic fluids of mothers delivering microcephaly babies, and autopsies of two babies that died of the ailment discovered Zika viruses in their brains. 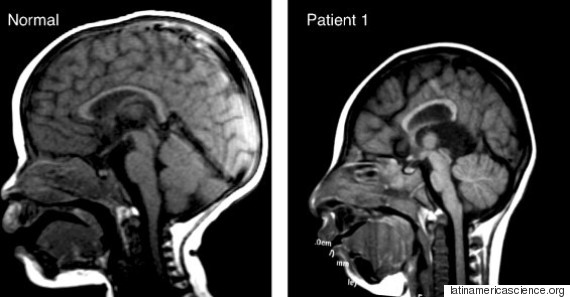 This X-ray picture from Colombia compares the skulls of a normal baby to "Patient 1," born to a mother who was infected with the Zika virus during pregnancy. (latinamericascience.org)

Though the Zika virus has recently appeared in the U.S., no cases were acquired in the country and no infected mosquitoes have been found in the 50 states. But the infected insects lurk nearby: locally acquired Zika cases have emerged in Puerto Rico and Mexico.

A growing number of European countries have also reported Zika infections among travelers returning from Central and South America. The United Kingdom has reportedly identified three new cases; Spain, two; and Portugal, four. In Colombia, at least 13,500 Zika cases have been identified. Far to the north, Puerto Rico has found 19 cases on the island.

There is little immediate concern that the virus will spread across the U.S. because mosquitoes are dormant during winter, and this year's winter weather has been harsh, even in the southernmost parts of the continental U.S. However, as temperatures rise and spring rains create potential breeding sites, there is genuine cause for concern.

This CDC map demonstrates why the agency is fretting about Zika (and chikungunya and dengue) -- both Aedes mosquito species are in the U.S., especially across the South. (CDC)

Other than the spread from mother to fetus in utero and two sexually transmitted cases via contaminated semen, there is no evidence of person-to-person transmission of the Zika virus. To be infected, a person must have been bitten by a feeding mosquito or hypothetically, receive a contaminated blood transfusion. Once infected, the individual's immune system determines whether the illness is so mild as to go unnoticed or more severe.

There is no vaccine or treatment for Zika, and the skull malformations in infected babies cannot be reversed. Nevertheless, most Zika fever cases are mild enough to be confused with the flu or a bad cold and rarely merit hospitalization. In countries such as Brazil, where the other rapidly spreading mosquito-carried viruses -- dengue and chikungunya -- are found, the flu-like symptoms are so similar that blood tests are needed to distinguish the causes. All of these pathogens cause headaches, fevers, joint aches, malaise, weakness and nausea in milder cases.

In very rare cases, Zika can cause the neurological disorder known as Guillain-Barré syndrome, which can be permanently debilitating. In addition to rising microcephaly rates in Brazil, Colombia and at least a dozen other countries in the hemisphere, there are new reports of rising numbers of Guillain-Barré syndrome cases. Both Zika and chikungunya can cause the syndrome. 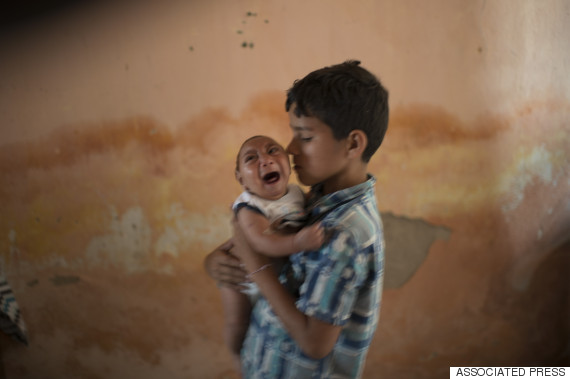 In 1978, a handful of Zika cases were identified in Indonesia, but the disease seemed to disappear without any public health intervention. The first serious outbreak of Zika outside of Africa occurred in April 2007 on Yap Island, part of Micronesia, eventually spreading to neighboring islands of the nation.

Since the Yap outbreak, Zika has emerged eastward across the Pacific in the Cook Islands, Tahiti and, last year, the Easter Islands off Chile. Until 2015, Zika had never been seen in the Americas. For unknown biological reasons, Zika appears to follow the emergence of chikungunya, which in turn follows a new spread of dengue.

In the unfortunate case of the Americas in 2015-16, a perfect storm of biological events has unfolded -- any one of which by itself would have been relatively harmless. These events include the introduction of Asian and African mosquitoes, the spread of yellow fever and then dengue, followed by chikungunya and now Zika; the El Niño climate event; and a Brazilian crisis in both economics and politics. Combined, these have fueled an explosive spread of the disease, and at least 20 countries have severe enough outbreaks to warrant public health emergencies and travel advisories from the CDC. 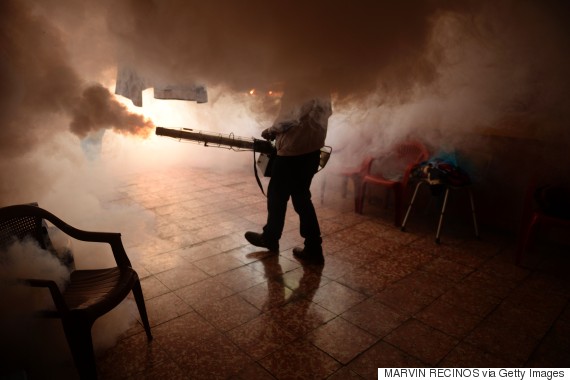 A specialist fumigates a home against the aegypti to prevent spreading of the Zika virus in Soyapango, near San Salvador, on Jan. 21, 2016. (MARVIN RECINOS/AFP/Getty Images)

Researchers from the U.S. National Institutes of Health, David Morens and Anthony Fauci, warn that another, highly aggressive mosquito, Aedes albopictus, also known as the Asian tiger mosquito, is found all over the Americas today. Were the tiger mosquito to take up the Zika virus, as aegypti did, the spread of the disease could reach far greater proportions.

In the absence of vaccines or treatments for the three diseases, public health officials are taking drastic steps to slow the epidemics. The CDC this week issued a warning to American women of childbearing age, suggesting they not travel to countries that have Zika. The Brazilian government has warned women to avoid getting pregnant until the outbreak is controlled.

Perhaps the most extreme government action comes from El Salvador, which strongly advises women to delay pregnancy until 2018 due to Zika risks. Since 1998, it has been illegal to obtain an abortion in El Salvador, even in cases of rape, incest and danger to the mother's life, prompting women's health advocates to insist the law be revoked in cases of Zika infection. Under El Salvador's laws, women are imprisoned for two to eight years if they undergo an abortion, terminated pregnancies are investigated for possible murder prosecution and health professionals that perform abortions face eight to 12 years of imprisonment. 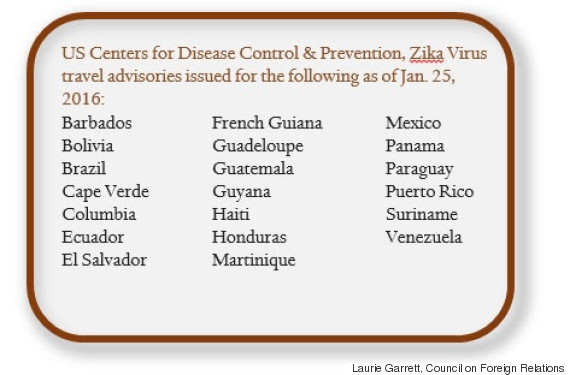 These are the countries that the CDC has advised people not to travel to because of the Zika virus. (Laurie Garrett/Council on Foreign Relations)

For Brazil, the Zika crisis comes as the country is spiraling into economic and political disorder, the president faces threatened impeachment and the nation hopes to impress the world as host of the 2016 Olympics in Rio. Desperate times call for desperate measures: the government is now considering the release of genetically modified aegypti mosquitoes that die before reaching adult stage.

It is summertime in Brazil, with Carnival season not far off. Perhaps the country's greatest hope is that the chill of winter in June will drive the mosquitoes into dormancy during the July Olympics. The Brazilian government is concerned that the billions of dollars worth of tourism expected for the Olympics will be erased by a global Zika panic.

Some three million travel agencies worldwide have received letters from Rio, promising that there would be no Zika threat during the games, thanks to aggressive mosquito control efforts. And the Ministry of Sports issued a memo that noted the Olympics commence on Aug. 5, in the middle of Brazil's winter when the mosquitoes are rarely seen and when "only a minor incidence of cases of dengue" is found nationwide.

This map shows the countries with past or current evidence of Zika virus transmission as of December 2015. (CDC)

Brazil's premiere scientific research agency, Fiocruz, has done pivotal work in their laboratories that is guiding the government's response to Zika. On Jan. 16, for example, Fiocruz announced development of a rapid diagnostic test that can discriminate between dengue, chikungunya and Zika, greatly reducing confusion.

The Brazilian lab also developed two tools -- one genetic, the other based on antibodies -- that allow researchers to find the Zika virus in blood and tissues. With these new methods, the lab found Zika in the semen of two infected men, suggesting the virus might be sexually transmitted, and in the wombs of pregnant women who gave birth to babies with microcephaly -- and in the skulls of those babies.

Inspectors have scoured 7.4 million homes in search of urban breeding sites for the mosquitoes. On top on that, on Tuesday, Brazil's Minister of Health Marcelo Castro announced that 220,000 soldiers from the Brazilian Armed Forces were deployed across the country in search of mosquito breeding sites. But Castro offered little hope for the nation, warning that, "The [Aeds aegypti] mosquito has been here in Brazil for three decades, and we are badly losing the battle against the mosquito." 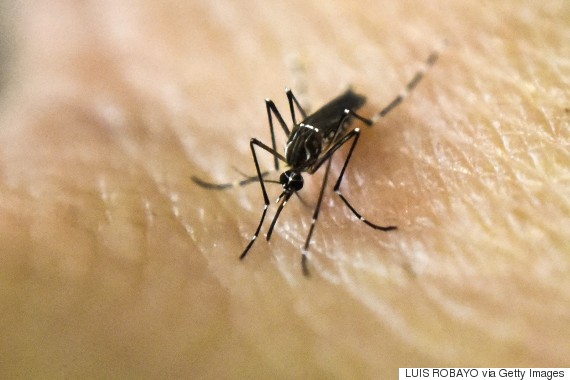 An Aedes aegypti mosquito is photographed on human skin in a lab on Monday, in Cali, Colombia. (LUIS ROBAYO/AFP/Getty Images)

The final word goes to Morens and Fauci:

In our human-dominated world, urban crowding, constant international travel and other human behaviors combined with human-caused microperturbations in ecologic balance can cause innumerable slumbering infectious agents to emerge unexpectedly. In response, we clearly need to up our game with broad and integrated research that expands understanding of the complex ecosystems in which agents of future pandemics are aggressively evolving. 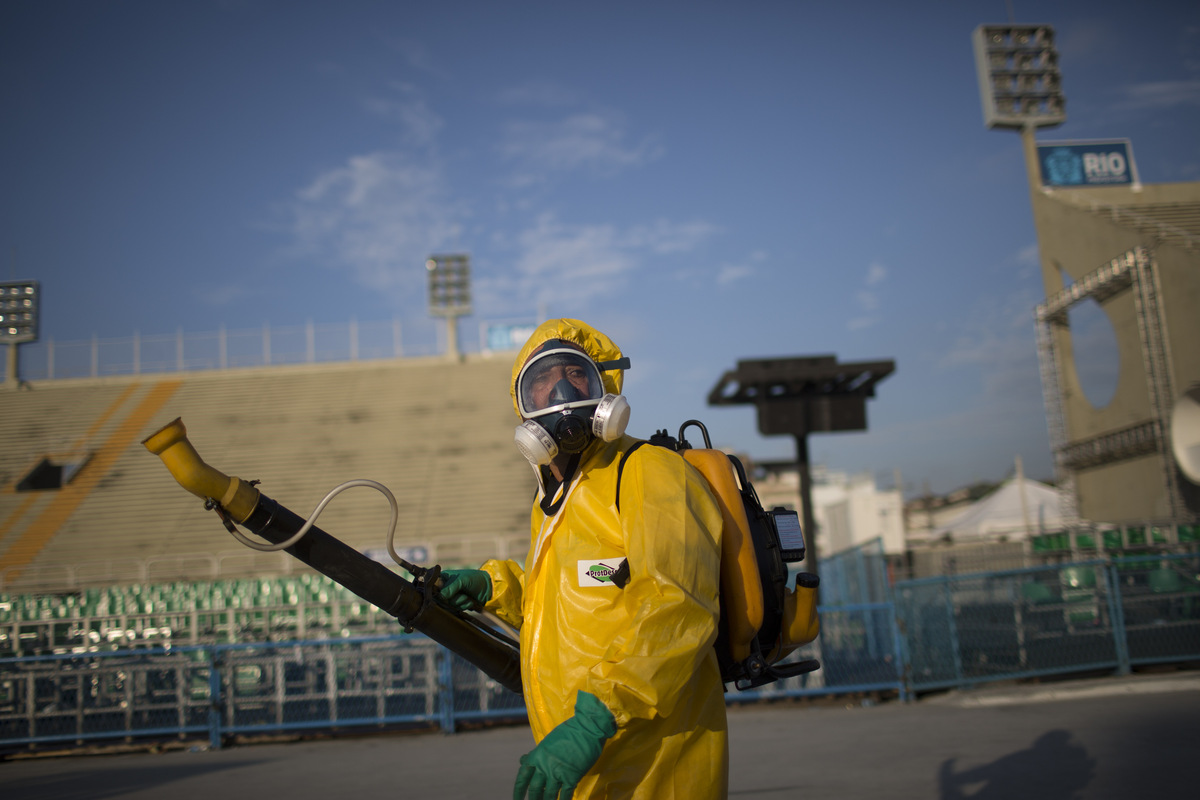