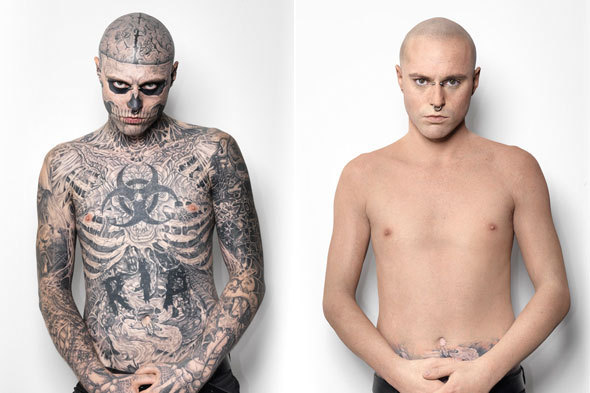 Zombie Boy Rick Genest, before and after, using Dermablend concealers.

Finding the perfect concealer can be quite daunting, but you may want to give Dermablend a try after witnessing this amazing makeover.

A team of three makeup artists worked in just one day using about 4 tubes of Dermablend Professional Leg and Body Tattoo Primer and Leg and Body Cover to conceal Genest's skeletal tattoos from the waist up. In the jaw-dropping, three-minute clip, we see the final result.

"I think I'm going to get a job now," Genest jokes as he looks into the mirror.

What do you think about Zombie Boy's massive cover-up? Does his transformation convince you to pick up Dermablend's products?

Tell us your thoughts in the comments section and check out this glow-in-the-dark Halloween makeup.

In related news, Genest sported a suit and pearls in a recent fashion campaign.