With near-constant signs that the end is near, it's oddly comforting to envision a tattered world in which the only thing that matters is the Zombie Apocalypse.

That's the backdrop for the new undead-inspired fragrances from Demeter. Zombie For Him and Her are designed to help the living fly under the radar of their reanimated enemies (and friends, let's be honest, you will have some annoying zombie pals). Fans of "Walking Dead" will no doubt recognize this tried-and-true strategy to avoid getting your brain eaten.

A press release from Demeter claims the product is "eminently wearable." That statement is, to put it charitably, untrue.

Zombie For Him smells a lot like the volcano exhibit at the New Mexico Museum of Natural History and Science.

For the incredibly high percentage of readers who find that description useless and obnoxious, let's let Demeter explain what the company thinks of its pungent product:

"Think forest floor. Zombie for Him is a combination of dried leaves, mushrooms, mildew, moss and earth."

Nevertheless, we're telling you, it smells just like the volcano exhibit.

Zombie for Her smells like grass, but not fresh smelling grass. It's more like the lawn clippings that have been sitting in trash bags for weeks because nobody wants to lug those things to the curb to be picked up. Demeter says there's also "dregs from the bottom of the wine barrel for a feminine touch."

What makes us most wary of the zombie fragrances is they may not actually fulfill their primary goal of saving people from death by getting eaten.

Just look at the photos below. Zombies LOVE this stuff, almost as much as that goofus who's about to be consumed.

PHOTO GALLERY
Zombie For Him
Download
Calling all HuffPost superfans!
Sign up for membership to become a founding member and help shape HuffPost's next chapter
Join HuffPost

Zombie Fragrance Kills The Ladies (PHOTOS)
Zombie For Him 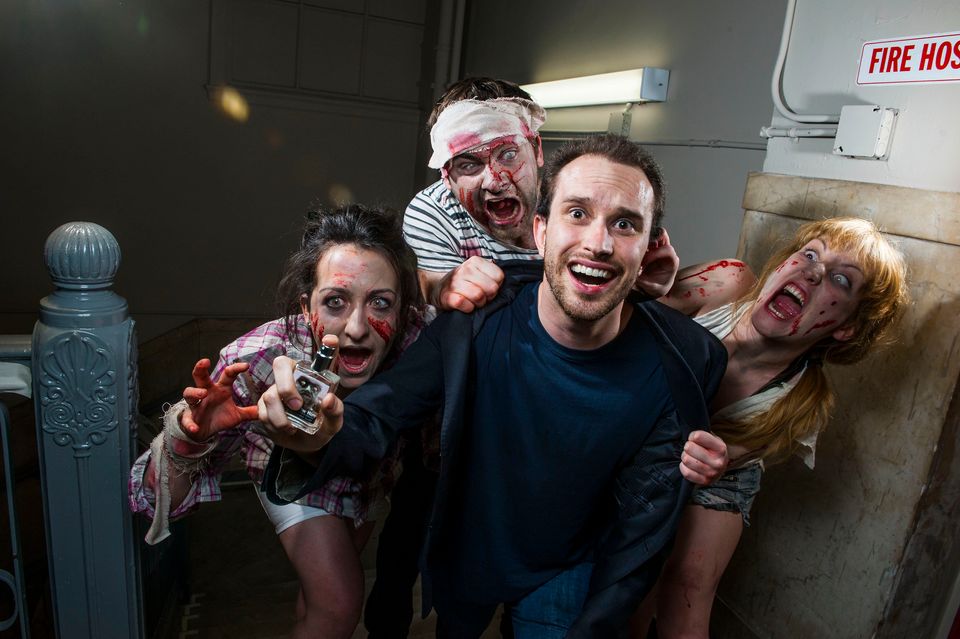