The unbalanced orbit of a so-called "zombie planet" in a dusty star system has astronomers struggling to explain the exoplanet's behavior.

New observations of the planet Fomalhaut b by the Hubble Space Telescope revealed the oddball orbit, which has wild extremes between its closest and farthest points from the parent star and appears to cross through a vast minefield of dusty debris.

"We are shocked. This is not what we expected," said study leader Paul Kalas, an astronomer with the University of California at Berkeley and the SETI Institute in Mountain View, Calif., in a statement Tuesday (Jan. 8).

Fomalhaut b is a giant alien planet that is nearly three times the mass of Jupiter. It was the first alien planet ever directly imaged in visible light. The planet orbits the dust-shrouded star Fomalhaut and is located about 25 light-years away in the constellation Piscis Austrinus.

In October, scientists dubbed the world a "zombie planet" because it appeared to rise from the academic grave. After first being discovered in 2008, subsequent studies suggested the planet was nothing more than a huge dust cloud. In 2012, astronomers resurrected Fomalhaut b's planet status when new observations proved there was a planetary object embedded in a free-floating dust cloud. [Gallery: The Strangest Alien Planets] 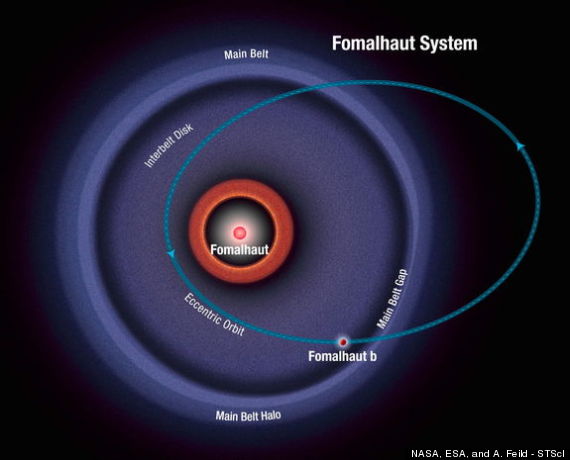 This diagram shows the orbit of the exoplanet Fomalhaut b as calculated from recent Hubble Space Telescope observations. The planet follows a highly elliptical orbit that carries it across a wide belt of debris encircling the bright star Fomalhaut.

The latest observations of the odd planetary system revealed that the dusty debris disk surrounding the star Fomalhaut is much wider than previously thought. The debris belt spans a vast region of space between 14 billion and 20 billion miles (22.5 billion to 32.1 billion kilometers) around the star.

Stranger still: The planet Fomalhaut b appears to approach with 4.6 billion miles (7.4 billion km) of its star at the closest point in its orbit, then swing way out to a point about 27 billion miles (43.4 billion km) away at the farthest point. Scientists call the extremes of such a planet’s path a highly eccentric orbit.

Fomalhaut b's path, scientists say, sends the planet crashing through the surrounding debris disk during its 2,000-year orbit around its parent star. The research was unveiled Tuesday at the 221st meeting of the American Astronomical Society in Long Beach, Calif.

A hidden planet around Fomalhaut?

Among the several theories to explain Fomalhaut b's extreme orbit is the possibility that the exoplanet had an encounter with another planet, a yet-to-be discovered neighbor. The cosmic close encounter could have gravitationally ejected Fomalhaut b into its current orbit, scientists said.

"Hot Jupiters get tossed through scattering events, where one planet goes in and one gets thrown out," study co-investigator Mark Clampin, of NASA's Goddard Space Flight Center in Greenbelt, Md., said in a statement.  "This could be the planet that gets thrown out." 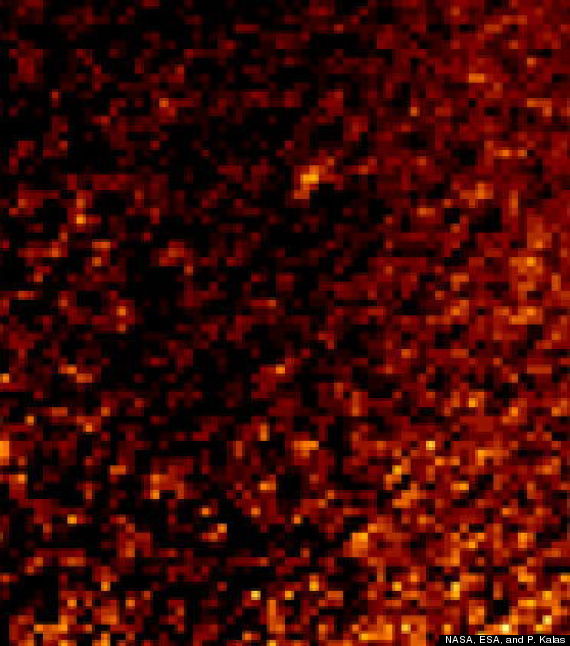 Hubble telescope images revealed an apparent gap in the dust and ice debris around Fomalhaut, a region that could have been swept clean by the presence of the undetected planet, researchers said.

Another theory suggests that Fomalhaut b could have once had a small dwarf planet as a neighbor, but that the giant planet obliterated the smaller world in a catastrophic collision. Such a crash could explain why the star Fomalhaut has a narrow outer debris disk that is less than 10,000 years old, scientists said.

Does Fomalhaut b have rings?

Another tantalizing theory suggests Fomalhaut b may have Saturn-like rings and be destined for a spectacular crash through the debris disk around the star Fomalhaut in the year 2032. [Photos of Saturn’s Glorious Rings]

A set of rings or a nearby shroud of dust and ice could explain why Fomalhaut b appears so bright in visible light images, but is relatively dim in infrared light, according to Kalas. The rings or dust around the planet would reflect starlight, making the planet bright. A dust cloud could be created impacts on moons around Fomalhaut b, if they exist, researchers said.

In 2032, astronomers expect to solve one riddle that has perplexed scientists since Fomalhaut b's discovery: Is the exoplanet in the plane of the debris disk around its star, or not?

If the planet is on the same plane as the debris disk, than it will be bombarded by dust and ice in 2032 when it crosses through the disk during the outbound leg of its orbit, researchers said. That would make the planet increase its brightness in infrared light, they added. Impacts from the debris could create a celestial light show on the planet similar to that seen on Jupiter when the comet Shoemaker-Levy 9 battered the gas giant in 1994.

If Fomalhaut b is not in the same plane as the debris disk, then it should gradually get dimmer as it gets farther and farther from its parent star, researchers said. One way or another, the clues should come out starting in 2032, scientists said.

Hubble telescope officials said astronomers plan to continue to monitor the Fomalhaut star system over the next few years and decades to see how the star system changes over time.