TBILISI, Georgia (AP) — Tigers, lions, a hippopotamus and other animals have escaped from the zoo in Georgia's capital after heavy flooding destroyed their enclosures, prompting authorities to warn residents in Tbilisi to say inside Sunday. At least 10 people have been killed in the disaster, including three zoo workers.

An escaped hippo was cornered in one of the city's main squares and subdued with a tranquilizer gun, the zoo said. Some other animals also have been seized, but it remained unclear how many are on the loose. Bears and wolves are also among the animals who fled from their enclosures amid the flooding from heavy rains and high winds.

There were no immediate reports that any of the fatalities were due to animal attacks. The zoo said one of the dead was Guliko Chitadze, a zookeeper who lost an arm in an attack by a tiger last month.

Heavy rains and wind hit Tbilisi during the night, turning a normally small stream that runs through the hilly city into a surging river. The flooding also damaged dozens of houses. 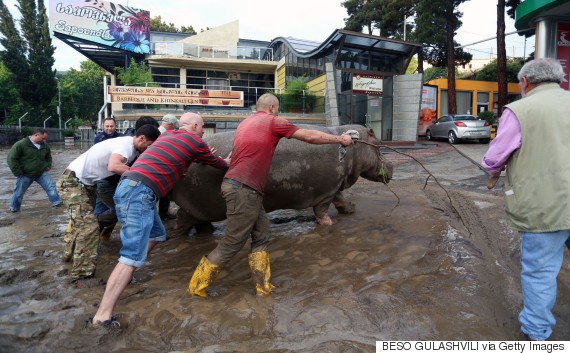 Local residents push a hippopotamus along a flooded street in Tbilisi on June 14, 2015. (BESO GULASHVILI/AFP/Getty Images)

City mayor David Narmania told journalists that 10 people were known to have died; 10 others were reported missing.

Helicopters are circling the city and residents have been told to stay indoors except in an emergency. About 1.1 million people live in the former Soviet republic's capital.

The head of the Georgian Orthodox Church, Patriarch Ilia II, was quoted by the Interfax news agency as telling a Sunday Mass that Georgia's former Communist rulers could be seen as involved in the disaster.

"When Communists came to us in this country, they ordered that all crosses and bells of the churches be melted down and the money used to build the zoo," he said. "The sin will not go without punishment. I am very sorry that Georgians fell so that a zoo was built at the expense of destroyed churches." 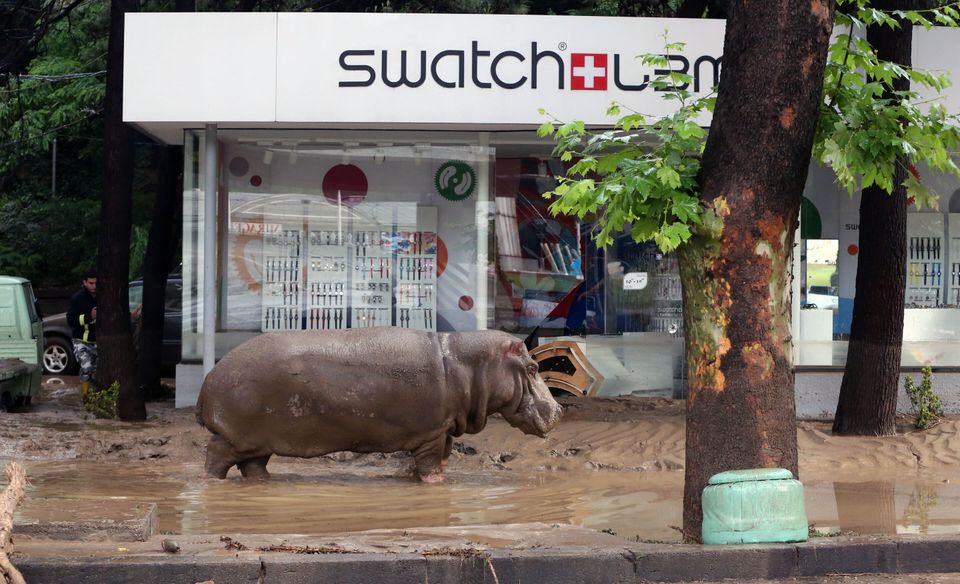 1 / 14
A hippopotamus stands in the mud in front of a Swatch watch kiosk after it escaped from a flooded zoo in Tbilisi, Georgia, Sunday, June 14, 2015. (AP Photo/Beso Gulashvili)
ASSOCIATED PRESS