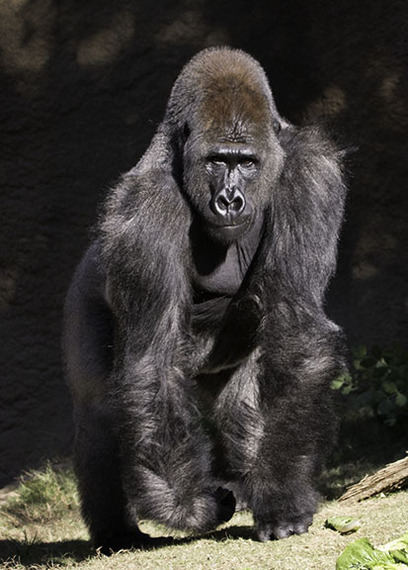 style="float: left; margin:10px"My blogs are normally about dogs. As an animal lover, however, I am so angered and saddened by a recent incident at the Cincinnati Zoo that I can't help but speak out. Piecing together various accounts, here's what happened: A 4-year-old boy crawled through a barrier and fell into a gorilla enclosure. Zookeepers quickly moved the 2 female gorillas into another area, but the 17-year old male gorilla was still inside. An eyewitness reported that the gorilla "rushed toward the boy and led him by the arm through the water in the enclosure," and that he, "seemed protective and only alarmed by all the screaming." The boy was in the enclosure for 10 minutes with no injuries. The zoo president says, "while Harambe didn't attack the child, the animal's size and strength posed a great danger." The zoo's Dangerous Animal Response team felt a tranquilizer would have taken too long to take effect and so, with the boy between the gorilla's legs, they shot Harambe dead. The boy was taken to a hospital where he was determined to have sustained non-life-threatening but serious injuries.

How did this happen in the first place? To reach the gorillas, the boy had to go under the safety rail, crawl through wires, and climb over the moat wall. According to one eyewitness, the boy's mother was "tending to several other children" when he slipped away. Unfortunately, this is far from the first time this type of thing has happened. In 2014, a 3-year-old boy at the Little Rock Zoo "fell into" the big cat exhibit after his grandfather put him up on the railing to see the cats. A zookeeper reported seeing a yellow jaguar with its jaws around the neck of the boy. In this case, the staff used a fire extinguisher to drive the cat back, lower a ladder, and rescue the boy. The boy was treated for non-life-threatening injuries. Need more? Last year at the Cleveland Metroparks Zoo, a 2-year old boy fell into a cheetah exhibit. The boy's mother was "holding him and another child" over the railing when he fell in. Fortunately, they were able to get the boy out and the cheetah seemed more curious than anything.

There have been many similar incidents at zoos over the years. I'm not a parent (unless you count my fur-kids), and I'm sure it's difficult to keep an eye on your child 24/7. But in each of these cases, had a parent been supervising, not to mention not doing anything incredibly stupid like standing the child up on a railing or other precarious spot, these incidents would never have occurred. I spend time photographing zoo animals, and almost every time I visit I see exactly this kind of insanity.

Regardless of how you feel about whether zoos should exist, they do, and a large part of their income comes from families with children. Instead of blaming parents or zookeepers, what about coming up with a solution? Here's mine, and it has two parts: First, any family with a child that is seen up on a railing or other precarious area must be escorted out of the zoo immediately. Highly visible signage around the zoo should warn them this will happen. Second, there are harness/leash combinations that are specifically designed for children. Children of a certain age and below should be required to wear one while on zoo grounds. This would prevent this sort of tragedy from ever happening again. It would also prevent children from running into other visitors (something I have experienced quite often) and from getting lost.

The death of Harambe, a western lowland gorilla -- a critically endangered species -- could have easily been prevented. So could many other similar incidents. Let's learn from this heartbreaking tragedy and change things so it can't happen again.