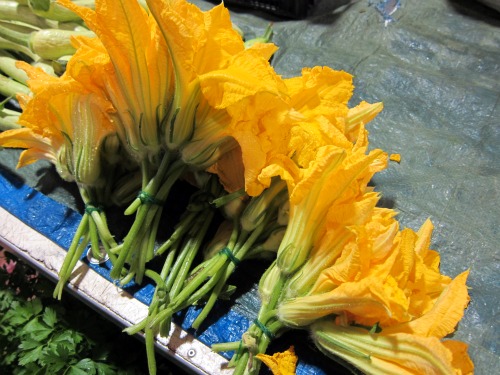 When I was in second grade, we had to make elevation-accurate plaster of Paris molds of our favorite continents. I built, surprise, surprise, Europe, talking particular care of the Gallic region. Sometime when I was attempting the Alps, this girl in my class, Christina, dipped a spoon into the plaster of Paris, and stuck the spoon in her mouth. The teacher was apoplectic--nurses and poison control were called. But when I asked Christina about it later, she just said to me, "What? It was just like tuna salad."

I love those moments where you go from thinking something is totally and completely inedible, to realizing that it is another delicious thing you can stick in your mouth.

I've had a few of these revelations. Stinky cheese rinds (I used to think they were indigestible) to escargots (self-explanatory). But none made me happier than the first time I ate zucchini blossoms. They are like pale marigolds in color, like lilies in shape. They sprout out like giant and wildly inappropriate headdresses on the end of young zucchini. They're not easy to come by in the States, but in Europe, where I am right now, they sell bunches of ten for a Euro. They can't get rid of them fast enough. And I'm happy to oblige.

I'm recreating a Niçoise classic: zucchini flower beignets. Every time I go to my favorite zucchini flower beignet vendor (yes, I have one) in Nice, they are sold out. But the blossoms themselves are everywhere, and necessity is the mother of invention. I whisked up a quick batter of water, egg, baking soda, and flour, and fried the flower fritters in olive oil, for Provençal flavor. They puff up, and turn crisp on the outside, and slightly doughy within. Traditionally, they are served with wedges of lemon, and salt. Which is how I serve mine--and how you should consider serving yours. The flowers add surprising meatiness, and a mellow almost-background flavor that tastes like nothing else. Not like zucchini, and not like flowers. Not like plaster of Paris or tuna salad either. But rather like a fresh bite of a summer garden. Hard to put into words, but not hard to put into your mouth. They're delicious. 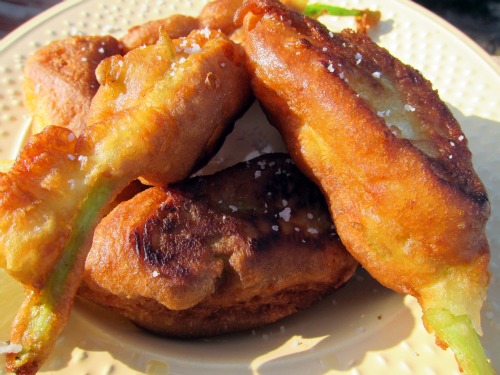 Heat about 2 inches of oil in a saucepot over medium-high heat. The oil will be hot enough when you dip the end of a wooden spoon in the oil, and bubbles rise up.

Meanwhile, whisk together the egg, flour, water, and baking soda, along with a good pinch of salt. Dredge the flowers in the batter, and fry about 2 at a time (careful not to overcrowd the pan), turning once, until puffed and golden and cooked through: about 2 to 3 minutes. Remove to a plate lined with paper towel, and salt the beignet. Repeat with all the flowers, and serve immediately with cut lemon wedges.

1. You can either dip the flowers whole in the batter, or split them up one side, open them like a book, and then dunk them, for a broader beignet.