Mark Zuckerberg wants President Obama to stop the U.S. government from spying on his users, and in doing so he's totally willing to ignore that his company's own ad plan is based around doing some peeping of its own.

The Facebook chief penned an angry open letter on Thursday about the president's slow response to reforming the National Security Agency. In it, he complained that the massive online spying program is sowing distrust among Facebook's 1.2 billion members.

"I've called President Obama to express my frustration over the damage the government is creating for all of our future," Zuckerberg, who apparently has the president's phone number, wrote on Thursday. "Unfortunately, it seems like it will take a very long time for true full reform."

Here's the letter, which we've also quoted in its entirety at the end of this post:

Of course, Facebook's own history of privacy problems suggests it is perfectly able to erode people's trust all on its own. Throughout its existence, privacy advocates have lashed out against the giant social network for using unsuspecting people's information for its own financial gain -- namely, serving up targeted ads based on users' expressed interests.

In fact, you can see such targeted ads just to the right of Zuckerberg's letter: 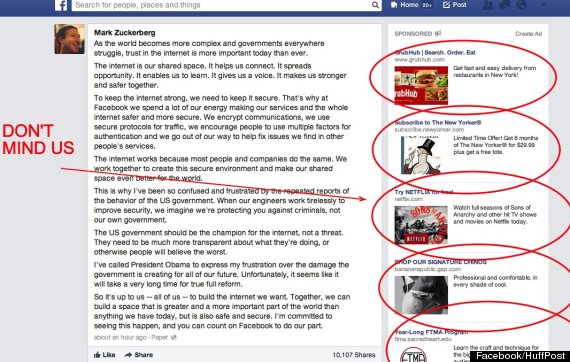 Since the NSA revelations last summer, Zuckerberg has used his public speaking engagements to rail against the agency. "I think the government blew it," he told fellow Silicon Valley techies last September. He again said the government "blew it" during Facebook's latest earnings call in February.

The social media site was one of many Internet companies that were implicated in the revealed documents to be giving the NSA direct access to its servers, a charge which executives in Silicon Valley have vehemently denied.

Here's the entire note if the Facebook embed above doesn't work for you:

As the world becomes more complex and governments everywhere struggle, trust in the internet is more important today than ever.

The internet is our shared space. It helps us connect. It spreads opportunity. It enables us to learn. It gives us a voice. It makes us stronger and safer together.

To keep the internet strong, we need to keep it secure. That's why at Facebook we spend a lot of our energy making our services and the whole internet safer and more secure. We encrypt communications, we use secure protocols for traffic, we encourage people to use multiple factors for authentication and we go out of our way to help fix issues we find in other people's services.

The internet works because most people and companies do the same. We work together to create this secure environment and make our shared space even better for the world.

This is why I've been so confused and frustrated by the repeated reports of the behavior of the US government. When our engineers work tirelessly to improve security, we imagine we're protecting you against criminals, not our own government.

The US government should be the champion for the internet, not a threat. They need to be much more transparent about what they're doing, or otherwise people will believe the worst.

I've called President Obama to express my frustration over the damage the government is creating for all of our future. Unfortunately, it seems like it will take a very long time for true full reform.

So it's up to us -- all of us -- to build the internet we want. Together, we can build a space that is greater and a more important part of the world than anything we have today, but is also safe and secure. I'm committed to seeing this happen, and you can count on Facebook to do our part.