Facebook's first day on the stock market was much more underwhelming than expected, and New York's most aggressive tabloid wasted no time making its displeasure known.

Facebook shares, marred by technical glitches, rose only 23 cents from its initial price -- a disappointing debut for the company. But for the New York Post, the day was nothing less than a betrayal.

"ZUCKERS!" the front page of Saturday's edition blared. A story inside the paper was just as biting:

They were Mark Zuckerberg's cash cows.

Hordes of everyday New Yorkers played the fool yesterday to Wall Street fat cats and Facebook insiders, who used a bloated stock price to milk them of billions of dollars during an overhyped IPO.

With a $38-a-share price tag and forecasts for a 10 percent jump, mom-and-pop investors blindly bought in with dreams of instant riches that never came true.

Meanwhile, the social network's hoodie-wearing CEO finished the day with a net worth of $19.25 billion. The average Facebook employee saw their on-paper wealth shoot up to $2.9 million. 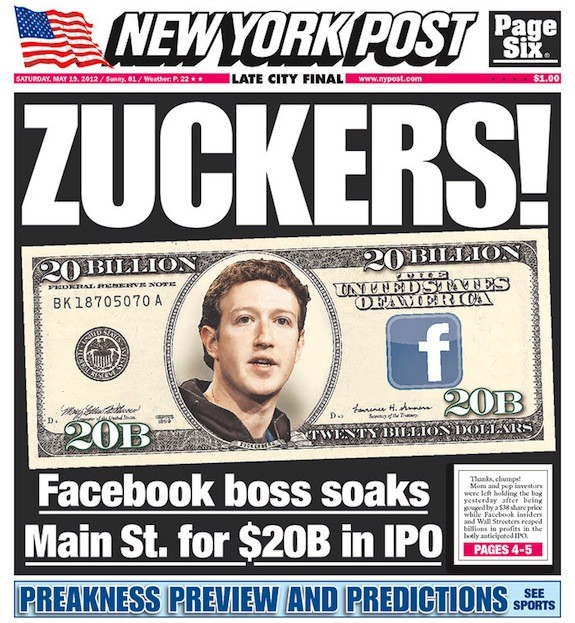