The music industry is a notoriously tough one to crack. With scores of musicians vying for recording contracts at labels such as Sony Music, the environment is intensely competitive. While it may seem like anyone equipped with a smartphone, a voice and a social media presence can become a star, the production process remains a challenge for many, even for those with music training. For beginners simply looking to learn the basics of music production, the learning curve is especially steep. SoundBridge, a startup comprised of a team of musicians, aims to change that. A MassChallenge 2016 Finalist, the company launched in January 2016.
Traditionally, the production process is multistep, with a variety of roles to fill - songwriters, engineers and producers. "There's a multitude of specialized talent that goes into making a radio-quality hit. You go to Hollywood [and you see that] there's a multitude of different hands involved in the production process," said Wake Anderson, founder and CEO of SoundBridge. "Musicians plays a small part in the entire production to get it to the radio-quality level." 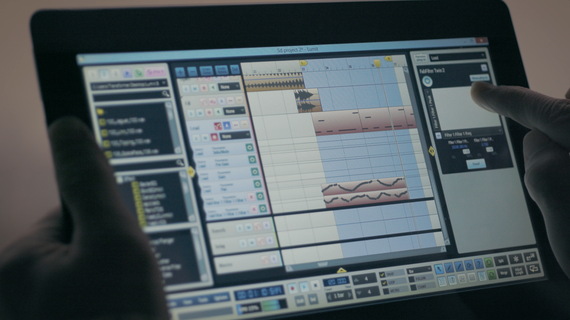 Soundbridge's product, Lumit, is a digital audio workstation that cuts down the learning curve to just 24 hours, simplifying the production process for musicians. With a simple interface, the tools a producer needs can be found on the main screen. The company partnered with SkyTracks.io, a Canadian company that provided server-based technologies to facilitate virtual collaboration.

"It covers everything from the physics of audio to audio engineering, fundamentals of music theory, synthesis, everything you really need to know as an aspiring professional audio producer. Pretty much a bag of secrets from one of the best in the industry," Anderson said.

In addition to the blog, Anderson said that a video curriculum called Lumit Academy covers the same music production topics and provides guidance on how to use the software.

Anderson, a longtime guitarist, said he was inspired to create Soundbridge by his own experience in recording. Studying jazz guitar with Berklee College of Music graduates from his hometown, Portland, Maine, Anderson was writing music by junior year in high school.

"Then I went to college and I got my first MacBook and GarageBand. I started to experiment with multitrack recording. I taught myself how to use it. I knew I needed access to more advanced tools to take the music to the next level," he said.

Taking music "to the next level" meant looking at more professional tools. However, it comes at a steep cost.

"The price point went to up to nearly a thousand dollars. So I decided not to buy it. I decided to look for solutions for free online and from there I kind of self-taught myself and the learning curve was tremendous."
Anderson pointed out the complexities of traditional tools, which require users to go through multiple steps to achieve the desired results.

"I was thinking of ways to simplify the process and really get the musicians the essentials they need. I started drawing my own user experience, just primitive mockups to cram essential functionality onto the screen...I also felt that the mouse and keyboard was a very unmusical interface to be interacting with," Anderson said.

In Anderson's junior year of college, he said he noticed people experimenting with touchscreen interfaces. In particular, a company called Slate Digital developed a multi-touch monitor gained popularity with students.

"You have the advantage of the computer, but you have a more human way to interact with a computer that mimics the hardware you'd find in a traditional recording studio. Every Windows computer had a touchscreen built into it. So I was like, why don't we build a software that works on all the touchscreens?"
The music landscape is also changing. Digital technology enables musicians to collaborate with each other more easily, and Soundbridge sees an opportunity to make that process even more streamlined.
"We see musicians collaborating with each other online and we're focusing on streamlining the process so you won't have to bounce between multiple applications like Google Drive and email and Skype to communicate," Anderson said. 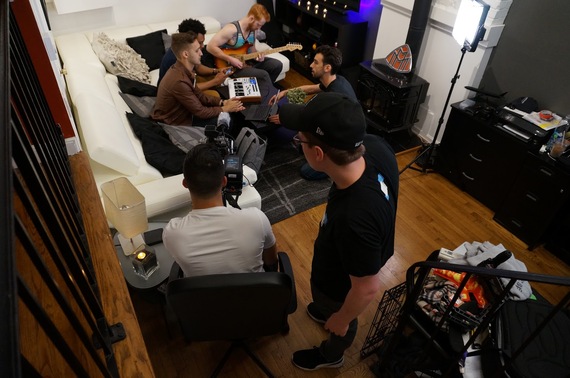 Soundbridge is designed to accommodate all types of musicians, Anderson said.
"Every musician has the opportunity to record themselves from their bedroom...So now, the software is applicable to the entire plethora of musicians."

According to Anderson, this type of technology can be applied outside of music.

"Voice narrators, recording of audio books, eventually video capabilities, podcasts, even journalists. So there's all kind of professional applications outside of music. Whether you're a guitarist, to singer, to pure electronic musician, you guys can collaborate like never before with the next product."

While the technology is versatile and can be applied to different fields, right now, Soundbridge is focused on helping musicians of all kinds produce music. The company addresses the economic concerns from recent music graduates.

"The music industry is...quite a bureaucracy. There's only a limited number of jobs for when you graduate from the Boston College of Music, let's say. There's really no guarantee you're going to get hired by Warner Brother or Universal, any of these established major players. You have to work as a freelancer," Anderson said. "It's going to democratize the entry into the professional music industry and it's also going to allow musicians to gain more work as freelancers."

"A lot of students teach music but I think everyone's desire in life is to be a part of a team that creates incredible music that can go into a larger production. I believe technology will allow people to work and mimic the assembly lines you see in Hollywood."