People in the United States probably knew very little and thought even less about corporal punishment until Adrian Peterson made headlines.

Then they all started talking.

Picture after picture of his four-year-old with bloody cuts all over his legs filled the web. Society was shocked that a grown man would do this to a four-year-old-child. Though Adrian Peterson pled no contest, meaning he neither admitted nor denied abusing his child, news articles reported that he confessed to hitting his four-year-old child. Nevertheless, everyone was talking about it. It spurred a national debate. How could a 6'1, 217 pound, 29 year-old NFL Star beat his child to the point it caused cuts and blood? Uniformly, the American people were alarmed. A discussion started.

Consequently, a national discussion started. People asked if parents should be allowed to use corporal punishment against their children. What are the effects of its use? Where is the line between appropriate physical discipline and abuse? Did parents have a right to physically discipline their child?

But something was missing from these questions. What was missing is the question, "Does someone else have a right to hit another's child?" How much more enraged would society be if another person made these marks on Adrian Peterson's son? This is happening. It is called corporal punishment in schools and it is legal in 19 states, including Louisiana.

Many people are oblivious to physical discipline at school. For instance, we have talked to many people, including teachers and legislators, who believe teachers and school faculty simply do not hit children. In fact, a Louisiana legislator who was a passionate, outspoken advocate against school corporal punishment recently advised us that corporal punishment stopped happening altogether during the last few years. With disbelief, we made our next move.

On September 21, 2014, we sent a public records request to the Louisiana Department of Education, requesting the number of school corporal punishment incidents for the 2011-2014 school years. On October 29, 2014, we received the data. It was revealing.

The data listed corporal punishment incidents by parish for each school year (for those not from Louisiana, parish is just another way to say county).

We started to analyze the data for the 2011-2012 school year. We then ranked the ten parishes with the highest rates of reported incidents of school corporal punishment for that year. 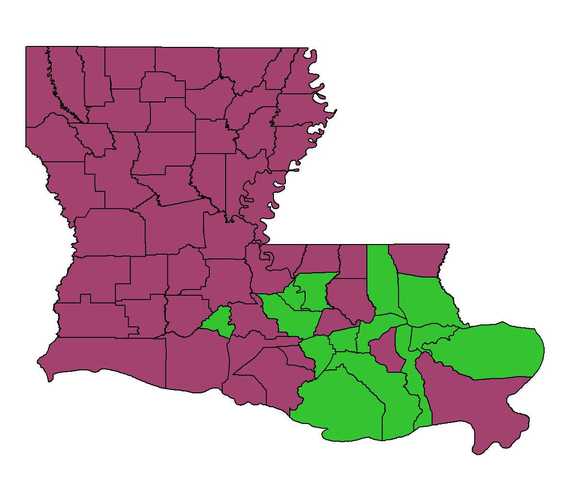 With this information, we studied specific demographics of these parishes. This included education level, race, income level, and religious affiliation. We also examined whether the parishes' communities were mostly urban or rural.

Did these parishes have anything in common? Was there a trend? What did the data show?

Below is the finding. 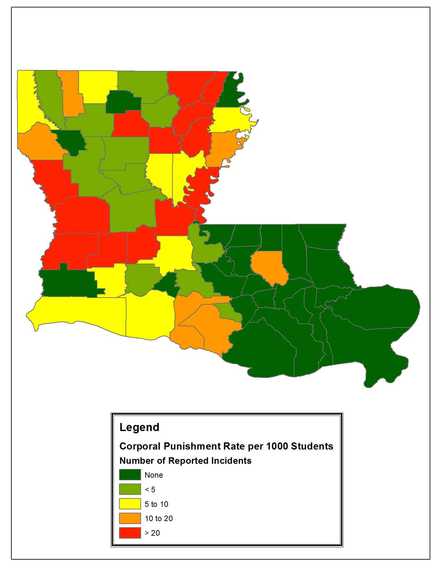 The ten parishes with the highest rate of corporal punishment have several things in common.

Table 1: Ten parishes in Louisiana with the highest rates of school corporal punishment in 2011-2012 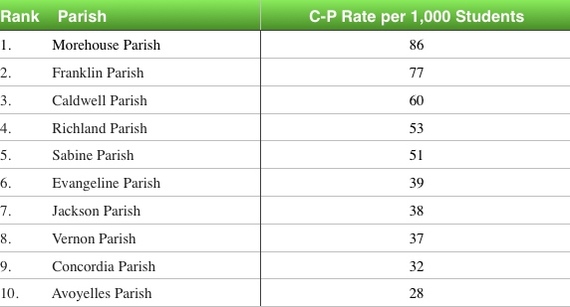 The most telling, however, is the level of education in these parishes. The ten parishes with the highest rate of corporal punishment tended to have fewer college graduates than the state's average and the national average of college graduates.

Table 2: Proportion of population with at least a bachelor's degree in parishes with highest rates of corporal punishment 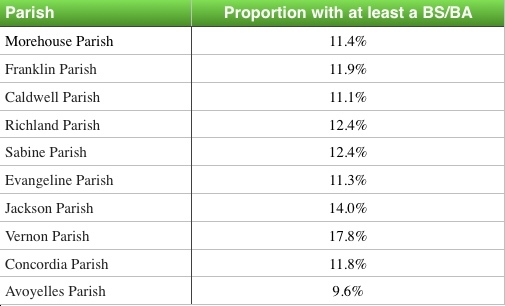 This may not just be a Louisiana trend. The top six states with the highest percentage of corporal punishment for the 2005-2006 school year were also reported to have the lowest number of college graduates in 2007, according to the United States Census Bureau.

According to an ESPN article, Palestine embraces corporal punishment. The ESPN article stated:

"The issue was never a matter of debate in Palestine: Peterson is not an abuser. In this surprisingly sprawling town of about 18,600, the switch and the paddle are as much a part of childhood as Sunday school, hunting and fishing; it is the sort of place where people are God-fearing, disarmingly candid and suspicious of outsiders who would suggest they're wrong for supporting corporal punishment or Peterson, their most famous native son."

Is all this data a coincidence or is there something to it? What do you think?