With the state of Iowa leading the nation in wind energy production, a packed crowd filled the Iowa City Public Library last night to discuss game-changing new power purchase agreements that could light up the famed "City of Literature" as a bright shining "City of Solar."

"Iowa has been a national leader in wind energy for years, but Iowa also has the potential to be a leader in solar energy as well," said Mike Carberry, a long-time clean energy advocate and a member of the Johnson County Board of Supervisors. "Sun power that grows all of our corn can also be used to grow electricity. We have the solar resource, now we just need the will to make it happen."

Less than 15 miles from Iowa City, in fact, the extraordinary work of general manager Warren McKenna and the Farmers Electric Cooperative (FEC) has won international acclaim for its role as a national model for solar financing and development. Recognized last year by the Solar Electric Power Association as the "Utility CEO of the Year," McKenna spoke about his pioneering solar work since 2008, including the establishment of one of the nation's first feed-in tariff systems. FEC has installed solar systems at area schools, launched a groundbreaking solar community garden, and now oversees the largest solar farm in Iowa. 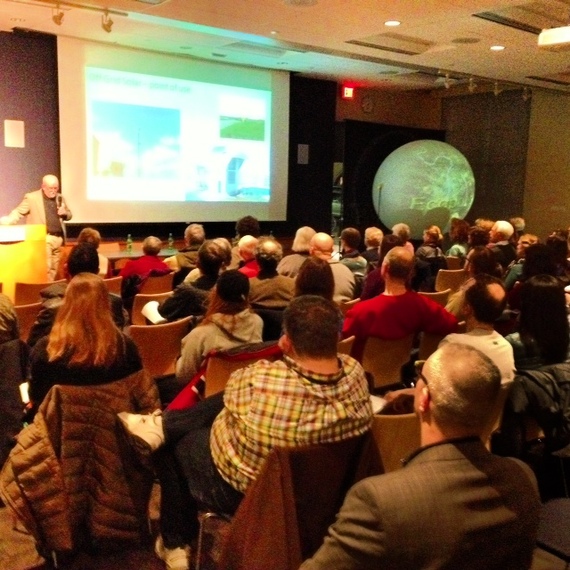 Speaking on behalf of Ecopolis Iowa City, a community forum on regenerative city initiatives that hosted the event, Miriam Alarcón Avil cited the state's high solar potential ranking in a recent Iowa Environmental Council study, which concluded that 20 percent of Iowa's electricity could be provided by rooftop solar installations.

The Ecopolis Forum members touted the breakthrough Eagle Point decision in the Iowa Supreme Court last year, which allows for third party power agreements, and effectively opened the flood gates for cost-effective solar energy initiatives in the state, and called on the city of Iowa City and the Iowa City Community School District to commit to a goal of 20-25% on-site solar energy on city buildings and new development projects with city funding within the next two years, along with energy efficiency requirements:

We, the undersigned, ask the city of Iowa City to adopt a requirement for 25% of the projected building energy use be provided by on-site renewable energy (solar, geothermal or wind). This shall apply to new construction and major renovations of city buildings and projects seeking city funding which have a construction budget of greater than $500,000 and city support greater than $75,000. 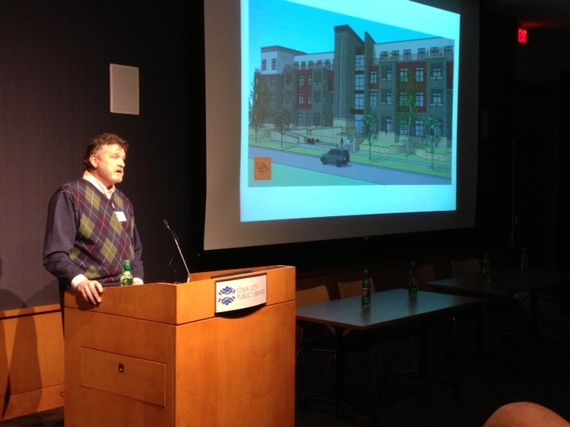 For his groundbreaking solar development in Iowa City, developer Kevin Hanick was awarded the "Tesla Award for Renewable Energy Innovation" by the Ecopolis Forum. Hanick, a past recipient of the Iowa City Area Association of Realtors Distinguished Service Award, plans to install over 700 solar panels on his private housing complex in the Riverfront Crossings District.

In fact, as several presenters noted, southeast Iowa has already established the groundwork for a solar energy boom. State Sen. Joe Bolkcom, who represents Iowa City, has been a leading sponsor of solar legislation. Last fall, Johnson County signed on to a new solar agreement for a road facility, according to Moxie Solar representatives, that will save $250,000 over the course of the 25-year agreement. The University of Iowa recently released a request for proposal for rooftop solar photovoltaic electric generating system under a power purchase agreement.

In the southeastern Iowa town of Wayland, the Waco School District recently announced plans to save $100,000 annually, thanks to a newly installed solar system.

"The potential for solar in Iowa is largely raw and and untapped," said Troy Miller, who made a presentation with Jason Hall of locally-based Moxie Solar. "The winners will be forward thinking communities, such as Iowa City and Johnson County, who are aware that the federal tax credits may disappear after 2016." 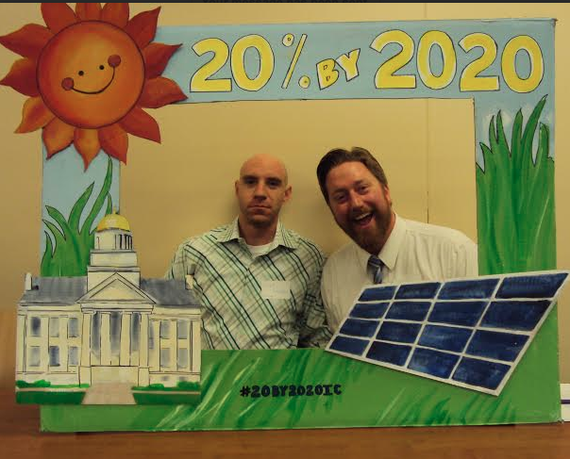