I love The Amazing Race, though reality shows reduce work for me and my entertainment colleagues. It's far more special than a recycled talent contest like American Idol (think Major Bowes, Ted Mack's Amateur Hour or Star Search) or a program like Survivor featuring repetitive stunts and ad nausea confabs as to whom will be backstabbed that week. That's why it's won the Reality Show Emmy six years in a row. 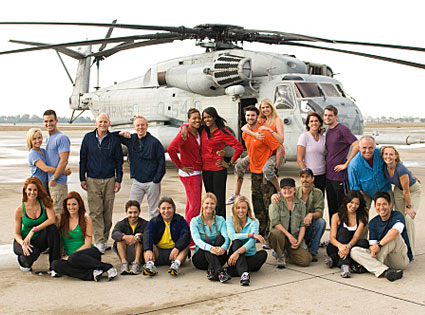 It's a show I'd love to do with my pal, charismatic German TV Star Andreas Stenschke (take a look at him), whose personality would clash with mine. However, program rules exclude anyone without a U.S. Passport, a lame restriction since Europeans are permitted to travel to countries Americans are prohibited from entering. Andreas and I would've had great fun and provided the show with lots of terrific segments.

I say this up front for fair disclosure, because I submit, with no sour grapes intended, The Amazing Race ain't what it used to be and doesn't accomplish nearly as much as it did in the first few seasons.

In the most recent race, Season 14 won by Tammy and Victor on May 10, the show visited eight foreign countries, didn't travel in as diversified a fashion, and wherever the teams wound up they stayed in the immediate region a lot longer than in earlier years.

The teams started in the USA and went to Switzerland for the entire episode. Day 2 was in nearby Munich where they stayed in the Bavaria area, ending up in Salzburg only an hour and a half away.

Day 3, back to Munich to catch a flight to Romania, a couple of countries over for the entire episode. Day 4 to Siberia -- finally a long distance -- where the show spent that leg and Day 5 in two Siberian cities. Then to India for Day 6 entirely in the Jaipur area.

Day 7, to Phuket in Thailand before heading to Bangkok for all of Episode 8.

Day 9, to Guilin, China for the entire show and then Days 10 and 11 were all spent in Beijing, where in the second of two episodes there were only three route markers before the pit stop.

Finally, the three teams remaining flew on the same plane from Beijing to Maui, where they responded to just three tasks, all locally based before crossing the Finish Line on the same island. My heart went out to Margie and Luke, who'd accomplished so much considering the extra challenges of a team communicating in sign language, as Luke is totally deaf.

Luke was ahead in the final Roadblock and was almost completed before the other two teams arrived, but became stymied at the end, allowing Victor to accomplish the task and head for the win with Tammy at the Finish Line. Had this happened after several elements, involving more traveling over greater distances and a trip back to the mainland as in other seasons, I wouldn't have been as bothered. Was it dramatic and good television? Yes. Fascinating to watch during the last moments? Absolutely. But one had the sense it was more of a sprint than the marathon the show is supposed to be.

Now, I'm not saying the teams didn't cover a lot of ground overall, but consider the difference between this season and Season Three.

The teams visited eleven countries, going from Los Angeles to Mexico City, (4 stops), and then traveled 90 minutes to Amacuzac. Day 2 was back to Mexico City to travel 800 miles by bus to Cancun.

Day 3, to London, then on to Cambridge and then up to Aberdeen, Scotland, all in the same show.

Day 4 they flew to Portugal and then 3 hours by train to Lisbon.

Are you getting my drift -- that it was maybe a little more involved?

Day 5, Cascais, Spain to take a ferry to Tangier in Morocco. After Tangier, they were off to Fez, 128 miles away.

Day 6, they traveled 143 miles from Fez to Casablanca, then 137 miles to Marrakesh to complete four tasks, including the pit stop.

Day 7, Marrakesh by air to Munich, before a train to Innsbruck (couple of hours), then an hour or so to Fussen, Germany.

Day 8, an hour to Friedrichshaven and 45-minute ferry to Romanshorn, Switzerland. From there to Rheinfall and then ninety minutes to Zurich. Later, an hour's drive to Lucerne and then three hours to Grindenwald and the pit stop.

Day 9 to nearby Kandersteg, then two hours to Montreux.

Day 10, an hour from Montreux to Geneva and then to Kuala Lumpur. In the same episode, three stops in that city and then seven or so hours by train to Singapore for three stops.

Day 11 from Singapore by air to Ho Chi Minh City in Vietnam for four tasks.

Day 13 (two hour series final) back to Danang, and then by train to Hanoi (15 hours). From there to Honolulu, and then to Kauai and back to the mainland in Seattle to meet host Phil Keoghan and the other contestants at the Finish Line.

In Season Two, from the USA to Brazil, then South Africa, to Namibia, to Thailand, to China, to Australia, to New Zealand, to Hawaii all before returning to the mainland Finish Line in San Francisco. Clearly more traveling than in recent seasons.

Being on the go constantly made it more interesting, because a team arrived somewhere and, after finding a clue, would travel long distances within the same country to find the next one. Now, teams pretty much stay in the Arrival City, travel to the outlying areas and then back to the city to complete the episode.

The clue markers are too close, and the slightest misstep makes it almost impossible to catch up. In past years, because of the necessity of driving or taking a train or a plane to another locale within the same episode, any number of things might befall the players. A mistaken choice of aircraft or the delay of one, the inability to catch the right train or bus, some bad driving directions, the breakdown of a car or an idiot cab driver.

These days, navigating a locality and/or the stupid cab driver are the most common ways to screw up. Because tasks are scheduled in anticipation of air travel to the next location, almost everyone has the chance to catch up at the beginning of an episode. This makes sense, because if it became a runaway no one would continue to watch.

In addition, fast forwards, allowing a team to complete a challenge and go directly to the pit stop, are not worth what they once were and rarely save more than one or two tasks, which are usually near the pit stop. In years past, the pit stop was sometimes thousands of miles away, and the fast forward team arrived much sooner. Events in the next show prevented a team from getting unreasonably far ahead.

They also rarely have teams consisting of two strapping guys in their twenties or thirties, probably because such pairings were the winners three times in the first four seasons.

Summing up, in its current form The Amazing Race provides fewer decision-making opportunities and clocks less mileage in each episode, thus diminishing the potential for bad luck affecting the teams. What's the reason? Smaller budgets from CBS? I can't imagine what else. Plus, the season finale is an hour instead of two hours as in the past. All this said, it's still the best of the breed, but I'd sure like The Amazing Race to be as amazing as it once was.