If your child has asthma or if your parent suffers from heart disease or if you are one of the millions of Americans who value clean air, then the Senate confirmation hearing for Gina McCarthy on Thursday will be of interest to you. McCarthy has been tapped to lead the Environmental Protection Agency, and given her track record of protecting America's families from toxic pollution, her confirmation will help us all breathe easier.

Throughout her decades of public service, McCarthy has proven to be a pragmatic and inclusive defender of environmental protections. She has worked both at state agencies and the EPA and has consistently demonstrated her commitment to public health and climate action.

Her leadership at the EPA could significantly improve our nation's air and water. When the EPA was created more than 40 years ago, Congress charged it with the duty of using the best science to reduce dangerous pollution. Most of EPA's standards are dictated by time-honored statutes like the Clean Air Act and the Clean Water Act. But in the past, some EPA leaders tried to gum up the works by postponing new safeguards and ignoring court orders to update standards. 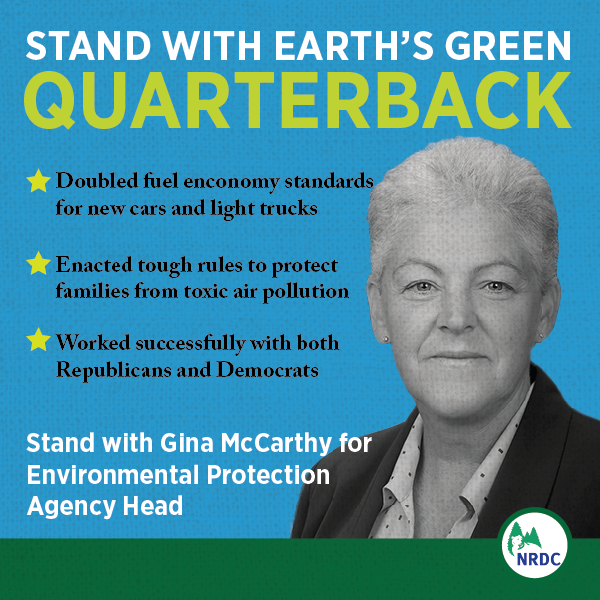 That is not McCarthy's style. She will keep the agency on track and move the nation toward healthier, cleaner days. Here is a short list of why McCarthy has earned our support.

1. Protects Families from Dangerous Pollution
McCarthy helped establish the EPA's first-ever national limits on mercury, arsenic, lead, and other dangerous pollution from power plants. Mercury is a potent neurotoxin that damages developing brains in children and fetuses. Now dirty coal-fired plants that fought standards for decades will finally have to clean up their act. McCarthy also helped strengthen safeguards against soot pollution. Soot is made up of fine particulate matter released from coal-fired power plants, oil refineries, and cars and trucks. This particulate matter can lodge deep in the lungs and do lasting damage to our respiratory and cardio-vascular systems.

2. Leads the Way on Fighting Climate Change
McCarthy has long been a champion of climate action. During her time as the Commissioner of Connecticut's Department of Environmental Protection, she helped launch the Regional Greenhouse Gas Initiative to curb carbon pollution from power plants in nine northeastern states. In its first three years, RGGI brought $1.6 billion in economic benefits to the region, reduced climate change pollution by 6 percent, saved consumers more than $1.3 billion in energy costs, and created 16,000 job-years. More recently, she helped propose the first-ever limits on carbon pollution for new power plants. The EPA received 3 million comments in favor of the carbon standards -- the most the agency has ever gotten on any topic in its history.

3. Helped Save Americans Millions of Dollars at the Gas Pump
McCarthy helped deliver one of the best weapons we have against rising oil prices: cars that go farther on a tank of gas. Over the course of several years, she worked effectively with the Department of Transportation, the auto industry, and environmental groups to craft new clean car standards that will raise automobile fuel efficiency to the equivalent of 54.5 miles per gallon on average by 2025. These standards will save drivers $1.7 trillion at the gas pump and cut our oil imports by one-third. They also represent the biggest step America has taken to reduce carbon pollution and combat climate change.

4. Is a Fair-Minded Professional Who Reaches Across the Aisle
McCarthy is a consummate professional who has earned the respect of industry executives and environmental groups alike. Scott Segal, a lawyer with Bracewell & Giuliani, a Houston law firm that represents energy companies, said: "Gina McCarthy is engaging, effective and willing to listen to the regulated community -- even if we don't always agree with her final rules."

She has also garnered support from leaders on both sides of the aisle. Connecticut's Republican Governor Jodi Rell and Massachusetts' Republican Governor Mitt Romney both appointed her to run state environmental agencies, and President Obama nominated her to the EPA. In fact, Republican and Democratic senators already easily confirmed McCarthy by a voice vote during her 2009 confirmation for head of the clean air division of EPA.

5. Listens to What Science Says about Public Health Threats
McCarthy has served in many administrations, but she takes her most important cue from science. The EPA's legal responsibilities require a commitment to scientific integrity as well as the need to incorporate new scientific developments. McCarthy oversaw an EPA rulemaking that reviewed and synthesized a vast literature of climate change science. That research served as the foundation for a landmark agency determination that greenhouse gas pollution endangers our health and welfare. Under her leadership, the EPA also conducted scientific reviews into the dangers of lead, sulfur dioxide, and smog-forming nitrogen dioxide pollution that led to the strengthening of national health safeguards against these pollutants. All of these actions were upheld in court in the face of industry challenges to EPA's scientific findings.