This post has nothing to do with taking your clothes off. But it is very revealing.
Confirmation that the world is flat (to quote Thomas Friedman) can be found in Kenya, Tanzania and Rwanda. East Africa has been transported from the 10th century to the 21st thanks to the cell phone. Hundreds of millions of them in fact.
They're ubiquitous here in the Serengeti (see photo taken with my cell phone!) 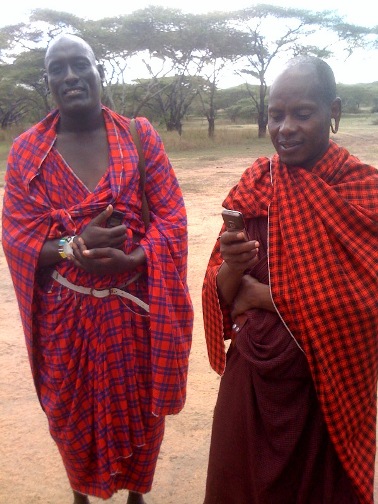 Our Maasai guides, who live in dung covered huts and whose tribe measures wealth by the number of cattle, carry their phones (along with their machetes) under their shukas. With the help of mobile devices and information shared by researchers, Maasai can now find where to bring their herd instead of roaming for hundreds of miles in search of water and pasture.
They also now know what the going price of cows is... not to mention what their wives expect them to bring home tonight. Although these warriors and other Africans can easily purchase the phones (the price of a goat,) seconds (let alone minutes) are less affordable. So they've learned a third language. First Swahili. Then English. Now Flashing.
Flash language gets around tariffs quite effectively. Mobile phone users ring (or flash) once to say "I am on the way." Flashing twice means "I'm waiting for you;" and thrice translates to "I am home!" These definitions were provided by two Peace Corps workers we met in Rwanda. They're learning the lingo as part of their un-official orientation.
This is really no different than the signaling that went on between my parents and me when I was in college... decades before cell phones. I'd call collect from the dorm phone; my parents wouldn't accept the charges. They'd then call me back without an operator as a less expensive option. As telecommunications evolve so do the 'short cuts.'
Our time in Tanzania provided other examples of our increasingly flat world. 5 years ago when my family and I were in South Africa and Botswana our safaris were lengthy adventures with no guarantees of animal sightings. Now, guides can ensure customer satisfaction by texting each other the coordinates of a cheetah kill or a pride of lions. There still has to be one tracker who hits pay dirt, but chances are, by the time your jeep arrives on the scene you'll have company.
Thomas Friedman's "The World is Flat" focused on commerce and globalization. But the 'flatness' resulting from technology has huge implications for Africa.
One Kenyan we spoke with said he believes that increasing connectivity de-mystifies the inter-tribal relations within his own country and across the continent as a whole. He told us that while these relations have historically led to xenophobia and even violent conflict (as was the case in Rwanda), the prevalence of cell phones has fostered a new, larger sense of community that is glossing over tribal differences.
Perhaps that's wishful thinking, but technology is playing a more direct role in combating violence. A new human rights project, initiated by George Clooney, combines satellite imagery analysis and field reports with Google's Map Maker technology to deter the resumption of war between North and South Sudan and the world's next genocide.
With the cameras' unblinking eyes it will certainly be harder for countries like ours to feign ignorance, but perhaps the 'flattening' of our world will one day render these precautions unnecessary.