Vladivostok, Russia: May 2013
After ten straight hours of working, Dan Tannenbaum needed to take a break. For the noted producer, the mastermind behind tracks for artists like Dr. Dre and Emeli Sande, this usually means stepping out of an L.A studio or Time Square office. But this time he was stepping into a three-wheeler truck for a quick spin in the forests of Vladivostok, Russia -- just hours shy of the Chinese and North Korean border.

"It was a really beautiful place," reminisces Dan, "it looked just like a classic Russian city. It was not as big and grand as Moscow, but small and cultured with lots of Soviet era architecture throughout. There was a sense that history had happened in this place."

Yet, it wasn't pursuit of the past that brought Tannenbaum here. Instead, it was a firm focus on the future of a talented young Russian singer with an interesting day job, Natali Yura. At 23 years-old, the gifted artist does double duty as aspiring singer and CEO of her family's construction business, (launched by her parents when she was just a toddler.) Yura first caught Tannenbaum's attention weeks earlier when a chance meeting led to him hearing, "Scream For Love," a dance pop song Yura released in 2013, which reached the Top 10 on the Billboard Hot Dance Club Play chart. 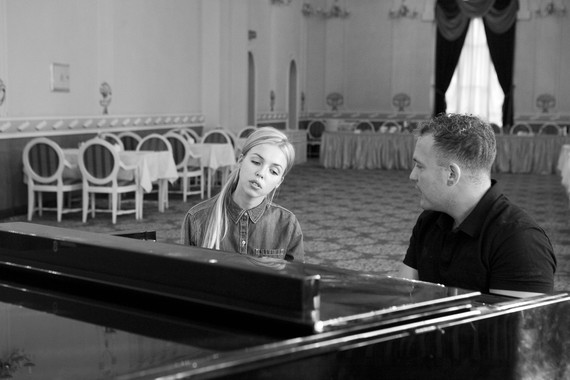 Yura and Tannenbaum, during a recording session.

"She has the type of exotic voice that sounds like its from some other sphere," says Tannenbaum of his first impressions of Yura's sound. "The structure of the vocal chords and how they grow and are used are impacted by your environment. It shapes your voice. With Natali, you can hear all these influences in every word she sings."

For Tannenbaum, transforming that distinctive tone into a hit single was the main motivation. The structure, melody and even subject matter of the single had haunted him since hearing Yura's music. Now that he'd made his way to Russia, all he needed was a few days to work his magic. But it wasn't long before Tannenbaum realized his singer was just as elusive as the single.

"Monday through Friday we'd have two hours allotted where we'd sit at the piano and talk about music while doing vocal warm-ups," Tannenbaum remembers. "In every other moment she was out with lawyers and working this deal and that deal."

Despite Yura's work schedule, the producer persisted -- finally scoring some dedicated time to craft the song properly. The last stage of the recording session included Tannenbaum's long time collaborators DJ Khalil, Chin Injeti and songwriter Sizzy Rocket. Their production process culminated unexpectedly in Tokyo, where all four collaborated on refining sound, style and lyrics. "When it came time to record her voice -- there was no good recording facilities in the town. Tokyo was the closest place where she could go without too much of a hassle or time away from the office. It made the whole process that much more intense."

The end result was the crown jewel of Yura's upcoming album, 'Yung Luv' -- a sultry and sophisticated single which feels hauntingly modern. Upon second listen, it's easily reminiscent of young stars like Lana Del Rey and Lorde who have debuted as young ingenues in the modern era.

While her day job makes her markedly different from both, it's Yura's ability to communicate deep emotions in her singing which makes her simpatico with the two.

"A great artist is a translator of what their audience, their generation are feeling," Tannenbaum weighs in. "And that's what Yura does with every single song she records. Seeing that level of talent is surreal because she's also a young girl with a crazy job -- which she's passionate about. But she steps up to the plate with both(singing and business) and works really hard at both."

Asked if her career could negatively impact Yura's singing aspirations, Tannenbaum doesn't hesitate in his response.

"Never. Her dedication to it only signifies her drive. Between that, her fashion sense and her sound -- it's a perfect storm for a new kind of celebrity."

NEW YORK CITY, July 2014
I'm seated in a dimly lit cafe in the upper east side when Natali Yura appears in front of me. Despite the best possible plans, this is not an in person meeting -- but a skype call. Between prepping to promote her upcoming single and running the family business the singer/CEO has her plate full. As she appears on my computer screen, her greeting is warm, her manner friendly and her presentation as chic as one would expect of an aspiring pop star. But the sprawling office, complete with spreadsheets and binders confirm a different story: this is a busy woman with little time to spare. We exchange small talk -- and Yura cracks a joke about our video interview.

"It's crazy, I know! But I love this business as much as I'd love a boyfriend. I'm committed!"

Despite her humour, Yura's mother confirms to me that the family business is something her daughter has been serious about since she was a child.

"When Natali was small, we were young parents with a new business," she shares. "Natali's father would always play games with her like monopoly and she would compete with him very hard. If she didn't win, they couldn't stop playing."

Yura's brand of ambition took her all the way to the Lee Strasberg Theater and Film Institute in New York City, where she studied acting, before switching gears to focus on her music and her family business. It was during this phase in her life that noted film producer Martin Bregman of Scarface, Dog Day Afternoon and Carlito's Way met Yura through her manager Joseph "Osya" Aranov.

"She is a very ambitious girl with talent to match," says the legendary producer. Since their initial meeting, Yura has also worked with Bregman's son, Michael, producer of the The Bone Collector, as director on her forthcoming videos.

"She's magnetic," enthuses the younger Bregman on his initial impression of her. "People's eyes do not leave her until she exits the room."

It's this star-power that inspired him to sign on to the project. Since then he's witnessed first hand the young singer balance between managing the family business in Russia and building her music career in the U.S. Despite the rigours, Yura shows almost no signs of stress and strain. Her smile is quick and easy and her eyes light up at any mention of the single which took five people, four cities and three months to produce from start to finish.

"It was a long process," she says with a smile, "Even the actual recording itself took five straight days." Ironically, capturing the perfect take of the song seemed to be the swiftest portion . "I remember there was no light. I didn't see the guys. I didn't see the microphone. I didn't see anything in the dark. The whole experience was surreal and emotional."

Penned by up and coming writer, Sizzy Rocket, the single explores the tension between submitting or fighting a heady love affair.

"For me personally, the music goes to your heart and your soul," says Natali of why she chose this as the first single from her upcoming album. "It is beyond words."

With the song scheduled for release soon, the hope is that audiences will feel the same, igniting the seemingly overnight sensation that singers like Lana Del Rey and Lorde have. While Yura shares a different provenance and backstory than the two -- she also shares similarities.

For one, her tone -- a low, sultry, haunting timbre -- transports the listener to some of Del Rey's classic hits, from "Video Games" and her latest, "Young and Beautiful."

For an American audience, her persona, foreign in culture yet familiar in it's fierce independence is reminiscent of Lorde, the Australian singer who continues to earn accolades since debuting her hit, "Royal." Yet according to the younger Bregman, it's a third similarity which is even more telling about Yura's potential.

"She works hard, is tremendously dedicated and talented -- plus she has that 'It' factor which I've seen in several of the superstars whom I've come in contact with during my years."

With such a promising music career in front of her, how will Yura maintain balance between both jobs? It's the last question I post to the singer/CEO as we wrap on our call.

"That's tricky!" she laughs. "I'm not actually sure how to answer that."

After a few moments of reflection, she looks up and says, "Actually, I don't know that I need to answer that. It's not easy to maintain both. But you know what? It's where I want to be. All my life, I've travelled back and forth in pursuit of my passions. I love my jobs -- both of them."

Her response was not surprising. She answered the question like a boss. Because, after all, she is one.

Check out Yura's music and learn more about her at Natali Yura Online.