Life Cycle is a series of posts that follows the secret lives of your stuff. 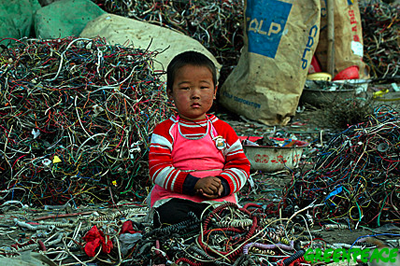 Recently, the world computer population surpassed 1 billion. It's a legion of artificial intelligence that will never die, at least not while humans are around to see it.

The computer species appears to have a high mortality rate (whether due to the rapid progress of technology or an industry conspiracy to ensure that products must be replaced regularly). They "crash" and "die" in droves, their human counterparts literally kicking them to the curb. But there is no heaven, no place in the clouds, for the cold, hard shell once warmed by electrical currents. Once it has left your desk, your computer doesn't disappear. In a sense, it lives on.

Each year, ten million computers land in the toxic graves that are landfills. Nestled among other CPUs and laptops and monitors, their lifeblood oozes out, leaking hazardous materials such as lead into our earth and water sources. Like many products we discard, defunct computers are dead to us but remain a force with which the earth must reckon.

Despite the eco-warning, we're not trying to take away anyone's computer. To paraphrase a line that recently amused us in the 1946 film noir gem The Postman Always Rings Twice, "Stealing a man's wife, that's nothing. But stealing his computer, that's larceny." (We're substituting "computer" for "car," perhaps an apt update on the ultimate symbol of modern freedom and access.)

But be aware, it takes even more energy and resources, pound for pound, to produce a Dell than a Dodge. A 2004 study at United Nations University found that desktop computers require 10 times their weight in fossil fuels and chemicals to manufacture, versus two or three times for cars. This energy-intensive process depletes resources and makes a significant contribution to climate change.

A computer's energy usage has just begun once it leaves the factory, though. In your hands, a standard desktop PC sucks up to 300 watts when in use, nearly half the amount used by your refrigerator It's worth noting that if your computer carries the "Energy Star" sticker and was made before July 2007, the label is somewhat bogus--until that date, the rating only factored energy use while in "standby" mode.

Computers have had their share of positive environmental impacts, such as reducing our paper trail and rendering CD production archaic. But their birth, life and living-deadliness have downsides that you can minimize:

Never toss a computer in the dumpster. It's illegal in most states, and deplorable in all states. Most cities have annual collection days for electronic waste. If your machine is salvageable, find a local company or organization that repairs or beefs up computers for re-use.

Reduce your tech sidekick's impact by programming it to shut down when not in use for, say, 20 minutes (it's hogwash that doing so degrades the machine).

When buying computers, look for greener machines. Dell is one manufacturer attempting offset carbon emissions by investing in green technology. Consult the Electronics Products Environmental Assessment Tool before you shop. Biodegradable plastics and other production improvements mean computers one day might die a natural death.

Next time, we'll kick it Jane Fonda style and look at the eco-implications of your workout.

This post was written by Sarah Smarsh and Simran Sethi. Thanks to the University of Kansas School of Journalism and Lacey Johnston for research assistance and to Greenpeace for the image.

You can catch previews of this and future posts on Green Options.