At the age of 10, Eden Hasson is already a talented surfer — but even a professional would be spooked by the experience Eden had earlier this week.

At a beach in New South Wales, Australia, the young surfer caught a wave while his dad, Chris Hasson, took photos from the shore. On this particular ride, Hasson noticed a shadowy figure swimming beneath his son ― and he captured the moment on camera.

“Just as he is taking off I see something out of the corner of my eye,” Chris Hasson wrote on Facebook. “I keep shooting and after he finishes and starts paddling out I zoom in on the second photo and see he’s just done a backhand snap on an 8 foot Great White Sharks head.”

The photo shows what appears to be a shark near Eden’s board, right below the surface.

Shark researcher Andrew Chin told the Associated Press that the shark could be a great white. However, while we might think of great white sharks as dangerous creatures, Chin said this shark did not look aggressive and instead looked “spooked.”

“There is no way that this is a hunting approach,” he told the AP.

Photo 3: Eden Hasson: Shark Whisperer...Background to photo. Up Northern for the late surf. Storm in background. I'm on the rocks taking photos of Eden. I see a big dark shape and about to call the small group in and Eden takes of on a left and smashes it to the beach. Just as he is taking off I see something out of the corner of my eye. I keep shooting and after he finishes and starts paddling out I zoom in on the second photo and see he's just done a backhand snap on an 8 foot Great White Sharks head. Call everyone in and show them the photo. Lucky he didn't fall off. This photo is going straight to the pool room. Not everyday you get a photo surfing over a big white. Check its mouth. It's rolled over having a good look at his yummy yellow new wetsuit. @edenhasson333 @livyg333 #grom

After his dad showed him the photo, Eden said he was relieved he didn’t see the shark while he was in the water.

“If I was on the wave and I saw it I probably would have freaked out and fell off,” he told Australia Today. “I was lucky I didn’t fall off.”

But the harrowing experience won’t keep Eden out of the water. According to the Sydney Morning Herald, the young surfer was back in the water the next day. 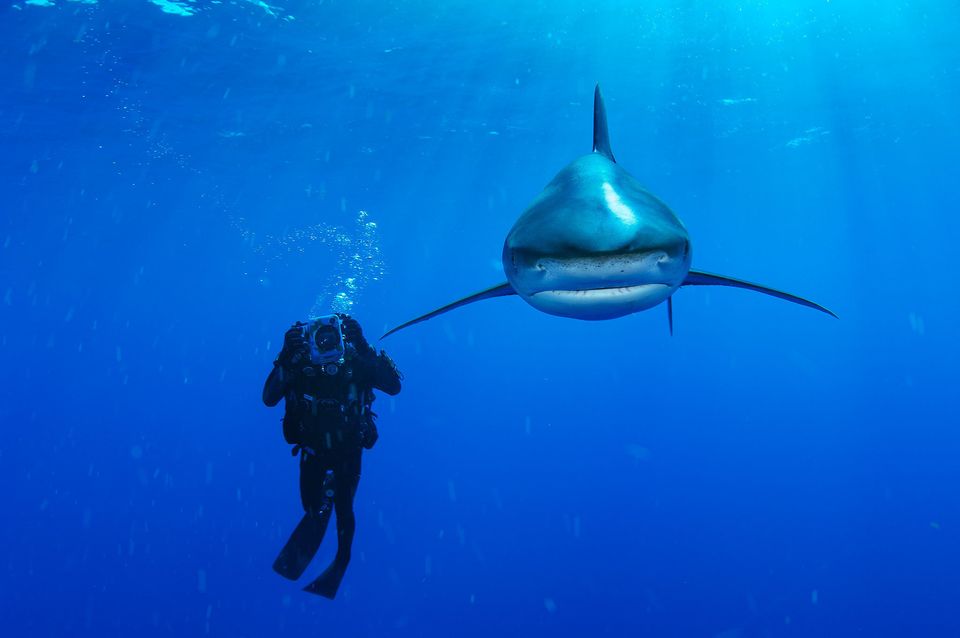 1 / 4
Despite its reputation as a devourer of humans stranded at sea, this nine-foot-long oceanic whitetip swam past biologist Wes Pratt without incident.&nbsp;Skerry explored shark habitats in the Bahamas for the March 2007 magazine story "<a href="http://ngm.nationalgeographic.com/2007/03/bahamian-sharks/skerry-photography" target="_blank">An Eden for Sharks</a>."&nbsp;
PHOTOGRAPH BY BRIAN SKERRY