I've elected not to breed -- from a very young age I just never thought of myself as a mother. I've never pictured myself in that role, even though I didn't know what I did want from my life.

There are three reasons that this decision has been problematic or frustrating over the years; I doubt you would be able to guess them all.

1. No government incentives for me

My choice has placed me in a minority group in society, that of the childless couple -- and childless by choice at that. I don't get additional money from the government for anything, no tax breaks or designated car parking for me.

I do get to have nice things that don't need to be protected from the grubby hands of small children, peaceful weekends, and a marked choice in how I spend my time, money and energy though -- so I'm generally ok with this.

Most people seem to believe that my decision about how I use MY body has something to do with them, so they feel the need to comment on how I'm doing it wrong. Some of my favourite themes are:

Being constantly told by people that they know me better than I know myself, and they know how I'll feel about this later in life, isn't even the worst part of it. Although, I get extremely pissed when people say I will never know true love or joy without children -- do you say that to people who desperately want children and can't have them???

No, I think the worst part of knowing from a young age that you never want to use your reproductive system in anger, is that you still have to maintain it! If I were a guy, no big deal -- well except I'd have a scrotum and... hmm, let's leave that there.

But I have a uterus that goes through the motions of preparing for an event that will never occur, every 28 days -- and it's annoying. It's like even my own body says to me "are you sure you don't want kids?" or "just a reminder that you can still try if you want."

Note: not talking about the fun bits here, it's the pesky baby producing bits.

I've spent about 31 years going through the monthly maintenance program of periods (ok, I did skip quit a few in my time), bi-annual Pap smears (at least not annual now) and of course the cost of not getting pregnant -- financial and physical. Quite frankly, I'm over it!

Now I'm 43 I can convince a doctor to let me get my tubes tied so pregnancy will no longer be an issue. But the uterus is still there, periods are still there; as a result I've opted to let my partner get the snip instead, far simpler. Also, I'm pretty anti-pills and devices at this stage in my life. The risks associated with most of these things once you are over 40 are concerning, and I'm not willing to have a device inserted in my body at this stage, merely for the "chance" of not getting a period. 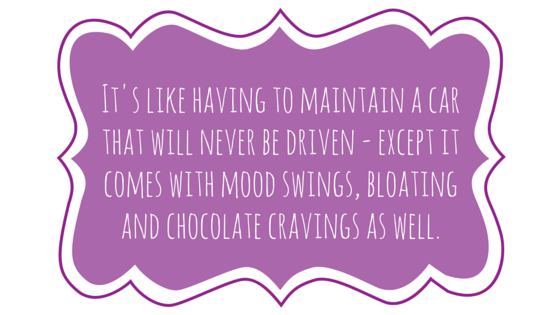 Why do others even talk about how I use my uterus?

I don't regret my decision not to have kids, it's one of the few decisions that I've never questioned -- even though I did try to conceive a child with my second ex-husband. Very long story, but he wanted one desperately. We agreed he would look after it, turns out I didn't conceive because of a pituitary cyst; going through the neurosurgery to remove it (with complications), helped me see he wouldn't have been a capable primary caregiver for a goldfish, let alone a child. I see that as the universe saving me from a bad decision, and my "no-kid" mindset firmly reasserted itself.

I do wish society would shut the hell up about being childless though. If you ever feel the need to pass comment on whether someone has no children, think about the fact that (a) they might not be able to, regardless of what they say is the reason; and (b) it's none of your fucking business anyway, no matter who they are in your life.

It's annoying enough that I have to maintain my uterus, and that it can still disrupt what I want to do for five days a month! I don't need your casual commentary about being childless to accompany that process. I think we all need to remember that a woman's reproductive system is not a social commodity. You don't get to tell us how to use it; when to use it; what to do, or not to do with it; or judge us by our choices. After all, we're not likely to forget that our bodies are designed to produce children, they remind us often enough as it is.

I'd say bring on menopause, but knowing my luck I'll be one of those women who has a hard time in that process as well!