My friend America has decided to marry a bad boy, despite others' warnings about what a cad he is. Like many women who fall for abusive men, she rationalizes his bad behavior, makes excuses for his verbal violence, and sticks with him despite all the evidence of what a bastard he is. She believes his empty promises because she desperately wants a hero - someone to take care of her.

"But I love him," America replies.

"He's arrogant and full of himself," I point out. "He brags about how rich he is. He flaunts his wealth as if it's a measure of his manhood. He thinks you should be impressed with of his big, fat bank account, and the ginormous buildings that bear his name."

"Yes, I know it seems tacky the way he flaunts his money," she admits. "But you misunderstand - he's just proud of his success. He wants me to know that he can take care of me."

"I might believe that if he treated you right," I counter, "But he doesn't. He always dominates the conversation. If you dare to disagree with him, he interrupts and talks over you. If you question or doubt him, he complains that you're 'not treating him fairly.' And if he doesn't get his way, he pouts or throws a tantrum."

"Oh, he's just being dramatic," she laughs. "Sure, he blows off steam ... but he gets over it right away. Before you know it, he's back to being charming. He's just a bit of a hothead sometimes. He doesn't really mean anything by it."

"Oh my god, he's got you brainwashed!" I exclaim. "Where's your self-respect? He's got you making excuses for his bad behavior! When are you going to wake up and dump him? There are plenty of other fish in the sea, you know. There are some great guys out there who would love to have you - and your vote. They would treat you right!"

"I can't, I just can't leave him ..." she muses. "He's so strong and confident ... I feel safe and secure when I'm with him. And he really gets me - he always knows just the right thing to say. He isn't such a bad guy, really. You just don't understand him. I know he loves me ... he tells me all the time."

"He doesn't love you!" I practically scream in exasperation. "What has he ever done for you? Has he ever given you anything? No. Has he ever sacrificed on your behalf? No. If he loves you so much, what's he been doing all these years? He only loves you for what you can do for him. He's a narcissist. It's all about him - it's not about love."

"No, no, no, you're wrong about him," she protests. "He has big plans for us. He promises to protect me; he promises prosperity and happiness; he promises whatever my little heart desires. I believe him. I trust him. I know he'll deliver on those promises."

"You're fooling yourself," I say. "He doesn't love you. If this relationship doesn't go his way, he'll dump you in a New York minute. You're just a trophy to him - you validate his ego. You're a prize catch, a notch in his belt. But once you give him what he wants, he'll soon lose interest and move on to chase a new trophy. Mark my words. He'll never be faithful. He's a player. And all those promises he makes - they're empty. He's simply saying whatever he thinks you want to hear."

"I don't believe you!" she says, on the verge of tears. "He loves me. He really loves me! I know he does. I can feel it in my bones. He says we're GREAT together! You just wait and see ... you're so wrong about him!"

And so it goes. Voters love Trump the way women love bad boys. Trump fans put up with all kinds of bad behavior because they are mesmerized by his larger-than-life persona; they are reassured by his big promises; and they are impressed with the way he doesn't take crap from anyone. Most of all, they love the way he plays to their feelings - the way he validates their anger, fear, insecurity, and frustration. These people are hooked on Trump ... they are "Voters Who Love Too Much."

Like all love affairs, this one began with great promise. Trump was the fair-haired boy who stood out from the crowd. People were drawn to his financial success - he must be smart with all that money, right? Fans loved The Donald's showmanship and flair - after all, who doesn't enjoy being entertained? And they're thrilled with the idea of "making America great again" - it appeals to their longing to feel special, to be exceptional, to lord their superiority over other countries.

And like every love affair, this one has its problems. So OK, no relationship is perfect. Yes, Trump is coarse and vulgar - but his fans prefer to think of him as a "diamond in the rough." Oh sure, he shoots off his mouth when he doesn't know what he's talking about. But you know ... he's in show business, where the motto is: "Fake it 'til you make it." And yes, sometimes he can be a bit of a bully. But hey, you gotta admit, nobody can touch him. After all, it's a dog-eat-dog world today - only the strong survive - we need a tough guy.

Yes indeed, Trump fans are like women who love bad boys. They're gonna stand by their man.

There's nothing any of us can say or do to convince our friend America that she's making a terrible mistake in hooking up with this abusive guy. And we wonder: What it will take for her to come to her senses .... and will it be too late? 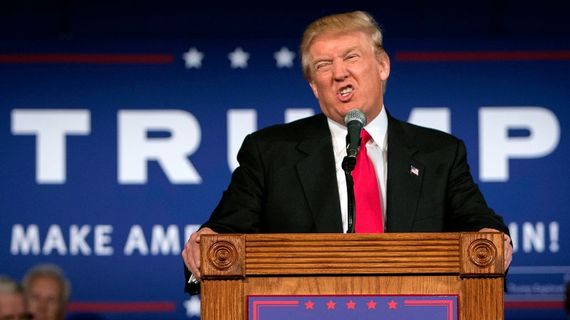 BJ Gallagher is a Los Angeles writer, the author of over 30 books, including an international best-seller, "A Peacock in the Land of Penguins: A Fable About Creativity and Courage" (Berrett-Koehler; 2015), now published in 23 languages. Her new book is "Leadership Secrets from the Wizard of Oz" (Simple Truths; March 2017).