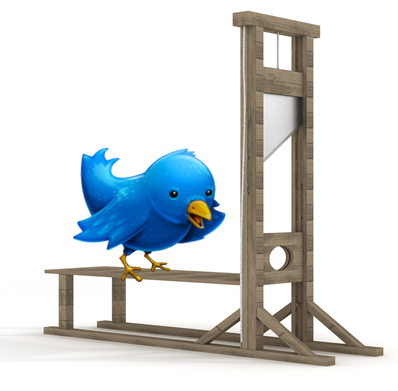 Starting today, Bastille Day, I'm releasing my entire debut novel--The French Revolution--on Twitter. As far as I can tell, it's the first full-length literary novel ever released via tweets.

The short answer is: nobody. The internet is a universe of abundance, overwhelming us with creative videos and fascinating articles and a Pandora's Box of endlessly entertaining distractions. With this reality in mind, I don't expect people to read my whole novel online.

However, I do think you might actually read a few 140-character snippets of my novel, and--based on that sampling of Junot Diaz-style wordplay meets Jonathan Franzenish multilayered plotting--consider reading more, and even sinking some money into it.

Beat up Twitter all you want--the one truth they understand is that people will actually pay attention to very short messages. People read text messages, and they read tweets, because it only takes three seconds to check it out and move on. On the other hand, good luck getting someone to respond to lengthy emails, even if they're brilliant. Most people just don't have the time to dig through it.

Amid this information maelstrom, tweeting my novel provides the ultimate in easy sampling and information triage before purchase, the equivalent of watching a clip of a TV show before deciding to order the season on Netflix.

Twitter also gives me unmatched control and speed. I can tweet The French Revolution out as fast or as slow as I want (I'm starting off with bursts every minute for the first page, followed by tweets every 15 minutes--lemme know what you think), but even at just one tweet per day I'm moving faster than traditional publishers. I can get instant feedback from readers, and we can discuss the intricacies of the characters and plot twists as they develop. It's an ubercool way to grow a community and, ultimately, a market for my work.

That said, I didn't write The French Revolution in short, burstable, Twitterific sentences. I wrote this novel for lovers of literary fiction, with long and loving sentences, exploding with imaginative descriptions and inventive plot twists and characters I hope will stick with you for a while. Twitter is the delivery mechanism, not the defining structure. While I think my whiplash sentences will be compelling in 140-character bursts, it also may backfire.

I'm willing to take that chance. Publishing needs to change, and while I'm not going to revolutionize the industry on my own, I think I can help nudge it toward a more dynamic and customer-friendly future.

Besides, it's Bastille Day. What better time to try something zany?